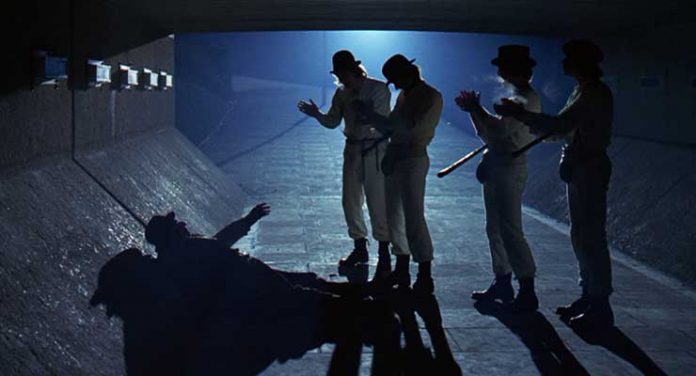 A Clockwork Orange (1971) revolves around teenager Alex (Malcolm McDowell), who is a psychopath and leader of a gang, that constantly commits crimes in a post-apocalyptic Britain. After his arrest, the film focuses more on the protagonist and questions many issues about morality, human rights and science.

A Clockwork Orange makes a reference at the beginning to juvenile delinquency. That happens through the protagonist Alex, who tends to commit crimes like stealing, raping and assaults with his peers, who have formed a kind of gang. It is implied that he has been caught by the police and sent to juvenile a detention center about due to his violent behavior in the past and the danger of ending up in jail does not seem to make him feel fearful at all. However, as time passes, he loses control over his gang, which helps contribute to his arrest.

A Clockwork Orange also deals with issues like science and the dangers of it when it is considered as an end in itself without paying attention to the human factor. It questions the idea of experimenting on humans regardless of their condition, the will of a person to change, and the boundaries of it. It makes the viewers wonder if it is actually worthy of changing human personality traits and to what extent and in which way this should happen. It leads us to criticize by ourselves whether we would agree with such an experiment.

It deals with morality, not only of the protagonist, but of others, such as the morally ambiguous police officers and social workers in Alex’s life, a clear double standard. Politicians’ roles are also of great importance, since everything is controlled by the opinion that potential voters will have, nullifying the human existence. It is related too with the idea of social rehabilitation of convicts and it questions whether forgiveness is possible in parental terms.

Although the first thirty-minutes of the film can be characterized as a little disturbing to watch, I would not say that I found the movie as much disturbing in terms of violence as I have read and feared about it. If there is actually something shocking, it is mostly what it is implied, not so much what the viewer sees. On the contrary, I have to highlight that a good job was done making some gloomy or creepy scenes funny in an absurd way, either through dialogue sometimes and mannerisms, fashion choices of characters like fancy wigs or set designs. Sarcasm and irony are conspicuously present in the film making the viewer laugh and alleviating the dark atmosphere.

Malcolm McDowell was excellent in his role playing sadist Alex. He managed to wonderfully convey a combination of the characteristics of a mentally unstable person and the youthful immaturity of a teen. The fashion choices of the squad give the squad a combination of absurd and classic appeal for viewers. I  found interesting the performance McDowell delivers when we experience this radical change of personality traits. Although Alex is a character we cannot help hating,  his whole evolution through the story it gives us food for thought and the actor succeeded in his part.

Stanley Kubrick was very good at creating the atmosphere of a post-apocalyptic world, full of anarchism and dismantled in terms of morality. One of my favorite scenes is when Alex is forced to watch some films and it feels like we dive together with him into this world, as if we became part of the movie. Kubrick is great at turning images of every day experience or unnerving scenes into something completely different and artistic. As a result, many emotions arise, making the whole thing even more convincing and intense in a positive way, as it leads to my full engagement.

To be honest, I did not expect anything mediocre from John Alcott, as I have seen his cinematography skills in another film before and I was satisfied. There are some scenes in the beginning with some shadows in the night, which evoke an imminent feeling and remind us a little of film-noir, giving us a premonition of something ominous. There is a focus mostly on internal house cinematography and decoration, both in classic and in absurd ways highlighting the situations. The set design also helps aesthetically with the use of period modernity, such as cassettes for example. In fact we see a mixture of vintage details with then-modern modern elements such as in the milk shop. Alcott gives a futuristic aspect to a film that carries many elements from the past.

I do not have a good relationship with Kubrick’s films’ endings, as he generally likes to follow the logic “back to square one”. I cannot reject A Clockwork Orange’s finale as it is a great movie in general and I cannot say that the ending disappointed me especially. I would also be satisfied if the ending titles were earlier, but it does not bother me either. It is just not my favorite part of this film, which does not mean I did not like it. On the contrary it was a nice effort, but I prefer to focus on other elements of the movie, like the plot concept, acting and cinematography.