Blinded by the Light (Film Review) 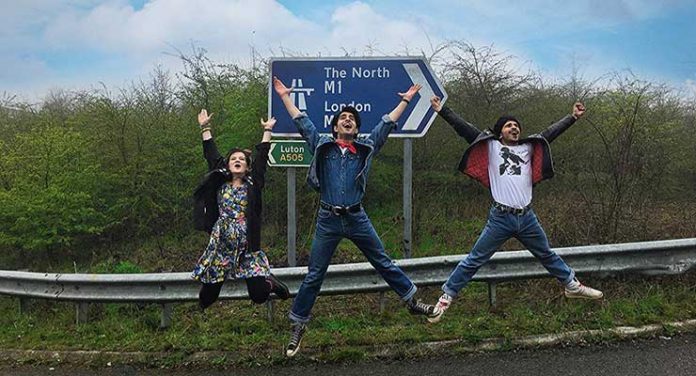 Taking its title from Bruce Springsteen’s hit record,  writer/director Gurinder Chadha  has adapted a memoir by journalist Sarfraz Manzoor who cowrote the script along with Chadha’s husband Paul Mayeda Berges about his obsession with the legendary rocker.

It is 1987 and Javed Khan (Viveik Kalra) is a secondary-school senior living in Luton, England with his Pakistani immigrant parents Malik (Kulvinder Ghir) and Noor (Meera Ganatra), sister Shazia (Nikita Mehta) and cousin Yasmeen (Tara Divina). Javed is an aspiring author who has written poetry and kept a diary for most of life. His best friend Matt (Dean-Charles Chapman) is a rock star wannabe who offers to help Javed “get a girl.” Everything changes when Javed’s classmate Roops (Aaron Phagura) introduces him to the music of Bruce Springsteen and he finds an immediate connection to the lyrics of the Boss’s songs.

Unbeknownst to his very strict father who wants him to become a successful businessman, Javed is studying English literature with Miss Clay (Hayley Atwell) who sees promise in her student and encourages his literary efforts. If he does well in school, Javed hopes to leave home and attend Manchester University that is sufficiently distant from his family so that he will be on his own. The young man gets unexpected support from his proper English neighbor Mr. Evans (David Hayman) who has found one of Javed’s discarded poems decrying the National Front or NF, a neo-Nazi white supremacist group that has it in for the Pakistanis and is planning a march on the local mosque.

These are trying times for the Khan family as Malik gets laid off from his factory job and has to rely on Noor’s earnings as a seamstress and the money that comes his children’s part-time jobs. Javed worms his way into the affections of another classmate Eliza (Nell Williams) by introducing her to the Springsteen songbook.  There are two dramatic cruxes in Blinded by the Light,. The first occurs when Javed buys tickets for a Springsteen concert at Wembley Stadium that are torn up by his father. The second takes place when one of Javed’s essays wins an all-expenses-paid trip to Monmouth College near Springsteen’s hometown in New Jersey. After his father forbids him to go, Javed must decide between following his dream or avoid being banished from his family.

With Springsteen songs and some of their printed lyrics weaving in and out of the film, the audience gets drawn into the main character’s obsession with a performer who seems to speak directly to him.  Similar to the style of Rocketman, there are some breakout song-and-dance routines to monster hits like Born to Run that provide much-needed feel-good moments for a story that has numerous emotional ups and downs.  Chadha does not shy away from her criticism of Prime Minister Margaret Thatcher whose austerity programs cost people like Malik Khan their jobs.  The creative team also exposes the brutish nature of the swastika-bearing skinheads whom they figuratively skewer on the big screen.

Blinded by the Light is another well-crafted effort by Chadha and company, much in the same vein as Bend It Like Beckham, as it deftly deals with the generation gap between traditional immigrant parents and their offspring. This film will play with viewers’ hearts and minds, as it takes them along on a young man’s voyage of self-discovery, triggered by some righteous anthems as only Bruce Springsteen could compose.  This is one of the very best films that I have seen this year and I would not be at all surprised if it received serious consideration by the 2019 Oscar committee.   Highly recommended.

Blinded by the Light begins its theatrical run on August 16, 2019