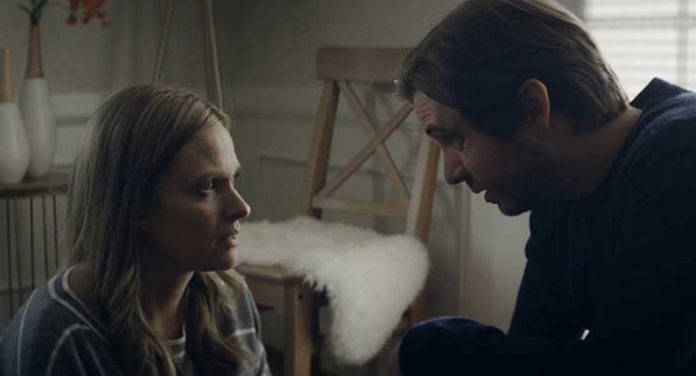 Dr. Jane Mathis (Vinessa Shaw, The Hills Have Eyes) is a psychiatrist who specializes in treating post-traumatic stress disorder (PTSD). As the curtain rises on Clinical, a deeply disturbed adolescent, Nora Green (India Eisley, The Curse of the Sleeping Beauty), attacks Dr. Mathis with a shard of glass and then slits her own throat.  Jane goes into a two-year tailspin and,  gradually recovering thanks to medication and psychotherapy administered by Terry (William Atherton, Defiance), resumes her practice. Her social life has also improved and she has started to date policeman Miles (Aaron Stanford). An out-of-the-blue call comes from Alex (Kevin Rahm, Mad Men) who pleads with Dr. Mathis to help him cope with his PTSD. When Alex arrives at her house (that doubles as an office), we see a horribly disfigured and lonely man who cannot remember the night of the car accident that nearly killed him. Jane begins to work with Alex but when he breaks into her house during a bout of somnambulism (possibly a side effect of his medications), she ceases his treatment. However, after Alex subsequently overdoses,  Jane changes her mind,  helps him to recover, and resumes his psychiatric care.

Strange things are starting to happen to Dr. Mathis. A loud noise outside of her house rouses her and ominous music suggests that something bad is in the offing. Later during a morning run with Clara (Sydney Tamiia Poitier, Chicago PD), Jane thinks that she sees Nora. Dr. Mathis eventually finds out that Nora survived her attempted suicide and has spent two years in a psychiatric hospital under the care of Dr. Saul (Nestor Serrano, The Last Ship).  Much to Jane’s surprise, Nora has recently been released when the funds for her hospitalization ran out after her father died. Dr. Mathis finally has a breakthrough with Alex and when he remembers the night of his accident the real nightmare is about to begin for her.

Writer/director Alistair Legrand has cooked up a psychological thriller with many plot twists that keep viewers constantly off-balance and quite uncertain about which way this film is heading.  In the same vein as popular slasher film franchises like Halloween (this film takes place during the Christmas season), Clinical succeeds in making us very afraid, and parlays those fears into one hundred tense  minutes, punctuated by episodes of graphic violence during which the boundaries that divide reality from fantasy are stretched quite thin. Vinessa Shaw nails her role as the psychologically damaged doctor who unwittingly has opened an emotional Pandora’s box when she takes on her penultimate case. The film’s truly bizarre backstory is only revealed during a violent denouement that recalls The Invitation. Kevin Rahm’s portrayal of the hideous patient with a secret agenda develops very gradually and becomes riveting. John Frost’s (Diabolical) cameras aim at the out-of-focus world of a doctor who needs prescription drugs to make it through the day and enhance the deliberate confusion of the events, real or imagined, that populate this film. There are some loose ends, particularly during Jane’s drug-induced visions, but, for the most part, this is a suspenseful film with a final homage to Gaslight that will ultimately shock its viewers.