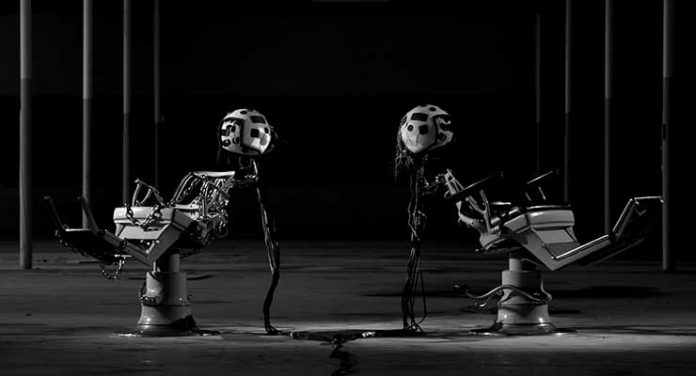 Joel (Zack Robidas), a bigshot venture capitalist has a multi-million-dollar deal go sideways and he ends up losing everything, including his reputation. He and his actress wife Jessica (Kathy Searle) are forced to move in with her retired parents and start their lives over. Floundering and at a loss for how to get back on top, Joel meets an old acquaintance, Nicolaus (Eric Berryman) who offers him an investment opportunity that seems like it’s too good to pass up.

Nicolaus and business partner Lester (Jay Klaitz) are working on an advanced virtual reality technology they call XVR – extreme virtual reality—for their company, Empathy, Inc. It creates an incredibly real virtual world that allows their wealthy clients to feel what it’s like to live the life of the underprivileged in order to gain empathy.  Joel disregards Nicolaus’ warnings to stay away from the technology as it is only for clients and not for investors. After his first trial run before investing his father-in-law’s retirement funds, Joel becomes obsessed and keeps sneaking back in to use the XVR, but after a couple of very violent experiences he realizes that the XVR may not be quite as virtual as Nicolaus and Lester led him to believe.

The production values of indie films can often times be a hindrance to a really good story. Often times black and white photography is used with good effect to cover up some flaws in production but is also a lot of times used to add weight to stories that aren’t very good. In the case of Empathy Inc., the black and white both adds gravitas and helps veil the film’s low budget, but the story is definitely a good. It is taut, surprising, and almost noir. Robidas puts in a wonderfully paranoid performance under the taut direction from Yedidya Gorsetman and the solid screenplay of Mark Leidner. Visually, the stylized black and white and minimal visual effects make the film one worth sticking with until the last frame.

4 / 5 TheaterByte Rating
{{ reviewsOverall }} / 5 Users (0 votes)
Rigel Films | Dark Star PicturesStudios & Distributors
USACountry
EnglishLanguage
96 Mins.Run Time
2.40:1Aspect Ratio
Yedidya GorsetmanDirector
Mark LeidnerWriter
13 September 2019Release Date
The Film
Summary
A venture capitalist who lost everything invests in a new virtual reality startup that turns out to be less virtual than he was led to believe in this edge of the seat sci-fi indie thriller shot in stark black and white that only adds to the film's paranoia.
What people say... Login to rate
Order by: