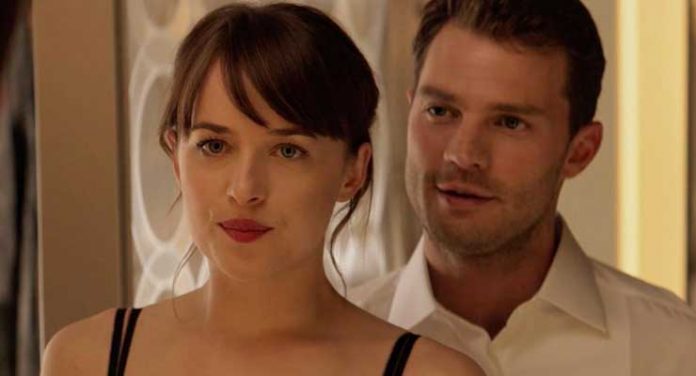 James Foley takes over the director’s chair from Sam Taylor-Johnson who led this film’s  Fifty Shades of Grey predecessor, and actually delivers a film that can mostly stand on its own two feet without collapsing into a pile of rumpled sheets. Anastasia Steele (Dakota Johnson) had walked out on young billionaire Christian Grey (Jamie Dornan) at the conclusion of the first film and has a nice entry-level job at a publishing firm reviewing manuscripts for editor and serial womanizer Jack Hyde (Eric Johnson). Christian has had regrets about how his so-called relationship with Ana ended and tries to make amends, beginning with the purchase of all of the large framed photos of Ana being shown at a local art exhibition. Gradually, Ana begins to warm up to Chris’s wiles, and they resume an affair that goes from fairly conventional to mildly kinky (as in the Ben Wa silver balls scene) to multiple varieties of bondage. Ana tries to continue her conventional professional life but when Jack makes an aggressive move on her, he gets canned for his improper behavior. Christian buys the publishing company, eliciting one of film’s few memorable lines, Ana: “I want a relationship, not ownership.”

A fundamental and perhaps dubious premise in this second installment of the Fifty Shades trilogy is that people can actually change. In this case, Grey begins to open up about his troubled past, including his childhood with a now-deceased drug addict mother, his adoption by truly caring parents, wealthy Carrick (Andrew Airlie) and Dr. Grace (Marcia Gay Harden) Grey, and adoptive brother Elliot (Luke Grimes) and sister Mia (Rita Ora). Kim Basinger turns in a truly nasty Cruella DeVil impersonation as the much older woman who introduced Christian to the world of kinky sex. While the frequently incendiary sexual attraction between Ana and Chris drives this film forward, there is more dramatic substance than its predecessor possessed. There are added elements of suspense, including the recurring appearance of Leila (Bella Heathcote) a clearly unhinged young woman who was a part of Christian’s past. But will we get a Cinderella/Prince Charming ending? Those who have read the book will already know the answer while those that have not will just have to watch until the end credits roll.

The business adage that sex sells is certainly in play here. This is an unabashed “guilty pleasures” film that will mostly appeal to the large audience that has already read the steamy E.L.James books.  For the rest of us, this remains pretty much standard soft-core porn cinema, although this second installment in the Fifty Shades trilogy is more attentive to character development and storyline.  The chemistry between Johnson and Dornan that was so lacking in Fifty Shades of Grey is better stirred up as well.  Production values in both sight and sound are quite good with some great scenic views of Seattle and a very catchy Danny Elfman score. Even if you have not read the three 50 Shades novels (and they are largely literary drivel), Fifty Shades Darker hammers home (pun intended) the unsubtle message that, for some viewers,  sexual fantasy might prove better than sexual reality. The final part of the trilogy, Fifty Shades Freed, is in the can and will be released in February 2018.