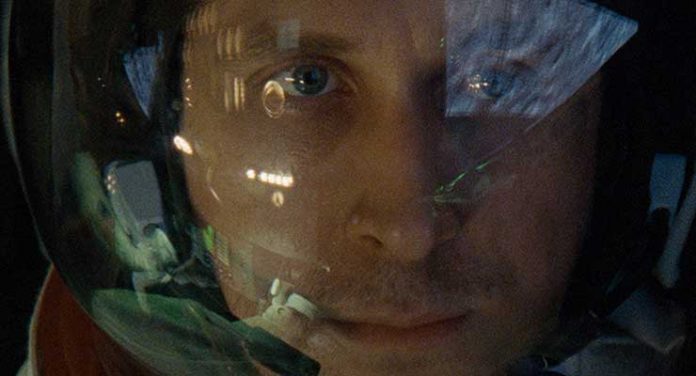 Although NASA’s last lunar mission Apollo 17 took place in 1972, it was the first person who walked on the moon on July 20, 1969 that fueled the world’s continuing fascination with space travel. First Man, based on James R. Hansen’s biography of the late Astronaut Neil Armstrong,  reunites La La Land’s director Damien Chazelle and his lead Ryan Gosling as the titular hero.

The screenplay opens as Armstrong, an engineer and X-15 test pilot, has just completed a perilous flight out of Earth’s atmosphere. Armstrong gets chosen for the new astronaut program, but his excitement is short-lived. His family life is soon shattered by the death of his young daughter Karen, a loss from which the astronaut never completely recovers. Neil and his first wife Janet Shearon (Claire Foy) move to Houston and bond with neighbors Ed White (Jason Clarke), the first man to walk in space, and his wife Pat (Olivia Hamilton).

Deke Slayton (Kyle Chandler), Chief of NASA’s Astronaut Office, taps Armstrong and David Scott (Christopher Abbott) for the Gemini 8 mission that will attempt docking with the Aegina module, an essential first step for a roundtrip to the lunar surface.  Their assignment succeeds, although an uncontrolled roll nearly does them in before Armstrong regains control of the spacecraft. In a subsequent test of the Apollo 1 module, tragedy strikes as Commander Gus Grissom (Shea Whigham), Roger B. Chaffee (Cory Michael Smith), and White die in an electrical fire.

Two years later, the path is finally cleared for Armstrong to head the Apollo 11 flight to the moon, accompanied by Buzz Aldrin (Corey Stoll) and Michael Collins (Lukas Haas). First Man tracks the days leading up to liftoff and the emerging stress lines in the Armstrong marriage, as Janet insists that Neil tell his two boys that there is a chance he might never see them again.  When Apollo 11 finally takes off and Armstrong and Aldrin do their moon walks, the success of this mission becomes almost anticlimactic given all the mounting tension that has preceded it. One of many small strokes of genius in this film is its starkly silent ending, contrasting sharply with all the previous noise of space flight. Gosling, still quarantined in a NASA facility,, simply stares through a glass partition at Foy as the magnitude of this historic event exceeds any attempt to put it into words. 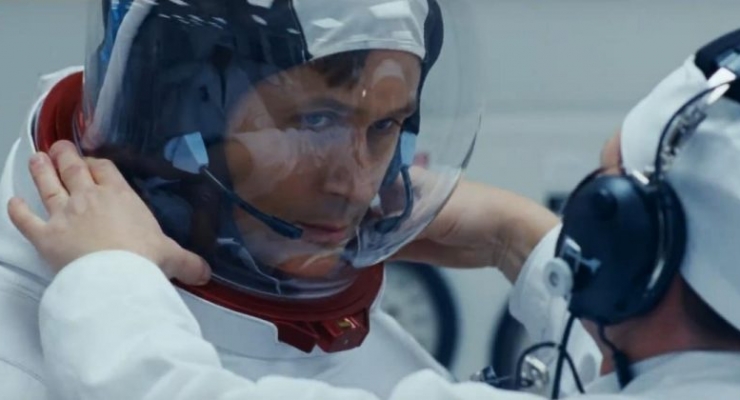 Acclaimed docudrama screenwriter Josh Singer (The Post, Spotlight) has given director Chazelle a superb script blending Armstrong’s personal story with judiciously selected NASA spaceflight scenes. The real hero of this production may well be cinematographer Linus Sandgren (La La Land) whose cameras take us into the very heart of space travel with extended cockpit sequences replete with noise, blur, and shakes that clearly expose the challenges of each extraterrestrial mission. There are also numerous documentary clips showing the backdrop of the era, the public demonstrations against the space program, and the rapt international audiences witnessing history being broadcast on their televisions.

This a strongly cast film with Gosling giving an authentic depiction of the laconic space hero who subordinates his ego to NASA’s missions. Equally powerful is Claire Foy’s anxious wife whose husband’s life is endangered every time he enters the cockpit.  All of the actors portraying the actual astronauts and NASA’s leaders successfully recreated the real-life characters to which each was assigned. I was also impressed with Damien Chazelle’s work behind the cameras as First Man was such a major departure from La La Land. Chazelle absolutely nails the challenges of turning a much-told story into an entertaining big screen drama. One of the very best films that I have seen this year and one that I expect to receive serious Oscar consideration. Highly recommended.