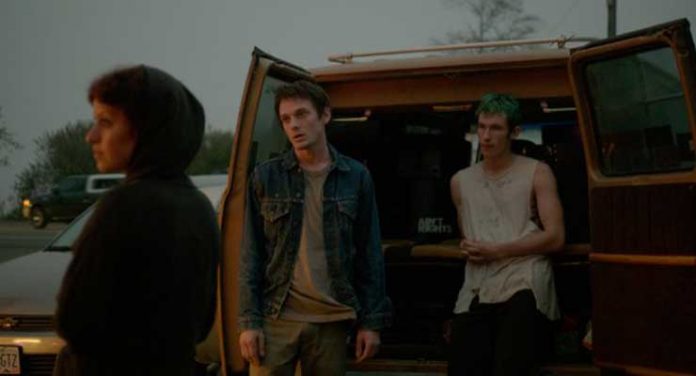 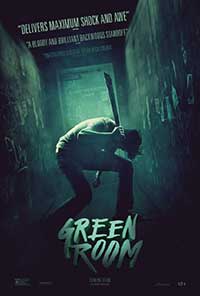 The Ain’t Rights are not the most successful band around, and they’ll play anywhere, anytime for some cold hard cash. So when they get invited to perform at an Oregon bar they jump on the opportunity. The group, whose members include Tiger (Callum Turner) the band’s vocalist, Reece (Joe Cole) the drummer, Sam (Alia Shawkat) the guitarist, and Pat (Aton Yelchin) the bassist, don’t know what type of crowd, or the type of venue, to expect, all they know and care about is that they are going to get paid. But the crowd is not the most hospitable, and at

first don’t take to the group’s music. But after a few songs the crowd gets into it, and when their time slot is up they head to the green room. It’s here where they find a dead body, surrounded by a couple of guys who ‘work’ at the bar. This is when they realize that they have stumbled onto something sinister, and something illegal, and they immediately try to run away. But what they don’t know is that the club is for white supremacists, run by Darcy Banker (Patrick Stewart), and they weren’t supposed to see the dead body, but now that they have, Banker and his gang of thugs won’t let the band leave. In fact as the band are witnesses to a crime, Banker plans to not let the band live! It’s up to each band member to escape the clutches of Banker and his boys to get the hell out of there.

Green Room is a taut thriller that takes us on a ride from the unknown to the downright scary. As the band fight for their lives, Banker and his associates also attempt to fight for theirs, not realizing how tough the band members are. Written and Directed by Jeremy Saulnier (who wrote and directed the acclaimed 2013 thriller Blue Ruin), here he ups his game and gives us a roller coaster of a ride featuring a very good ensemble cast.