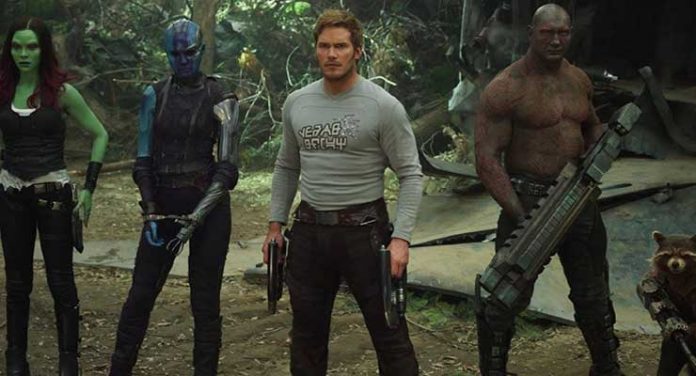 I can’t believe it’s been 2 years, give or take, since the first Guardians of the Galaxy premiered in theaters and here we are again for Vol. 2! Guardians of the Galaxy Vol. 2 reunites the group of miscreants Star Lord (Chris Pratt), Gamora (Zoe Saldana), Rocket (Bradley Cooper), Groot (Vin Diesel), and Drax (Dave Bautista). Rounding out the primary cast of familiars is Karen Gillan as Nebulla and Michael Rooker as Yondu.

The year is 2014 and the Guardians find themselves doing some freelance work for the Sovereign. When all is said and done and cash is received it is found out that Rocket has stolen some batteries from the Sovereign. In order to send the message that no one crosses the Sovereign, Ayesha (Elizabeth Debicki), Queen of the Sovereign send her legions out to destroy the guardians. They are mysteriously destroyed by someone who at first glance appears to be a friend.

After crash landing on a mysteriously empty planet someone claiming to be Star Lord’s father enters the picture. He claims to be a Celestial and goes by the name of Ego (Kurt Russell). Ego keeps an empath with him at all times named Mantis (Pom Klementieff). She can tune into anyone’s emotions and feel what they are feeling. This makes for great comedy relief as she goes around the room feeding off of everyone’s emotions. Ego and Star Lord spend a lot of time together catching up and getting to know one another. While the family reunion is welcome there’s something quite off about the whole thing. Is there an ulterior motive? This will pit members of the team at odds with each other.

There are many sub-plots involving the team and non-team alike. One of these involves Ayesha contacting with the Ravagers to hunt down the Guardians. Yondu gets put into a bind, because he’s Star Lord’s surrogate father, more or less, and his Ravager kin-folk don’t like that he’s helped the team out in the past. This puts him in a bind, as he is shunned by the Ravagers and space pirate community. 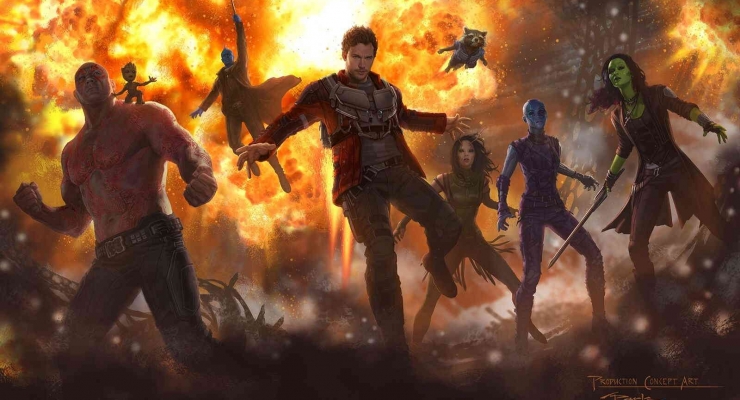 I think the first film wins by a hair, because it knew when to hold back on certain characteristics of the team. In this second installment, we have baby Groot being adorable as hell, but they seem to focus on him way too much — like past the point of parody. Yes, he’s cute, move on. The same goes for Drax and his ticks. We get it, he takes everything literally, but let’s continue with the story. Things like that bugged me. What didn’t bug me was everything else. The visual effects, secondary characters, cameos galore, Ego, etc., the film is truly an epic feast for the eyes and ears.

Towards the final act — who knew there could be so much depth in a “silly” comic book film? Not me. Writer-director James Gunn really hit the emotional tones in just the right and thrilling way. No, I won’t tell you what happened. There are 5 end-credit sequences, but no after-credit scene. Some are fan service, with one hinting at future things to come in, what I suspect, will be Vol. 3.

Yes, Guardians of the Galaxy has a lot going on, but it has tons of heart and is easy to follow without being overwhelming. The majority of the action, exposition, and humor works without it leaving the viewer lost. I should also give props to the soundtrack and score department. There’s one scene in particular where two characters actually dissect a song featured in the film, which was hilarious, because it’s so random. In any event, Guardians of the Galaxy Vol. 2 should be experienced on the big screen.

4.5 / 5 TheaterByte Rating
{{ reviewsOverall }} / 5 Users (0 votes)
Walt Disney Pictures | Marvel StudiosStudios & Distributors
PG-13 (for sequences of sci-fi action and violence, language, and brief suggestive content)Rating Certificate
USACountry
EnglishLanguage
136 Mins.Run Time
2.35:1Aspect Ratio
James GunnDirector
James GunnWriter
5 May 2017Release Date
The Film
Summary
Guardians of the Galaxy Vol.2 is a terrific spectacle that follows up 2014's first film with ease.There's lots of stuff happening at all times, but it never feels like the viewer is being pummeled with information. The Blu-ray or Ultra HD Blu-ray should be killer!
What people say... Login to rate
Order by: