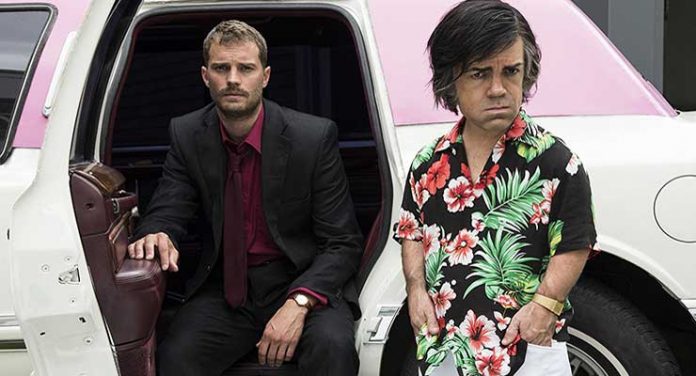 With My Dinner with Hervé HBO chronicles the last days of one of the stars of the late 1970s hit TV series Fantasy Island. Breathes there a man with soul so dead, who never to himself hath said: I really do miss Fantasy Island! From 1977 to 1984, the ABC Network transported millions of armchair hedonists out of their everyday lives to a place where their wildest dreams could come true. The individual fantasies of each episode were engineered by Mr. Roarke (Andy Garcia) and his diminutive assistant, Tattoo, played by Hervé Villechaise (Peter Dinklage). With a title that appears to be an homage to Louis Malle’s quirky docudrama, My Dinner with Andre, HBO Films time-travels its audience to 1993 as it chronicles Villechaise’s final days.

Down-at-the-heels journalist Danny Tate (Jamie Dornan) is assigned to conduct a snarky interview with author/personality Gore Vidal (Michael Elwin) who is currently number one on his magazine’s hit list. Tacked on to Tate’s mission is a sit-down with Villechaise to commemorate the twentieth anniversary of this little guy’s supporting role in the Bond film The Man with the Golden Gun. Neither man’s life is going particularly well. Danny is a recovering alcoholic, his girlfriend Katie (Oona Chaplin) is dumping him, and he has a child that he is not allowed to visit. Hervé has had little steady work since Fantasy Island ended and is living well beyond his means.

During their initial question and answer session Hervé informs Danny that this will be his last interview. As fate would have it, the Q&A runs longer than expected and when Danny arrives late for the Vidal interview, he is summarily dismissed. Hervé suddenly reappears in a pink stretch limo and offers to give Danny his life story before taking off for a night on the town. Delivering a backstory par excellence, Hervé exposes the entirety of his journey from his birth to the present and takes Danny along for what will be a wild ride. The film’s epiphany occurs when Danny makes a final stop at Hervé’s hotel room and realizes that he has just scored an interview for the ages.

This cautionary tale of rags to riches to rags is taken to another level by Dinklage as Dornan becomes the perfect straightman for the over-animated actor. In actuality, this story belongs to writer/director Sacha Gervasi, on whom the Danny Tate character is based. It was Gervasi who conducted the interviews that produced the film’s soul-wrenching story just days before Villechaise committed suicide.

My Dinner with Hervé takes the HBO network back to its biopic roots recalling the style of Behind the Candelabra as we get a very personal, maybe even a bit too personal, view of a character whose relatively short life was, in many respects, larger than life. The casting for this film could hardly be better with superb contributions from Mireille Enos as the long-suffering girlfriend Kathy Self, Andy Garcia as the unctuous Ricardo Montalban, and David Strathairn as enabling agent Marty Rothstein. Confining the basic action to a “one-night stand” places a premium on economy of expression and this is where Gervasi’s script truly excels. Fantasy Island may have been relegated to the elephant burial ground of “classic” television shows but watching the life story of its diminutive sidekick unfold is an unqualified success. Peter Dinklage is one of the best actors working in today’s film and television industry. Highly recommended.