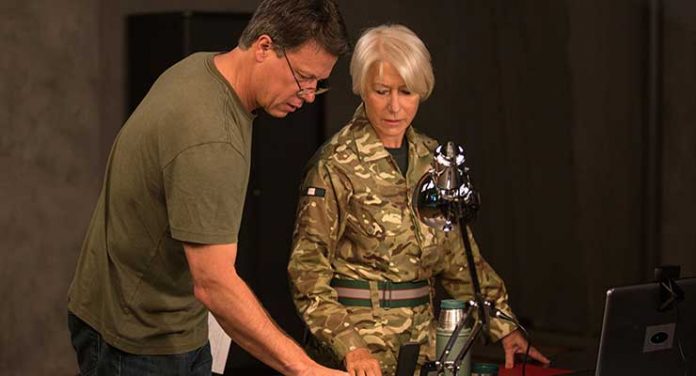 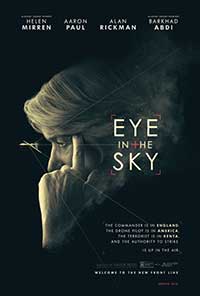 Eye in the Sky takes the notion of drone warfare and expands on what can and cannot be done when leading a remote mission. Colonel Katherine Powell (Helen Mirren) leads the mission to intercept and kill three high value targets in East Africa. She is coordinating with forces in the UK, United States, and on the ground there in Africa. On the ground in Africa she has mobile operatives that have advance drones that are designed to look like a hummingbird and a beetle. For a minute there I thought I was watching something out of a science fiction flick. Colonel Powell’s superior is Lt. General Frank Benson (Alan Rickman) is tasked with facilitating operations with the folks involved in the political component at a different location. He is in touch via computer and phone with Colonel Powell.

As I mentioned – way around the other side of the world, in Nevada, to be exact,

we have drone pilot Steve Watts (Aaron Paul) and his co-pilot Carrie Gershon (Phoebe Fox) – they are in charge of piloting an unmanned drone vehicle containing hell fire armament. What would, on a normal day, make this a routine drone mission and strike is that sitting outside of the complex where the targets are located is a little girl selling bread. With the probability of 100% target kill and 100% collateral damage (the little girl) – the mission is a go from Colonel Powell’s point of view except that sitting next to General Frank Benson are some high-ranking officials from the British government that are against destroying the target if it means collateral losses. That’s the gist of Eye in the Sky.

Drone warfare seems to be the new talking point these days when it come to using it as a tool to gather reconnaissance or to use as a discreet killing machine. Remote pilots halfway around the world sit in guarded top-of-the-line bunkers and operate these angels of death from their private confines. This lets allied forces not have boots on the ground and minimizes risk for all of those involved and reduced collateral damage. Eye in the Sky dramatizes and shares a point a view that an outsider looking in would be hard-pressed to even fathom. Does the life of one little girl matter more than the potential loss of hundreds. It is a morality tale of sorts.

with similar subject called Good Kill. That film dealt more with the strain of being a drone fighter pilot and the how that career did not quite mesh with having a stable home-life. It also dealt with how, as a drone pilot, you do not have a say in anything. You fly, record, and shoot when you are told – and that’s it – rinse and repeat.

Eye in the Sky might aggravate or test the patience of some, but is still a quite intense and compact little thriller featuring a stellar cast of characters. Helen Mirren and Alan Rickman are effortless in their portrayals of these high-ranking officials whose job it is to do things that they don’t like doing. Eye in the Sky depicts just one day in the lives of these folks and when taken as a whole may resonate with the viewing audience – imagine doing that sort of work year round? I cannot even fathom…