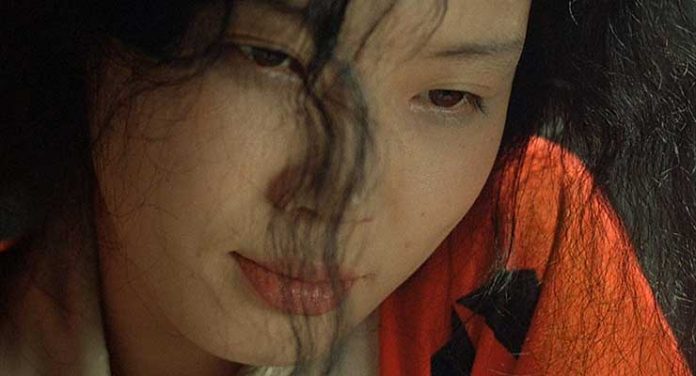 The film In the Realm of the Senses (1976) has to do with Abe Sada, an ex-prostitute who engages in an affair with Ishida Kichizo, who is the master of the hotel where she works and they later get married. During their relationship they experience many different kinds of sexual pleasure.

As far as the script is concerned, I loved the way the whole plot escalates and remains interesting, while at the same time it keeps us wondering about how it will all end. Many occasions make us aware of Sada’s violent thoughts and from the beginning there are many symbols and parts of dialogue that work to forshadow the film’s climax. In my opinion, it is a  well structured film which seems to evolve as the minutes pass and gradually proceed to other levels in a way that does feel forced. If I have a complaint, it is that I wanted to hear a little more dialogue from the protagonists, but at the same time I can understand the emphasis on senses and feelings the title alludes to and as were highlighted throughout the film.

Abe Sada (Matsuda Eiko) is an ex-prostitute, who has a sexual affair with the master of the hotel where she works, eventually becoming his second wife. As days pass, her jealousy over him turns into an absolute obsession, with her demanding him not to sleep with his other wife. Her sexual desire becomes all-consuming, with her not letting him eat or sleep, but only having sex, occasionally crossing the boundaries of the morality of the era, even when there were geishas present. She seems to be driven by many violent instincts that vent through sex and I believe her further downfall towards the end is very much related to her past experiences as a prostitute, maybe some sort of abuse.

Ishida Kichizo (Fuji Tatsuya) is the owner of a hotel, who revels in sexual pleasures, mainly because of the patriarchal values of the era. He is always ready to experience the joy he derives from sex, even if it occasionally makes him feel physically tired. When Sada starts pressuring him or imposing some sexual acts on him that are contrary to what he might normally do, he feels unnerved, still, he succumbs to her wishes. His unfaithfulness diminishes in contrast to his prior marriage and he is always ready to please her even if it means putting his life in danger.

I cannot find a way to describe how amazing Matsuda Eiko was in her performance. From the very start she is giving off  100% of her acting potential, with her acting reaching its top during the film’s last twenty minutes.

Fuji Tatsuya was also great in his role. Although his task was not as demanding as that of Eiko, he lived up to the expectations a viewer can have from him. I also enjoyed the chemistry he had with his co-star.

The majority of the film is set within the walls of a room or farther in the house, with limited scenes being set outdoors. Still, this does not lessen the quality of the film itself. I believe Oshima Nagisa did a very good job at giving emphasis on the right moments, like a rain scene or the ending scene. Music was amazing and it offered the movie a balance to some of the more claustrophobic scenes and other times making them artistic. The cinematography of Ito Hideo under the direction of Oshima was also very interesting, with much importance given to interior decoration, the Japanese aesthetic, traditional costumes and architecture.

While some people might find the end intense or shocking, I also regard it as partly predictable, which does not mean that I view it negatively.