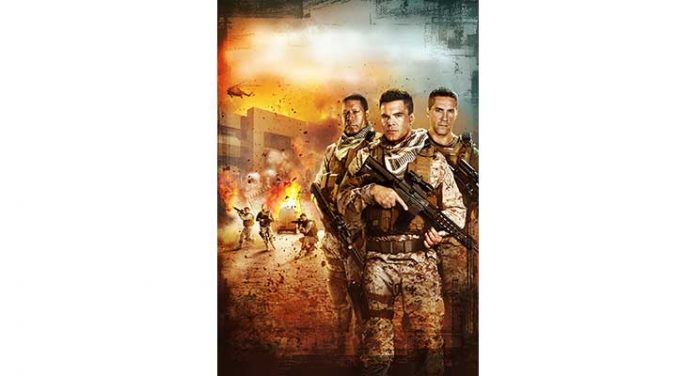 The 2012 attack on the U.S. Embassy in Benghazi, Libya left a lingering cloud over all U.S. diplomatic outposts in the Muslim world. While not an account of actual events, Jarhead 3: The Siege tells a cautionary tale of what could happen again in an outmanned American embassy.

Albright spots a dark-hooded man videoing the embassy and, after some online research, identifies him as known terrorist Khaled Al-Asiri (Hadrian Howard). Bypassing Gunny and Kraus, both major mistakes, Evan goes straight to the Ambassador himself but because he is not “100% certain” of his terrorist identification, his concerns are dismissed. Soon after an informant, Jamal Al-Asiri (Charlie de Melo), is brought into the compound, his brother Khaled and a bunch of militants breach the gates and launch a full-scale assault on the embassy that houses damaging secrets about the American approach to improving local relations.  Seriously outnumbered and hoping that a “safe room” will protect Ambassador Cahill and his staff, the small guard unit waits for Major Lincoln (Dennis Haysbert) and his MARSOC (Marine Corps Forces Special Operations Command)  to fly in. But with the jarheads’ backs against the wall, will the reinforcements arrive in time to save them?

Having seen the two previous installments in this “series,” Jarhead and Jarhead 2: Field of Fire, I knew what to expect in Jarhead 3. Although the situations in each of these three films differ, as do their casts, directors, and locations, they all deliver enough violence and death to satisfy most aficionados of the “war is hell” cinematic genre. JH3 is the shortest of the bunch and, in this case, that is a good thing as it does not quite attain the level of  its predecessors. With a lead actor better known for television than for cinema, Charlie Weber does the best he can with his given cookie-cutter character and the all too familiar bits of battlefield dialogue doled out by writers Chad Law (Close Range) and Michael D. Weiss (Hostel: Part III). Dennis Haysbert (The Color of Freedom) is the most accomplished member of the cast but unfortunately is relegated to cameo role status. Director William Kaufman (Sinners and Saints) is no stranger to ultraviolent films and tries to bring that same vibe to Jarhead 3. However, like many of today’s battle flicks, the seemingly nonstop shooting and escalating body count runs the risk of benumbing even the most war-loving viewers. Fans of Jarhead may still enjoy this one but not at the same level.