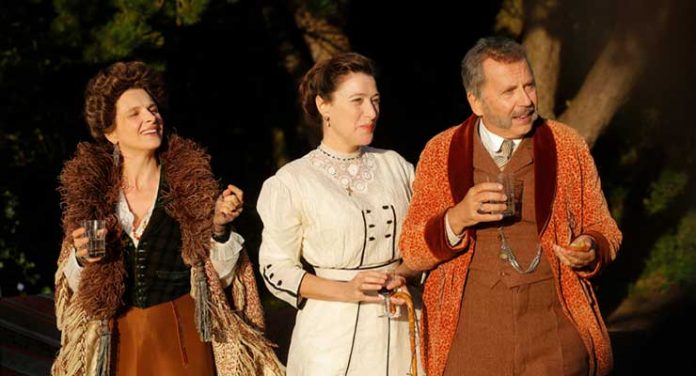 It is summer 1910 on the beaches of the French side of “La Manche” or the English Channel and people seem to be disappearing on a regular basis. Enter bumbling Calais detectives Machin (Didier Després) and Malfoy (Cyril Rigaux), a regular Laurel and Hardy pair in both appearance and demeanor. They quickly conclude that locale of Slack Bay, the confluence of a river and sea at high tide, must have something to do with these mysterious disappearances.

The rather odd Brufort family lives in the village: the mother (Caroline Carbonnier), the father L’Eternel (Thierry Lavieville), and their sons Ma Loute, literally “My Lady,” (Brandon Lavieville), Clo-clo (Noah Noulard), Patte (Julian Teiten), and Tri-Louis (Noa Creton). L’Eternel and Ma Loute carry people across the marsh during low tide and row them across during high tide. But some nasty business is afoot here as we see the Brufort kids nibbling on a human hand while their mother is waving a bloody foot at them. 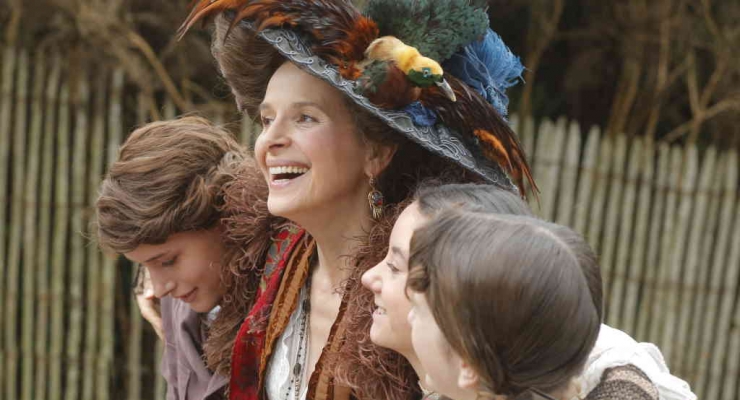 The Van Peteghems’ peaceful summer vacation ends abruptly when eccentric Aunt Aude (Juliette Binoche), André’s sister, comes to pay an extended visit. As we will eventually discover, the emotionally labile Aude raises a dark family secret about Billie’s true, dare I say inbred, parentage. Just as relations between Billie and Ma Loute begin to heat up, they get stranded at sea but fortunately are rescued by the senior Brufort and his crew. Meanwhile, the massively obese detective Malfoy seems to take a tumble about every ten minutes as he and Machin are getting nowhere with their investigation and folks from the region continue to vanish without a trace, including some Van Peteghems.

As a period film, cinematographer Guillaume Desfontaines and costumier Alexandra Charles get everything right,  down to the ruffles on the women’s voluminous skirts. However, there is really a big “however” for this movie, as it has a largely aimless script that mixes in the occasional dash of cannibalism (thankfully given little screen time), the wanton murder of innocent tourists, and the turn-of-the-century class clashes between the bourgeoisie and the peasants. Every time I thought that I knew where Slack Bay was heading, it took off in a different direction, be it sail cars on the beach, airborne detectives, malapropism-burdened priests or random characters that seemed to have either no purpose or one purpose too many. In any case, Francophile filmgoers will leave this one wishing that they received either a larger helping of hors d’oeuvres or plus de desserts. A generally top-flight cast is squandered as writer/director Dumont takes viewers on a literal trip to nowhere and only art-house film junkies would give this one a tumble. Perhaps Slack Bay (a perfect title by the way) will become a “Rocky Horror Show” cult darling but, for now, just skip it.