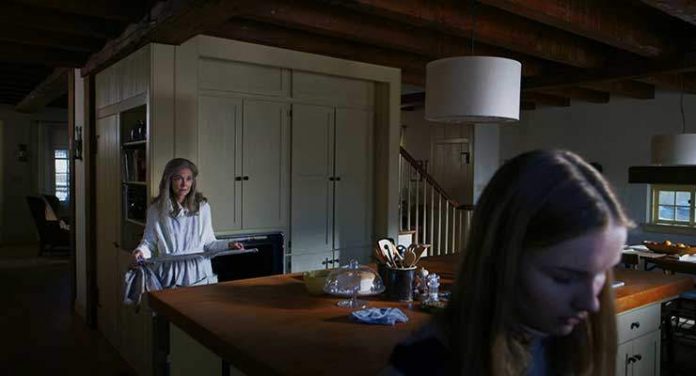 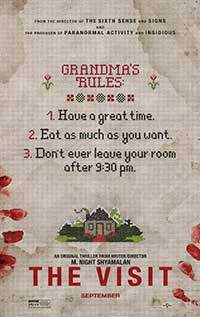 The Visit is a surprisingly low-budget chiller from famed director M. Night Shyamalan (Signs,The Sixth Sense) whose last feature-length film After Earth racked up a 130 million dollar tab. Fortunately for film fans, money is not everything.

Loretta Jamison (Kathryn Hahn) is a single mother, living in Philadelphia with her two young children, 15 year-old daughter Becca (Olivia DeJonghe) and 13 year-old son Tyler (Ed Oxenbould), the offspring of a liaison with an older man (Benjamin Kanes) who left her years ago. Loretta has become estranged from her parents who sadly enough have never seen their grandchildren. Becca is a budding cinematographer and about to film a family “documentary” while Tyler is 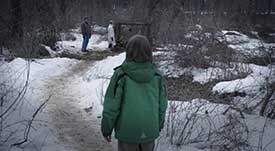 an accomplished little rapper. Miguel (Jorge Cordoba) prepares to take Loretta on a long overdue Caribbean cruise and she sees this as an opportunity for her children to finally visit their grandparents, Maria “Nana” (Deanna Dunagan) and Frederick “Pop Pop” Jamison (Peter McRobbie) on their farm in rural Pennsylvania.

What promises to be a fabulous opportunity for grandparents and their grandchildren to spend a week together may not end that way (after all, folks, this is a horror flick). After Becca and Tyler are dropped off at Grandpa and Grandma’s house, we see some early signs that these two oldsters are possibly a bit off. The Jamisons’ barn 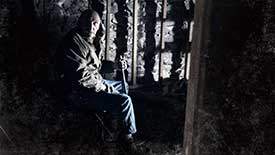 contains a massive pile of diapers with Grandpa’s poop. Grandma gets up at night and walks around aimlessly with her butt exposed. Grandpa attacks a random man whom he accuses of stalking himself and the grand kids. These behavioral aberrations are attributed to senility but the kids discover disconnects between what their grandparents do in their supposed volunteer jobs as counselors at the local rehab center and a very different account from one of their supposed patients Stacey (Cecelia Keenan-Bolger). The grands’ weirdness also emerges during Becca’s efforts to include them in her family video. And it gets more bizarre as Nana reprises the classic oven scene from the Grimm Brothers’ Hansel and Gretel fairytale  and Pop Pop warns the brother and sister about outer space aliens in the neighborhood. The last twenty minutes are a wild ride into the unexpected and most unsettling situations of family films. 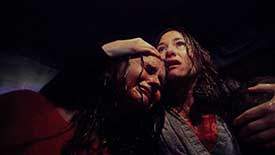 settings as the landscape for his tales of terror. Both young actors, DeJohnge and Oxenbould, portray remarkably precocious children who enter a mondo bizarro while Dunagan and McRobbins are the prototypical elders who seem to yield to the apparent vagaries of old age at every possible opportunity. Shyamalan films usually reframe our perspectives on what we consider to be safe and normal. In this case, everything that we should take for granted is turned on its head. A cautionary tale about losing touch with your parents and, perhaps, a moral that says you should check out who babysits your kids, this film will shock and disturb viewers for at least its hour and a half running time, and even after the end credits are finished.