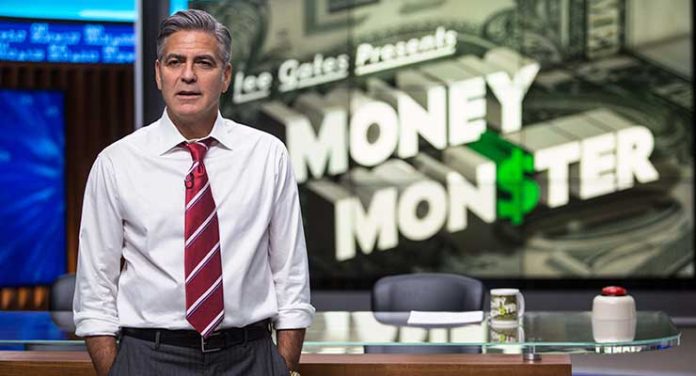 Wall Street has provided considerable subject material for a number of excellent films over the past few decades, ranging from the iconic Wall Street (“Greed is good”) to the recent Wolf of Wall Street (“Everyone wants to get rich, am I crazy?”). While millions of Americans have continued to invest in the stock and bond markets, there has always been a public moth-to-flame attraction for the behind-the-scenes  procedurals that determine the flow of funds.

Lee Gates (George Clooney, Up in the Air) is an egotistical host of a popular financial television program Money Monster that gives its viewers advice on investing. After Gates recently recommended that viewers trust the financial firm IBIS Clear Capital with their money, a huge number of investors jumped on board. On the day before the current broadcast, IBIS’s value has dropped precipitously, attributed by corporate spokespersons to a “glitch” in the computer trading algorithm, and set back its investors to the tune of eight hundred million dollars!

In an honest effort to find out what really went wrong with this company, Gates plans to interview IBIS CEO Walt Camby (Dominic West, The Wire). The show’s veteran director Patty Fenn (Julia Roberts, Erin Brockovich) tells Lee that Camby is in Geneva so his place will be taken by the firm’s chief communications officer Diane Lester (Caitriona Balfe, Now You See Me). Minutes before the interview is to take place, Kyle Budwell (Jack O’Connell, Unbroken), a disgruntled IBIS investor bursts into the studio and, armed with a handgun, he takes Gates hostage and straps him into a bomb-laden vest to which he alone holds the trigger. We find out that, along with many other investors,  Budwell’s life savings of $60K has been wiped out in the downdraft of the IBIS collapse. He is not only very angry but, instead of wanting his money back, Kyle demands that the firm provide a public explanation about how this financial collapse could have happened. 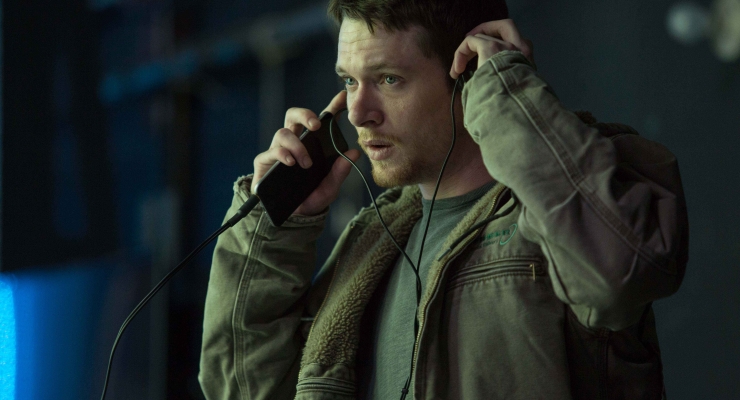 The hostage taking begins to play out on live television as Gates tries to bargain for his life, while cameraman Lenny (Lenny Venito, War of the Worlds) continues to capture all the drama for a viewing public that grows exponentially every minute. What emerge are  confessionals from the two men that expose their personal foibles including Gates’ many marriages and Budwell’s abandoned pregnant girlfriend. The NYPD, led by Captain Powell (Giancarlo Esposito, Breaking Bad), begins to carry out a risky and very unconventional  hostage extraction plan for Lee that depends on precise timing and some lucky breaks.  Suddenly, everything spirals out of control and the Money Monster’s hostage episode is taken to the streets of  Manhattan with an audience of countless gawkers who seem oblivious to the real hazards of being so close to a man who is wearing a bomb jacket.

Underscoring the general public’s current distrust and dislike of Wall Street in general and of large investment groups in specific, Money Monster exposes the dark side of this business world, and does so in a very personal way.  Director Jodie Foster (The Beaver) provides perfect pacing of a very taut and suspenseful script by Jamie Linden (Dear John), Alan DiFiore (The Bridge), and Jim Kouf (National Treasure). Money Monster is blessed with an extremely strong cast from top to bottom with leads Clooney, Roberts and O’Connell delivering excellent turns in their respective roles. The cinematography provided by Matthew Libatique’s crew (Straight Outta Compton)  maintains the film’s dramatic real-time tension. Chalk this one up as another worthy addition to the now well-established Hollywood tradition of skewering the one-percenters who play with our hard-earned dollars. Money Monster was released in theaters in May 2016 and is now available on several VOD sources, including Amazon Video, iTunes, and VUDU.