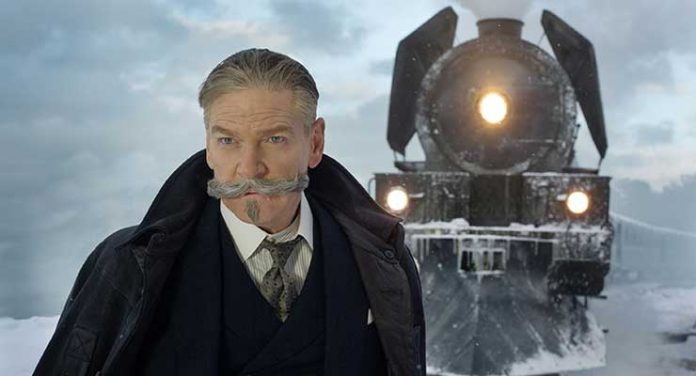 On the surface, It would seem impossible to top the star power of Sidney Lumet’s 1974 film adaptation of Agatha Christie’s Murder on the Orient Express featuring Albert Finney, Lauren Bacall, Ingrid Bergman, Sean Connery, John Gielgud, Anthony Perkins, and Vanessa Redgrave, among others. However, as most of these roles were extended cameos this 2017 remake, produced, directed and starring Oscar-winner Kenneth Branagh offers up a roster of filmdom’s current A-listers, so no casting apologies are needed.

Murder on the Orient Express opens in 1930s Jerusalem as Poirot (Branagh) solves the theft of a rare religious artifact and then prepares for a much-needed holiday. He literally runs into old friend Bouc (Tom Bateman), director of the Orient Express, who books the detective a passage to France on his train so Poirot can reach London in time to take on another urgent case.

Once on board, we meet a motley crew of a dozen characters that figure in this suspense-ridden thriller. Sleazy American art dealer Samuel Ratchett (Johnny Depp), having received numerous threats from clients whom he has bilked, offers Poirot a bodyguard job that the Belgian summarily declines. After an avalanche conveniently derails the train, Ratchett’s butler Edward Masterman (Derek Jacobi) discovers his employer’s dead body, covered in knife wounds. A list of suspects emerges headed by Dr. Arbuthnot (Leslie Odom, Jr.) and car salesman Biniamino Marquez (Manuel Garci-Rulfo) whose dark complexions would make them persons of interest to the Yugoslavian police when the train reaches Český Brod.

The late Ratchett turns to be not only a crook but he was actually John Cassetti who amassed his original fortune from the ransom that he received during the kidnapping-murder of young Daisy Armstrong. Daisy’s parents were the socially prominent British Colonel John Armstrong (Phil Dunster), a WW I flying ace, and his American wife Sonia (Miranda Raison) both of whom met tragic ends. The methodical Poirot interrogates the remaining passengers as he races to reveal the murderer before the Orient Express continues on its route. The detective’s investigation focuses on wealthy (and over sexed) American widow Mrs. Caroline Hubbard (Michelle Pfeiffer), Ratchett’s edgy assistant Hector MacQueen (Josh Gad), modest medical missionary Pilar Estravados (Penelope Cruz), egotistical Austrian scientist Gerhard Hardman (Willem Dafoe), demure English governess Mary Debenham (Daisy Ridley), barbiturate-dependent Hungarian Countess Elena Andrenyi (Lucy Boynton), and snooty Princess Dragomiroff (Dame Judi Dench). After some failed leads, Detective Poirot begins to connect the dots and, risking his own life, attempts to solve the most baffling case of his long and distinguished career. 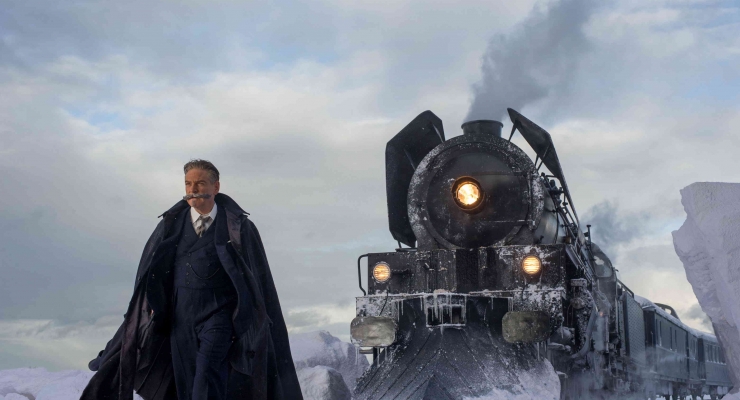 With all the baggage packed into this film’s first version, it is to the credit of director Branagh and writer Michael Green that they make this reboot their very own motion picture. Staying true to Agatha Christie’s original intent, this creative team projects a claustrophobic world in which a vicious killer lurks. One of my major issues with the original film was Finney’s portrayal of Poirot as an ultra-fussy, priggish, and self-parodying Belgian detective with an awful fake French accent. Branagh’s take on this character is darker but far better realized as he becomes a world-weary hero with a wistful backstory involving “Katherine,” a sweetheart from a distant time and place.

This new production has numerous CGI effects, effectively recreating a train’s treacherous traversal through hazardous snow-covered mountain terrain. Cinematographer Haris Zambarloukos’s cameras also take advantage of four decades of film technology when it comes to details and color palette as the 4K digital intermediate of a 70 mm source literally pops out of the screen. Composer Patrick Doyle has worked previously with Branagh and contributes a nice score, if not nearly the equal of the earlier one penned by Richard Rodney Bennett.

Remakes of classic films always run the risk of suffering by comparison with their predecessors. After rewatching the original Murder on the Orient Express, I felt that Branagh and company take this slow-burning chestnut and succeed in making it enjoyable for 21st century audiences. Highly recommended.