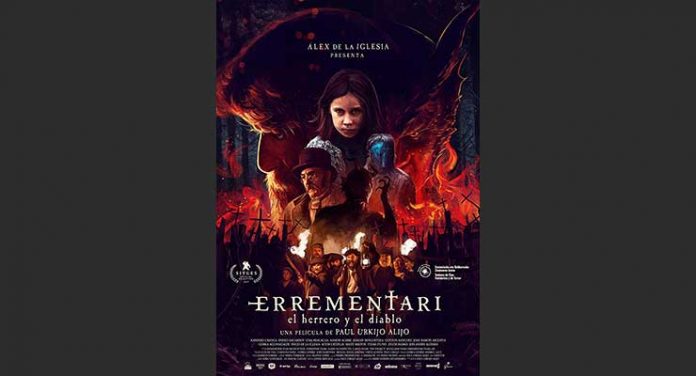 It’s a bit of treat when one stumbles upon something they were not expecting. I was watching something on Netflix when all of a sudden, I got some random selection that said if I liked this film then try this one, which ended up being Errementari: The Blacksmith and the Devil. Say that three times fast!

The film is based on a Basque folktale involving a reclusive blacksmith named Patxi (Kandido Uranga), who has captured a demon. He spends his days and nights fortifying himself from this evil along with torturing the demon. Unbeknownst to the Blacksmith, Usue (Uma Bracaglia), a young orphan girl has escaped from the nearby orphanage and made it onto his property. Once the townsfolk, Catholic Church, and government Ministry get wind that Patxi might have bitten off more than he can chew – they will converge at his hideaway for the ultimate battle of good versus evil.

I had to embellish that last part. It’s nowhere near as hokey as it sounds. Errementari is presented in Basque with English subtitles and features a Basque cast and crew. It’s as if Guillermo del Toro created a dark (another one) fairy tale in the Basque language and tradition. The exception being that Alex de la Iglesia (The Last Circus) produced this feature for writer/director Paul Urkijo Alijo.

The story and concept for Errementari is straightforward. You have the brawny blacksmith serving as an anti-hero of sorts, because even though he is fighting evil, his place is booby-trapped and several people do die at the hands of his bloody traps. Usue is sort of a tragic character in that she misses her mother, who died by suicide, and the Catholic Church does nothing in terms of trying to comfort her of this since in the eyes of the church – suicide condemns you to hell. Usue gets to imagine her mother burning hell for all eternity. All of this makes for great fodder for the demon in captivity who is most definitely taking notes and taunting all of those who come near it.

Speaking of demons, Errementari has some great creature special make-up effects. The film does not rely on CGI until we get to the last few minutes of the show. There is some humor but that’s usually left to some of the bumbling town-folk and the demon itself. One thing I really did appreciate was that the film is grounded in folklore. There are rules set in place for certain characters. One of the funniest gags in the film involves the counting of individual chickpeas. That might not sound like much but in terms of context is quite hilarious.

Errementari: The Blacksmith and the Devil is a thrilling and dark fairy tale romp that is sure to please Brother’s Grimm, Guillermo del Toro, and Basque culture fans alike. I like that Netflix has taken more gambles in acquiring world films like this. Here’s hoping that they continue to expand this universe that has been set up nicely in this film for future installments. Errementari: The Blacksmith and the Devil is recommended!

Errementari: The Blacksmith and the Devil is currently streaming on Netflix