Netflix Original In the Shadow of the Moon (Movie Review) 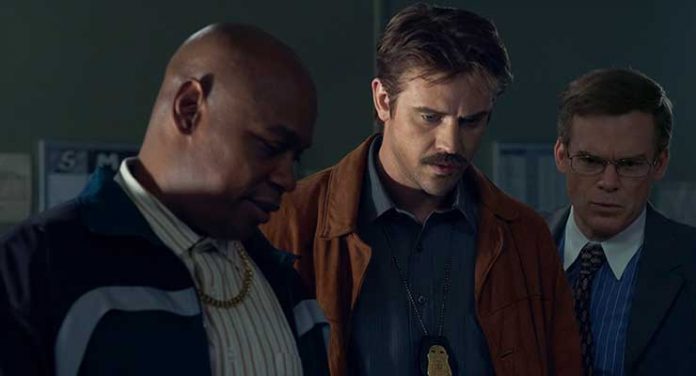 An attention-getting opening for In the Shadow of the Moon shows a view of 2024 Philadelphia where there appears to have been an apocalyptic event. Flashback to 1988 Philly and a classical pianist, a short-order cook, and a bus driver all have sudden fatal cerebral hemorrhages. Detective Thomas Lockhart (Boyd Holbrook) and his partner Maddox (Bokeem Woodbine) visit the scene of the crash caused by the dead bus driver and subsequently investigate the other murder scenes. Detective Holt (Michael C. Hall), Lockhart’s brother-in-law, sees this case as a potential career booster as each victim bears similar puncture wounds to the neck that suggests a serial killer is at work.

A dogged Lockhart confronts the hoodie-wearing suspect Rya (Cleopatra Coleman) who resurfaces in each cycle of murders that recurs every nine years coinciding with a phase of the moon. The secret to these cases may be held by the scientist Dr. Naveen Rao (Rudi Dharmalingam) who might have perfected the art of time travel. As time passes, Lockhart has become a rather dissolute private eye and is obsessed with solving these serial killings. He has become estranged from his daughter Amy (Sarah Dugdale) who has moved in with her uncle Holt who believes that Lockhart has absolutely lost his mind. Perhaps, there is a method to the madness of these murders and perhaps Rya may hold the key to averting a catastrophic civil war. 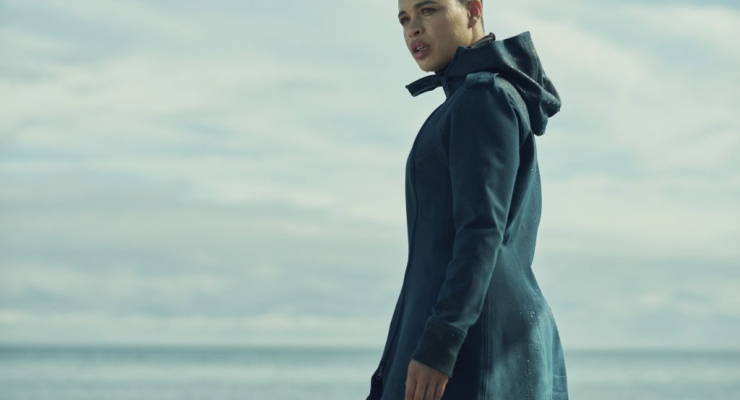 Cleopatra Coleman in In the Shadow of the Moon (2019). Photo Credit: SABRINA LANTOS
6 Photos

The trope of time travel that retroactively changes the course of history has been used more times than it is probably healthy for me to remember.  Cautionary time-travel films like The Butterfly Effect or 12 Monkeys have shown us how skillful writers and directors can tell a tale that is both entertaining and consistent with their original sci-fi concepts. In the Shadow of the Moon has none of these virtues and squanders its two-hour run with awkward segues, time-shifts, and plot devices that keep us guessing only because they evolve so slowly.  It takes little time to figure out that the “immortal” Rya is from another dimension of time or that her principal objective is to do in people whose offspring might cause the internecine warfare of the future. Tying all of the loose ends together in In the Shadow of the Moon happens far too late for director Jim Mickle to bail out the lame script crafted by Gregory Weidmann and Geoff Tock. While the lead actors Holden and Hall are veterans of small screen crime dramas, even they cannot overcome the thankless roles that they are handed. Better skip this one until a worthy successor to H.G. Wells arrives on the scene.