Once Upon a Time in Hollywood (Movie Review) 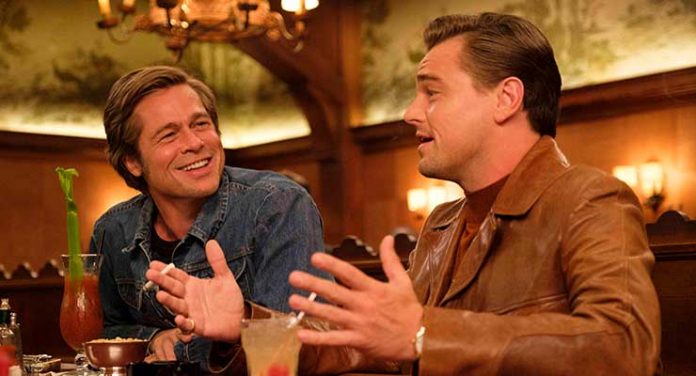 Once Upon a Time in Hollywood stars Leonardo DiCaprio, Brad Pitt, and Margot Robbie just to name a few – there are many more familiar faces spread throughout the 161-minute running time. Rick Daulton (DiCaprio) is a popular actor whose career may be winding down, because the majority of his roles are limited to playing the “heavy.” Cliff Booth (Pitt) is Daulton’s faithful stuntman and best friend. He’s loyal to him above all else. Sharon Tate (Robbie) is the beautiful starlet who is destined for tragedy.

To try and describe Once Upon a Time in Hollywood would be an exercise in futility. Not because it’s difficult but because of spoilers and the fact the film is unique as hell. It’s linear, with minimal flashbacks, but is a fable above all else. It’s like Tarantino’s head was split open and out poured this sort of “stream of consciousness” onto celluloid.

We, as viewers, are taken on a rambunctious tour of 1969 Hollywood and Los Angeles. We see actors on the verge becoming has-beens along with hippies at every corner. Everyone lives in the moment – partying, drinking, smoking, and just living it up. We’re flies on the wall, as we travel with these beautiful people. We get to see how the other half lives and it’s a pretty cool life, for the most part.

I’ve watched the film twice already and have loved it even more the second time just for the fact that it plays out like a fable. I think I even teared up a bit at the end due to how Tarantino chose to frame Sharon Tate. The way he frames Robbie as Tate – he’s not only in love with her as a human, but he’s protective of her. We know her fate in real life, which is tragic, but here in the film, she’s been frozen in time and no harm will ever come to her. Robbie portrays her as sweet, innocent, and just lovely all around. I would fairly compare Once Upon a Time in Hollywood to that of Inglourious Basterds. There are several liberties taken with certain characters that made me see what was going on. I approve of those choices, which really hit home in the end. Brad Pitt and Leonardo DiCaprio are in their career-best mode here. 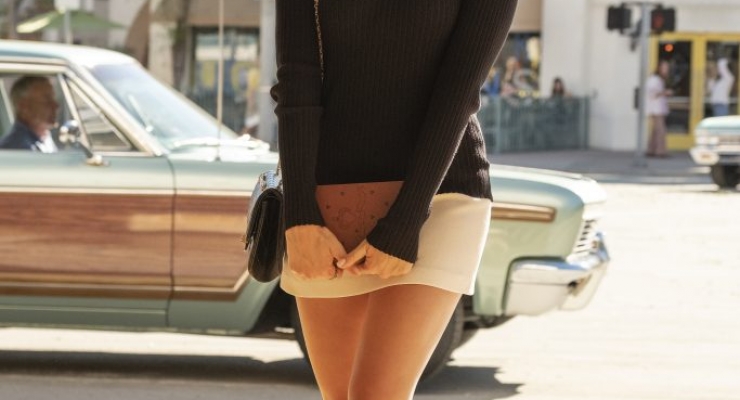 Margot Robbie stars in ONCE UPON TIME IN HOLLYWOOD
25 Photos

You know it’s an event year when the latest Quentin Tarantino film debuts in cinemas. It’s a big event due to having the film being shown in multiple formats. We have 70mm, 35mm, and digital presentations. It’s an event unto itself! What I also like, and just like Hateful Eight, Tarantino imbues Once Upon a Time in Hollywood with many homages from several films. I noticed flourishes from Texas Chainsaw Massacre, Psycho, and Blade Runner. Yes, you read that right, I said Blade Runner. You may have to wrack your brain for that one, but you can spot it if you pay attention.

This is a long film but time flies and with a really cool soundtrack, you’re in good hands. I may go watch it a third time. I would suggest that you read as little as you can about it. Whatever format you choose to watch it in, have a tasty beverage and enjoy the ride. Please stay for the mid-credit sequence. It’s insanely funny!

4.5 / 5 TheaterByte Rating
{{ reviewsOverall }} / 5 Users (0 votes)
Bona Film Group | Heyday Films | Sony Pictures Entertainment (SPE) | Visiona RomanticaStudios & Distributors
R (for language throughout, some strong graphic violence, drug use, and sexual references)Rating Certificate
UK | USA | ChinaCountry
EnglishLanguage
161 Mins.Run Time
1.33:1 (some scenes) | 1.85:1 (some scenes) | 2.39:1Aspect Ratio
Quentin TarantinoDirector
Quentin TarantinoWriter
26 July 2019Release Date
The Film
Summary
A has-been actor and his stunt double try to make it big in the waning days of Hollywood's Golden Age during 1969. The film stars Leonardo DiCaprio, Brad Pitt, and Margot Robbie. If Quentin Tarantino were to retire right this second, Once Upon A Time in Hollywood would be a great picture to go out on. It hits all the right notes. It makes me wish that these were the 1960's due to how sexy it all seemed. Very highly recommended!
What people say... Login to rate
Order by: