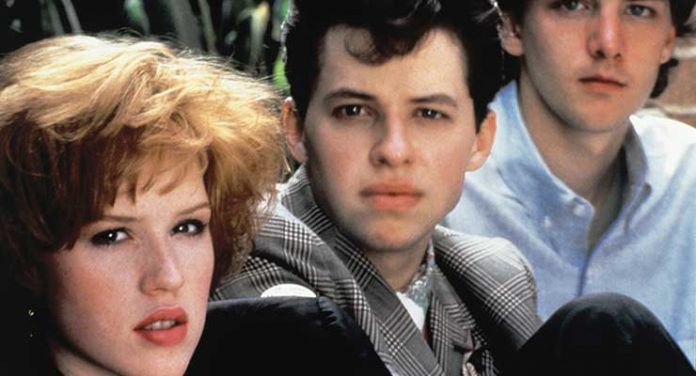 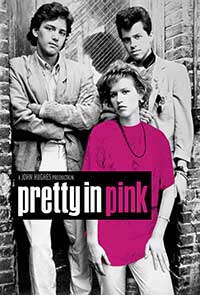 Yes, it has been 30 years since the John Hughes penned Pretty in Pink graced us with its theatrical bow. This was also to be Molly Ringwald’s last collaboration with John Hughes (note: Howard Deutch directed Pretty in Pink, however). Ringwald stars as Andie, an insecure high school student who is revving up for the prom. She has several insecurities and those are of her being “poor” and not popular. Her father played by Harry Dean Stanton is out of work and seems to be in a perpetual rut. Her only friend is that of Duckie (Jon Cryer) – an eccentric guy who pretty much wears out his welcome as soon as he hits his first. Duckie is basically Andie’s confidant and she tells him everything including how much she wishes she was rich, drove a hot car, went to all the cool parties, and to find a rich guy to take her to prom. You know, all the things Duckie and her family are not – dream big, girl. Ahem.

Along the way in school, amidst the bullying by the popular girls, she turns down Steff (James Spader) and his friend Blaine (Andrew McCarthy) picks up the pieces of that failed encounter. Keep in mind that Blaine had already made visual contact with Andie since he frequented Andie’s work at the record shop and later on at the library. Me thinks Blaine is a wee-bit stalker-ish. Andie likes it. What she also likes is that Blaine isn’t a jerk like all the other rich boys and, in fact, is rich himself! Double and triple score, yo! Blaine’s only issue(s) is that he’s a bit of flake and does care about his status in life. His parents won’t think to highly of him if he decides to take someone like Andie to the prom. Decisions, decisions.

If you noticed my sarcasm in the above then you’ll see that I did not care for Pretty in Pink at all. It’s superficial at its core and highly improbable. I was literally shaking my head at disbelief when the ending came around. Duckie is such a loser – no wonder Andie only liked him as a friend – he did not have the guts to tell Andie how he felt – not that it would have matter to Andie, though. I’m all for female empowerment but when a character like Andie, and she is shallow as all hell, does not really “get” the point by the end – then I don’t feel bad for the consequences. Yeah, she may have settled a few accounts — her home life — but it seems like Duckie was the one to get the shaft in the end, most of it by his own doing though.

I am not going to get up on my soapbox and say that there’s something wrong with you if you like Pretty in Pink — honestly, I had never seen it before, and Weird Science is one of my favorite comedies of all time as far as John Hughes movies go, so what do I know? What I did like were the cameos by Dweezil Zappa and Andrew Dice Clay. There are some funny lines sprinkled in here and there and oh, how cute is Annie Potts? Little bursts of light like that is what the film should have had more of. Anytime Duckie and Andie were onscreen I was reminded of Jon Favreau’s character in Swingers and how he could not get over his ex-girlfriend. Although this was worse, because Duckie was stuck in the friend zone — there was no ex-anything. To the men reading this review: DON’T BE LIKE DUCKIE.

In any event, there’s my rant. Pretty in Pink has been released in high-definition via digital download. The image looks great for a 30-year-old movie and the cheesy ’80s modern rock soundtrack is quite wonderful. Take note of the unusual shifting aspect ratios; the film was shot with 1.85:1 in mind but during the opening credits it looked like it was in 1.37:1. In fact, if you visit the IMDb page it lists an aspect ratio of 1.37:1. I’m able to confirm it was slightly 1.37:1 before it filled up the entire screen after the beginning. If you’re a John Hughes completist and want Pretty in Pink in high-definition then this Digital HD version will be right up your alley.