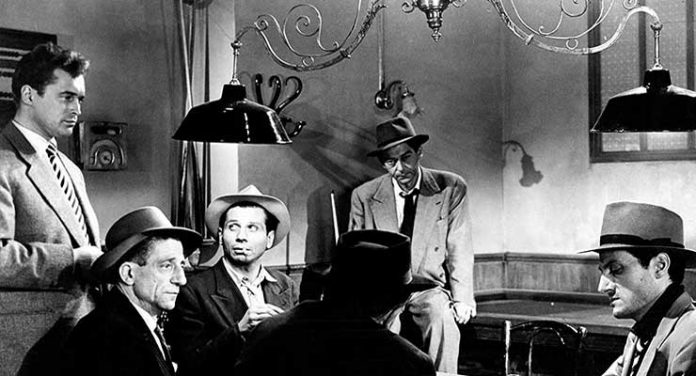 Rififi revolves around four guys who conspire to commit the perfect jewel heist. We see their preparations as they plan the  heist, the heist itself and how the carelessness of the one destroyed everything they gained.

In the beginning it is a little difficult to understand that the protagonists have a criminal past and that is mainly due to Jo’s parenthood and their general appearance. But as time passes their criminal tendencies become much more clear, especially as far Tony is concerned. It was very interesting watching Tony, Jo, Marco and Cesar planning and trying to organize themselves, and the scene of the heist makes the viewer very anxious about what is going to happen. I believe the after- robbery events are fascinating as well, because we notice how easy is for a person to become engulfed with avarice and make mistakes. Generally, I would not say I had any complaint with the plotline, since it was a clever concept. Τhe whole fight with Grutter was very sophisticated and presented without extraneous violence, while the ones when Tony tried to save Jo’s son were full of suspense.

In my opinion, the acting was good. All the actors put in strong performances except Carl Moehner and Claude Sylvain, both of whom could have been a bit better. I felt they did not give one-hundred-percent of their skills.

In terms of direction the film was great. Jules Dassin never failed to disappoint and did not allow Rififi to drag or bore. The scene of the robbery is slow-paced and tense, exactly how we would imagine and expect it to be in reality, maybe even a hyper-reality version. Also the last five minutes with the almost insane driving were shocking and unnerving, but in a well made manner. What I liked most was, in the heist scene, when we constantly see the close-ups to the protagonists faces that seem to be full of sweat, making us feel even more anxious about whether they will get away with it all or not.

The best cinematographic moment was Viviane’s singing moment in Grutter’s club with all the silhouettes and shadows. We also have the chance to observe many shops, buildings or bridges around some central parts of Paris.

I am very pleased with the ending, since everyone got what they deserved. The child fortunately gets back home safe and sound with Tony’s help, who ends up dying in the car. I am happy that the ending was not with him being the one who gets and spends the money, because he was the only one who did not express himself on how he would use it. He was a loner and he did not deserve to gain all the money that the other three needed more. The only thing I missed from the ending was a final scene focusing on the bag with money next to dead Tony.

Rififi was originally released in U.S. theaters on June 5, 1956