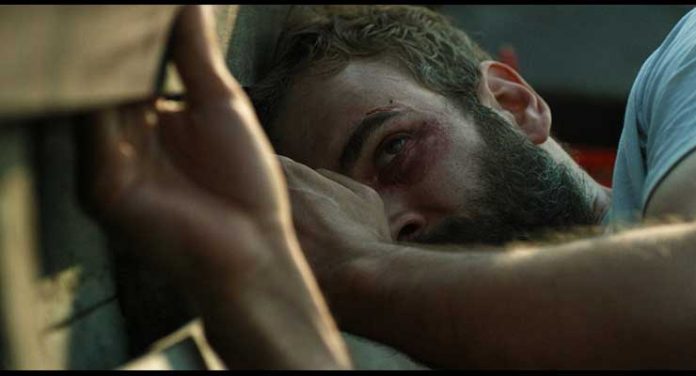 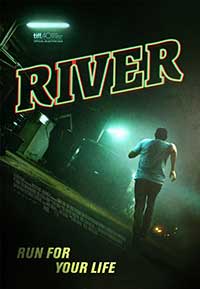 What could be worse than being trapped in a foreign country, pursued by the police for a murder that you don’t remember committing, and having no exit strategy? Apparently not much, if we can take Jamie M. Dagg’s recently released River as an object lesson in how trying to be a Good Samaritan can get you into serious trouble.

Young American volunteer doctor, John Lake (Rossif Sutherland) is working hard to save lives in a remote Laotian village hospital. Medical director, Dr. Stephanie Novella (Sara Botsford), sees that Lake is getting burned out, and recommends that the good doctor should get some down time. Dr. Lake arrives at the Mekong river town of Don Khon, and, after knocking back a few brews at the local tavern, he spots a pair of Aussies Simon (David Soncin) and Lachlan (Aidan Gillett) trying to liquor up two local women. Some unspecified time later, a less-than-sober Lake returns to his hotel room with a bruised and bloodied face. As the doctor struggles to remember the evening’s earlier events, he recalls getting punched by Lachlan who was raping one of the women from the bar, Nang (Amphaiphun Phommapunya). Dr. Lake then goes postal and beats the Aussie into a stupor. The next day, Lachlan’s corpse washes up on the riverbank and Lake becomes the prime suspect in his death. A highly suspenseful cat-and-mouse game between Lake and the Laotian authorities now shifts into high gear.

With the plot’s high-velocity twists and turns, we see Dr. Lake using all methods of conveyance, boats, buses, cars, and even his own two feet to elude the dogged pursuit of the police. As if things could not get any worse, Lake finds that the United States Embassy may be unable to prevent his arrest and possible imprisonment. But things do get even worse for Dr. Lake when the dead man was identified as the son of a prominent Australian politician. Douangmany (Douangmany Soliphanh), a man whose son Lake had saved, takes him to the best spot to cross the broad expanse of the Mekong River and escape into Thailand.

Filmed on location in Laos and Thailand, River is a raw, often chilling account of one man’s struggle against all the odds to avoid prison in a far distant country. First-time director Dagg received the Canadian Cinema Academy’s Claude Jutra Award intended specifically for rookie filmmakers. As noted by Martin Katz, the Academy’s chair, “Jamie M. Dagg’s command of the complex moral story and landscape in River surpasses what we normally see from debutant directors.” Lead actor Rossif Sutherland is a son of the doyen of Canadian actors, Donald Sutherland. The younger Sutherland turns in a tour de force performance, capturing the shifting emotions of an obviously dedicated and principled healer caught up in an unprecedented situation not of his own making. While I expected something more like Midnight Express, River, when compared to the earlier film’s abject brutality, is a dexterous handling of troubling societal issues that still exist in many countries. River can currently be seen on various streaming and VOD outlets.