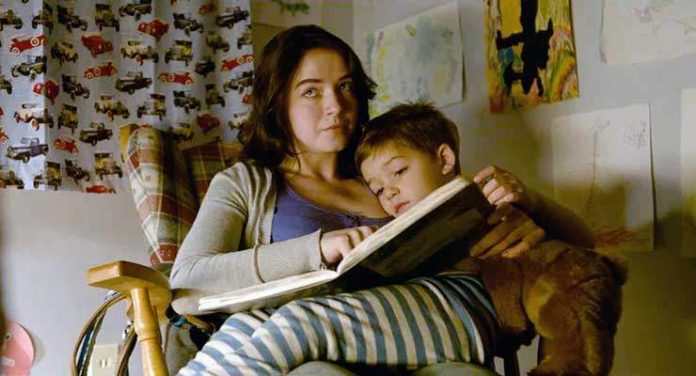 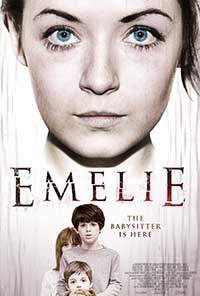 A 2015 indie film that had rather limited screenings, Emelie is a babysitter-gone-bad drama and the feature film debut of director Michael Thelin,  better known for his music videos with such artists as Bruno Mars, Cee Lo Green, and Blake Shelton.

Dan Thompson (Chris Beetem) and his wife Joyce (Susan Pourfar) are about to dine out on their thirteenth wedding anniversary. Their three children, ranging in ages from eleven to four, are oldest son Jacob “Jake” (Joshua Rush), daughter Sally (Carly Adams), and little Christopher (Thomas Bair). Before the film even

gets going, Anna Coleman (Randi Langdon) who is filling in for regular babysitter Maggie (Elizabeth Jayne), gets garroted and tossed into the back of a black town car.

When Dan picks up Emelie (Sarah Bolger) who is sitting on the steps of what we presume is her home, she successfully passes herself off as “Anna” the substitute sitter. After the Thompsons have driven off, Emelie initiates the children into some very unusual “games.” Initially, this baby-faced babysitter appears bent on letting the kids to do all sorts of things that their parents would have forbidden, like tear up couch cushions.  As Emelie starts taking the kids’ pictures, ominous background music foreshadows some dark and scary moments that lie ahead. Sexual tension is stirred up when Emelie seductively gets Jake to open one of his mother’s tampons for her while she is sitting on the toilet. This prepubescent lad (“with a pretty interesting browsing history,” according to his dad) starts to suspect that something is amiss with the sitter. Emelie rifles through Mrs. Thompson’s personal effects and later, makes the children watch Jake’s pet python devour Sally’s pet mouse.

There are periodic cutaways to the parents’ romantic dinner, as matters in the Thompson household go from bad to worse. Emelie finds a secret sex tape of  Dan and Joyce and forces the kids to watch it with her. Jake sneaks off and, when he surreptitiously dumps out Emelie’s purse, he uncovers her real identity. Now suspicious of Emelie’s every move, Jake starts to believe that he and his siblings may be in imminent danger. Pieces of Emelie’s past are revealed with the help of her twisted diary as is her real motive for insinuating herself into this happy home. The plot’s pace quickens considerably and what began as a seemingly innocent evening soon becomes a very deadly one. There are plenty of sudden shocking moments that will jolt viewers and keep them off balance for much of the film’s second half.

A movie that was well received at a number of film festivals, including Tribeca and Deauville, Emelie is a very commendable first feature effort for writer/director Thelin who collaborated on this very dark story with Richard Raymond Harry Herbeck (Cloverfield, The Cabin in the Woods). The atmospheric camera work by Luca del Puppo (The House that Jack Built), taking pages out of the Hitchcock cinematic playbook, creates suspense out of ordinary household objects like a dripping faucet or a dangling mobile. Phil Mossman (We Are What We Are) wrote a  creepy score that effectively supports the dramatic moments (and there are plenty of them) in this taut little thriller diller. The real standout of this film is the lead actor Sarah Bolger who turns in a startling rendition of a scary and clearly unhinged young woman with  facial expressions that mirror her character’s inner darkness.

Emelie is currently available on various digital platforms and on Blu-ray and DVD.