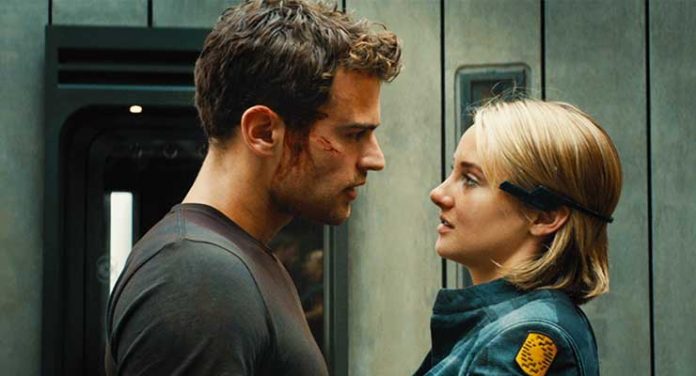 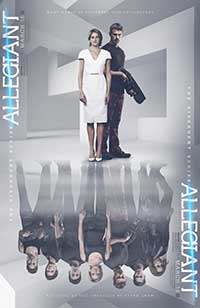 The young people from the Divergent series have returned in the second-to-the-last installment called Allegiant. Assuming readers have already watched the previous two installments — Allegiant starts off with Evelyn (Naomi Watts) being the new ruler of Chicago — and certainly the timeless adage of “the more things change, the more they stay the same” describe her new way of ruling. In taking over from Jeanine, Evelyn has now become the new dictator of Chicago. In doing so she has begun rounding up Jeanine’s supporters and troops and having them executed by firing squad. Of course, the executions aren’t as blatant as they seem, because no one dies unless the “people” call for it. The people seem to call for lots of death.

This puts Tris (Shailene Woodley) and Four (Theo James) in a predicament and they realize they and their band of friends cannot stay in Chicago that much longer and make for the wall. Over the wall, there’s a wasteland known as the “Fringe.” As Tris and company make a run for it they are quickly intercepted by troops that operate from

Chicago’s O’Hare International Airport. The man overseeing this glitzy new enclave is David (Jeff Daniels). David and his group of followers make claims that they have been keeping tabs on Tris since birth. David and company have technological advances that make that sort of thing possible. They have the technology to create invisible barrier walls and invisible remote operated pods that can infiltrate different sites and within different factions. That’s the edge David has and why he knows so much about Tris and her crew.

Having seen the previous installments and thinking they were elementary at best – what Allegiant has is terrific new production design along with some cool new futuristic weaponry, vehicles, and architecture. What it does have in spades is pretty bland acting from all of those involved. I don’t really know what Jeff Daniels is doing here but I guess he has to eat, too. Tris seems to have not learned her lesson from the previous two films and is still gullible and continuously has that fish out of water look to her. Four is still rough around the edges but has awesome gunsmith skills and Peter is continues to be a smug jerk only in it for himself. What this movie needed was more Jai Courtney. Yes, I said it.

The visual effects were all top-notch but even as a “style over substance” film I could not like it all that much. The studios have decided to split this final installment of Veronica Roth’s Divergent series into two films to try and

capitalize on the market. The final installment has been changed to Ascendant, which now, has no choice but to be released in 2017. Judging by this past weekend’s opening box office results – few will care.

I have not read the books, but I gather those would have more depth than the

films, because no way does a future this bleak and somewhat hopeless have this many good-looking people in it. People are constantly being exposed to acid rain that looks like blood and all they need is a rinse and they’re back to looking hot again. That’s a future I’d like to live in.

Snide remarks aside, if you’ve already invested your time and money into the film series you might as well get to the end. Granted, Allegiant is only part 1 to end. Part 2 hits theaters next year.

The Divergent Series: Allegiant (TheaterByte Movie Review)
2 / 5 TheaterByte Rating
{{ reviewsOverall }} / 5 Users (0 votes)
Summit Entertainment/LionsgateStudios & Distributors
PG-13 (for intense violence and action, thematic elements, and some partial nudity)Rating Certificate
USACountry
EnglishLanguage
121 MIns.Run Time
2.35:1Aspect Ratio
Robert SchwentkeDirector
Noah Oppenheim, Adam Cooper, Bill CollageWriter
18 March 2016Release Date
The Film
Summary
Allegiant obviously feels incomplete and one must definitely know going in that the film has been cut in half. We have one more chapter left to go. As far as Allegiant goes -- the story is rather dull, but there are lots of, cool shiny things to look at.
What people say... Login to rate
Order by: