Under ordinary circumstances, a couple who have just had their first child should be enjoying one of the life’s most joyous experiences. In the film business, all that changed in 1968 when Roman Polanski’s horror classic Rosemary’s Baby hit the big screen, opening the doors for subsequent movies in which a newborn can touch off a series of sinister events.

Something is Stephen Portland’s feature-length horror film debut and is set innocently enough in a typical upscale suburban community.  A young husband (Michael Gazin) and his wife (Jane Rowen) are trying hard to adjust to the recent addition of a baby boy to their household. Dad has a demanding career in advertising that will require his ending his family leave in a few days and travel to make important new product presentation. Mom does not want him to leave her, as she is constantly exhausted, frequently weepy and forgetful, and possibly on the verge of a nervous breakdown.  It is also quite clear that the new parents’ support system is virtually nonexistent as the nearest set of grandparents lives more than five hours away.

The couple finally decides to move their son’s crib into the nursery so that they can both get a much-needed good night’s sleep. A baby monitoring system unwittingly starts to change the storyline from domestic drama to horror show when the wife thinks she sees a black-robed intruder on the system’s video camera. Her husband finds no one there and dismisses this event as a technical glitch.  When the baby carriage gets inexplicably moved outdoors, he sees this same menacing character and goes after it only to have his wife find him lying bruised and unconscious on the floor.  The police are called and when the officers (Joel Clark Ackerman and Evan Carter) arrive, they find nothing unusual, writing off the couple’s agitation to sleep deprivation.  Writer/director Portland now steps up the suspense with plot twists that blur the boundaries between reality and imagination, as Something moves toward an unexpected and tragic conclusion. 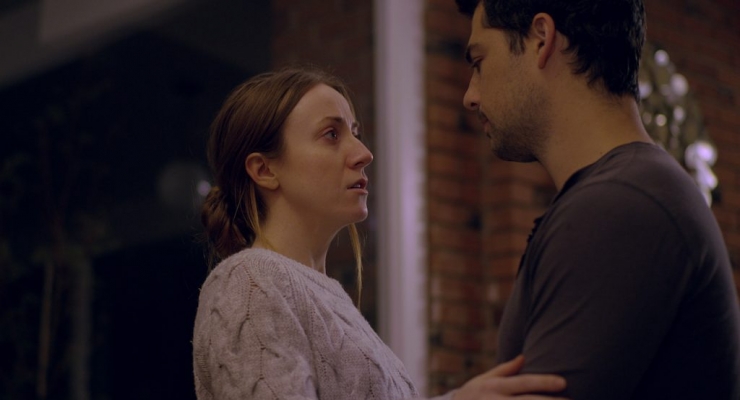 Michael Gazin and Jane Rowen in Something (2018)
6 Photos

Essentially a two-character, single-set film, Something gets driven by Michael Gazin’s (My Crazy Ex) and Jane Rowen’s (Dark Corridors) quite credible portrayals of struggling new parents. Audience members who have had their own children can readily identify with these two characters and that is what will bring this storyline so dangerously close to home. Are these folks hallucinating or is there really a malevolent individual that means to do the family harm? The dramatic ploy of having the intruder not seen simultaneously by both parents would suggest the former while the attack on the husband supports the latter. In either case, this is what makes Something a compelling watch that will keep viewers on edge until the end credits.  Eric Roberts makes a brief  cameo performance that, in the interest of spoiler-prevention, will receive no further comment. An effective first effort by its creator Stephen Portland that has already garnered a number of film festival awards and one that will surely put him on the radar of the film-going public. Highly recommended.

Something will have limited theatrical release in Los Angeles and New York on March 1, 2019 and On Demand everywhere beginning March 5, 2019

Something: Official Trailer from Subspin Productions on Vimeo.

3.5 / 5 TheaterByte Rating
{{ reviewsOverall }} / 5 Users (0 votes)
Subspin ProductionsStudios & Distributors
USACountry
EnglishLanguage
86 Mins.Run Time
2.40:1Aspect Ratio
Stephen PortlandDirector
Stephen PortlandWriter
1 Mar. 2019Release Date
The Film
Summary
An auspicious feature-length film debut by Stephen Portland that thrusts a family with a newborn child into a threatening domestic situation that may or may not be a series of hallucinations.
What people say... Login to rate
Order by: