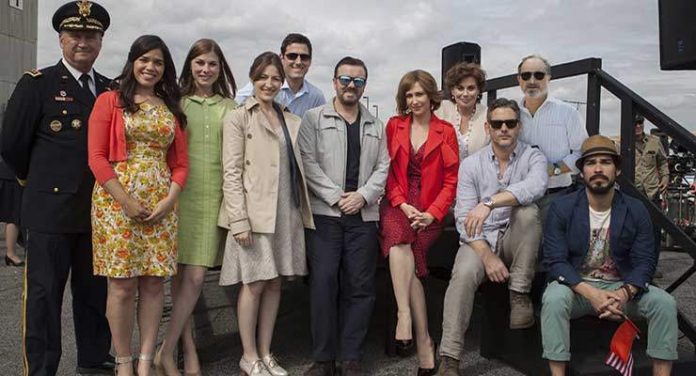 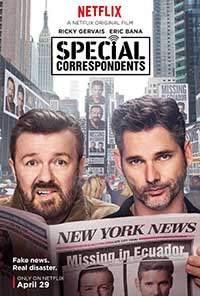 Frank Bonneville (Eric Bana) is an arrogant, egocentric radio reporter for New York’s low end Q365News station. With assistant Claire Maddox (Kelly Macdonald) in tow, Frank pretends to be a detective and inveigles his way into a hotel murder scene. After being outed by a real NPYD detective,  Frank and his sound technician Ian Finch (Ricky Gervais) still manage to report the story way ahead of the other NYC radio stations. Station boss Geoffrey Mallard (Kevin Pollak) tells Frank that any such future stunts will get him fired. Dumpy Ian and his very attractive wife Eleanor (Vera Farmiga) are attending a black-tie event when Mallard interjects himself into their evening and tells his soundman to leave immediately for a breaking news story that may take all night. An unattended Eleanor gets approached by Frank (unaware that she is Ian’s wife), 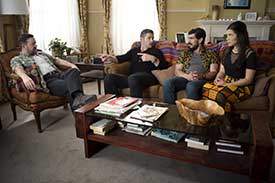 and one thing leads to another as the couple  enjoys a quickie in Eleanor and Ian’s  apartment.

The following day, Mallard tells Frank to cover a supposed rebel uprising in Ecuador and to take Ian with him. But there is a major snag. Eleanor has now left Ian who, thinking that he was discarding an envelope with a long letter to his wife, mistakenly pitches the envelope that contains the Ecuador airline tickets and both of their American passports. Now in a quandary, Ian and Frank visit Ian’s friends, Brigida (America Ferrara) and Domingo (Raul Castillo) who run a restaurant across the street from the radio station. Ian comes up with a great idea: they will “broadcast” from an empty room above the restaurant using Ian’s professional sound effects while Brigida and Domingo will deliver authentic background Spanish dialogue. 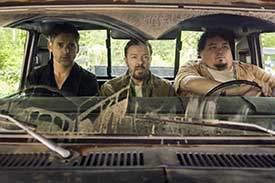 Ian and Frank start sending regular reports from the “frontlines” and the demand for their stories skyrockets. As the pair find themselves in a media duel with TV reporter John Baker (Benjamin Bratt), they feel compelled to create continually new and more hazardous situations. The massive publicity that the news flashes garner encourage Eleanor to set up a “Heroes” fund-raising scheme complete with orange logo teeshirts and original songs as the money starts rolling in. Matters escalate when the duo’s rumor about the so-called mastermind behind the Ecuadorean crisis, “Emilio Santiago Alvarez,” reaches the US State Department and Secretary of State (Mimi Kuzyk). The two men,  now believed to be in imminent danger,  are urged to reach the US Embassy in Quito so that they can return home at once. Of course this is impossible, so Frank and Ian must cook up a phony hostage situation for themselves, a move that spectacularly backfires and kicks the rest of the story into high gear.

In the tradition of fake war propaganda films like Wag the Dog and zany odd couple road movies like The Road to Hong Kong (by the way, both are far better cinematic efforts),  Special Correspondents is a comedic roller coaster ride that ultimately disappoints. The chemistry between comedian/writer/director Gervais (The Office) and 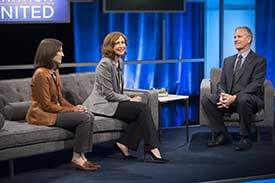 straight man Bana (The Hulk) seems on-again-off-again as both must contend with Gervais’ frequently awkward script. Subtlety has never been a Gervais trademark and, with humor that rarely rises above the “frat boy” level, this film becomes one that is mostly for fans of the diminutive Englishman. More’s the pity as Vera Farmiga turns in a truly funny, hyperbolic depiction of the not-so-long-suffering wife while the talented Kelly Macdonald provides the perfectly understated foil as Ian Finch’s love-at-a-distance colleague.  Special Correspondents was screened in April 2016 at the Tribeca Film Festival and may be currently viewed exclusively on Netflix.