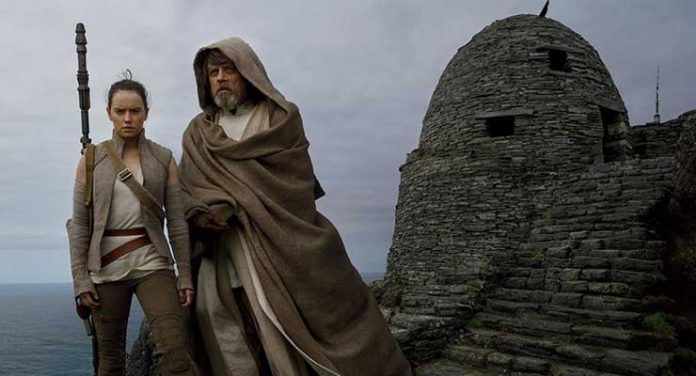 Star Wars: The Last Jedi  is here, the second in the new star wars trilogy that began with The Force Awakens. It has been forty years since George Lucas’ Star Wars franchise first graced the big screen, its traditional written introduction unfolding against a star-studded background. Whether you are like myself an original trilogy aficionado or a new-millennium devotee of the sequels, there is something unique about the blend of young and old characters, the wide variety of creatures and robots, and the sheer backdrop of other galaxies that is intoxicating and quasi-addictive. Star Wars: The Last Jedi resumes the narrative of Episode VII: The Force Awakens that found the Resistance, led by General Leia Organa (Carrie Fisher) trying to rally her supporters to overcome the First Order. Poe Dameron (Oscar Isaac) leads an attack against a First Order dreadnought that destroys nearly all of his space fleet. Kylo Ren (Adam Driver), the son of Leia and Han Solo, becomes a major protagonist in this saga as he allows his mother’s spaceship to escape another attack but not before Leia is incapacitated during the battle.

Vice Admiral Holdo (Laura Dern) assumes command of the spacecraft while Poe, Finn (John Boyega) and Rose Tico (Kelly Marie Tran) take an alternative course to undo the Resistance’s reversals of fortune. Rey (Daisy Ridley) has found her way on the Millennium Falcon to Ahch-To with her co-pilot Chewbacca (Joonas Suotamo). There they find an aging Luke Skywalker (Mark Hamill) and begin the process of preparing Rey to become a Jedi who will acquire “The Force.” Through virtual travel, Rey becomes acquainted with Kylo and believes that she can win him over from his current fealty to the evil Snoke (Andy Serkis), the leader of the First Order. 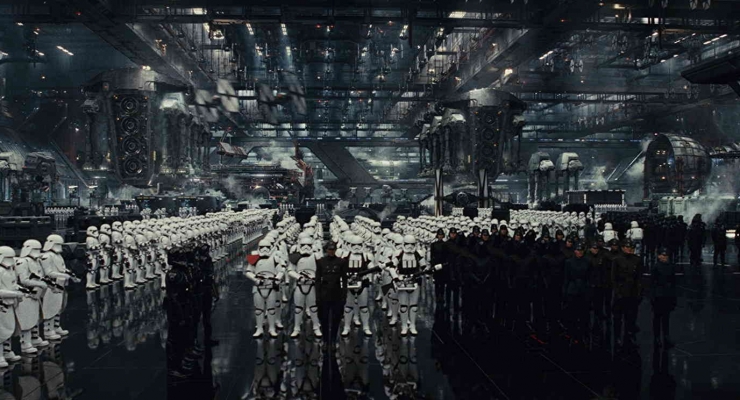 After a series of disasters, the few remaining Resistance cargo vessels are en route to a deserted planet in the hopes that they will live to fight another day. Ultimately, there is the no-holds barred confrontation between the First Order and the Resistance, complete with light saber duels, that may determine who will have final control of the galaxy.

Young writer/director Rian Johnson appears to have done his homework as he powers the rather long (2 hours, 32 minutes) Star Wars: The Last Jedi through a very deliberate beginning to a roller-coaster conclusion, successfully maintaining “the force” for its audiences. As in its predecessors, Johnson also delivers a script that is peppered with just enough lighthearted humor and homages to the film’s predecessors, e.g., the Casino scene, to offset the intrinsic darkness of the storyline.

Shot mostly on 35 mm and 65 mm film, the 4K digital intermediate delivers stunning visuals, particularly in the facial close-ups captured by the cameras of cinematographer Steve Yedlin. The special effects and make-up crews number in the hundreds and create both the creatures that we have come expect and love, the fantastic prostheses worn by many of the cast, and the sweeping landscapes of the other-worldly settings that lend requisite credibility to the events on the screen. An immersive Dolby Atmos sound track, bolstered by John Williams’s majestic score, puts viewers in the middle of the action with overflights, bomb blasts, and other usual suspect audio effects.

Along with Wonder Woman and Atomic Blonde, 2017 has been the year of strong female protagonists and I am told that the Disney studios are already planning a third installment in this new trilogy for 2019 with the same writer/director and some of the same cast members. This is great holiday season news for franchise fans that cannot seem to get enough of these epic space operas.