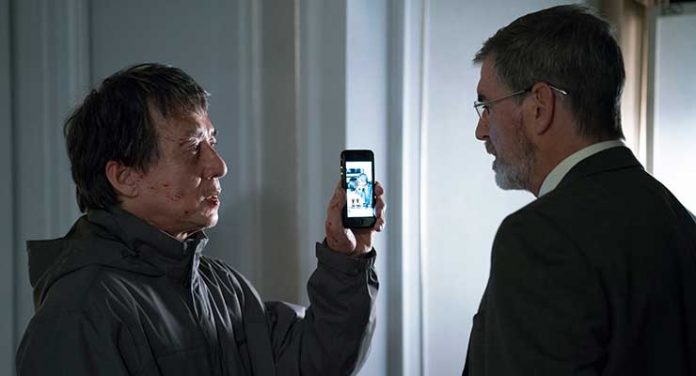 Revenge has occasionally been described as a “dish best served cold,” but its temperature in The Foreigner has been turned way up. Ngoc Minh Quan (Jackie Chan) is a 60-year-old naturalized British citizen and former Viet Nam war special operative who owns and operates a Chinese restaurant in a modest London neighborhood. As the film opens, Quan’s only surviving child, daughter Fan (Katie Leung) is killed in an apparent IRA-style bombing of a trendy boutique, and he launches a personal vendetta that drives the film forward. The original Irish Republican Army had fragmented during the 1990s peace process, making the emergence of this film’s supposed splinter group, the “Authentic IRA,” an even more credible plot device.

Quan’s initial efforts to get Scotland Yard Inspector Bromley (Ray Fearon) to give him the names of the suspected terrorists fail, so he travels to Belfast and, after many attempts, finally gets to talk to Liam Hennessy (Pierce Brosnan), a former IRA leader and now an Irish Deputy Minister. Once again, Quan is stymied, but he suspects that Hennessy may know much more than he lets on. The old man starts spying on the Deputy Minister and snaps a photo of Liam locking lips with his mistress Maggie (Charlie Murray) who is really Sara McKay, a terrorist, and, with Hennessy’s wife Mary (Orla Brady), is playing the Deputy Minister.

Hennessy is pressured by British politician Katherine Davies (Lia Williams) to find those responsible for the terror attack and he tries to negotiate a deal that, if successful, will result in the release of his imprisoned IRA buddies. Quan has now traced Hennessy to a country estate and starts a relentless campaign against him by bombing his property, and disabling a number of his bodyguards. In response, Hennessy sends for his nephew, Iraq war special ops veteran Sean Morrison (Rory Fleck Byrne), to track down and eliminate Quan. A second fatal bombing, this time on a crowded London bus, increases the urgency for Hennessy to get positive results and he engages his old IRA associate Hugh McGrath to help him unmask the bombers. 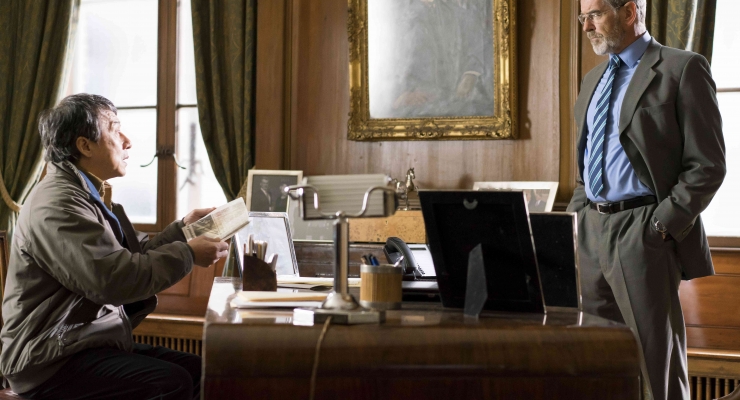 The Foreigner is a classic cat-and-mouse game, and the suspense builds as the London police race against time to prevent another bombing. Director Martin Campbell (Casino Royale) is no stranger to the action film genre and keeps the tension mounting throughout while allowing sufficient time to develop insights into his two principal characters. The many fans of Jackie Chan movies expect the cheeky over-the-top action that this superstar delivers, and, in his typically laconic manner, he delivers some of this although, due to his obvious age, also absorbs more punishment than usual and is far from cheeky. This film does provide Chan with a more human side than usual by adding his tragic and touching family backstory. His character’s initial humility before the British and Irish authorities is gradually discarded, and Chan becomes a convincingly relentless stalker. Irishman Pierce Brosnan completely inhabits the complex, conflicted ex-IRA member turned politician, who may or may not be complicit in the London bombings, and who maintains an uneasy relationship with his grudge-bearing wife who believes that he could have prevented her brother’s death. His character’s seemingly perpetual state of rage comes across as the one overcooked element in David Marconi’s otherwise excellently prepared adaptation of Stephen Leather’s novel, The Chinaman.

The location shots by David Tattersall’s camera crew draw viewers into a powerful action thriller that will glue them to the edges of their seats and provide two hours of damn the torpedoes, full speed ahead entertainment. Complementing the picture is a Dolby Atmos soundtrack* that episodically stuns the audience with detonating bombs and maintains the edginess of veteran composer Cliff Martinez’s soundtrack. The Foreigner makes a strong case for the two AARP-eligible male actors who continue to captivate younger audiences and let them in on the principle of fine wines—some vintages definitely get better with age. Highly recommended.