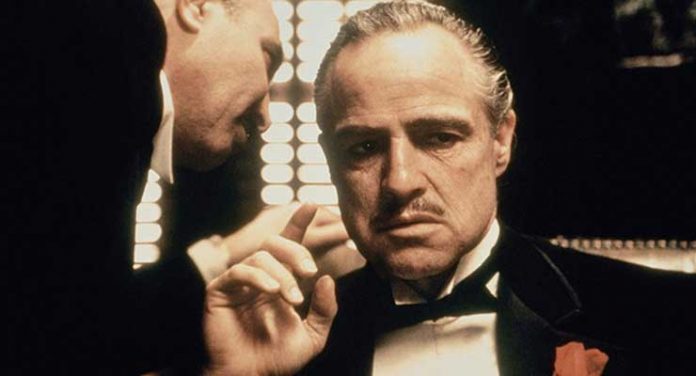 Francis Ford Coppola’s The Godfather has to do with the life of the Italian mafia family leader Don Vito Corleone (Marlon Brando) and the slow ascent of his non-mafia son Michael (Al Pacino) to eventual, reluctant head of the family amidst a war between the varying crime families.

The film focuses on the life of Corleone family and especially Don Vito Corleone (Brando), who is the leader of the Italian mafia that rules the region of Brooklyn, New York. After his refusal to support the other four Italian families’ plan of selling drugs, his life is endangered and a new vendetta by his elder son Sonny (James Caan) begins. Meanwhile, the other Corleone son, Michael (Pacino), who was against the family’s way of living and was living a conventional life away from corruption, going to university, and trying to date a normal, protestent anglo girl (Diane Keaton) uninvolved in the world of organized crime, is back for the sake of his father’s honor when another crime family tries to kill Vito.

In my opinion, one of the most interesting details was the presence of the religious mysteries throughout the movie. First and foremost the film begins with its setting being the marriage of Don Corleano’s daughter Connie (Talia Shire) and later we see another member of the family getting married, while there is also a funeral and a baptism towards the end.

The film is overwhelming in a sense that during the three hours many events happen that make you feel like you have binged an entire season of a series in one day, but it remains appealing till the end, even for viewers who might feel that the genre is not their style and that is exactly because the script is so well written and structured.

Generally performances were exceptional with Marlon Brando’s acting being iconic in every sense. The role of the patriarch of this mafia family was tailored to him. At the start I was not really sure why everyone was enthusiastic with Al Pacino, but as I saw a change in the character he played, the internal battles during his transformation and the results, I have to admit he was amazing in the role of Michael. The rest of the cast did a very good job as well, like James Caan and Lenny Montana (as Luca Brasi). I also enjoyed Al Pacino’s and Simonetta Stefanelli’s (as Apollonia) chemistry.

In terms of direction it was carefully done by Francis Ford Coppola who did a great work, in the sense that he managed to convey the unnerving feeling of living in a mafia family. My favorite moment is when Michael is about to take one of the most important decisions about the family’s future and he is tortured by fear and uneasiness for some seconds, with sound direction playing an important role.

Cinematography took a lot of the costume design of the era and the aesthetic of some religious ceremonies into consideration. Lighting during meetings among mafia members is mostly dim and many scenes are dark with brown and other earth tones being the prevalent color.

The end feels like a circle to me and that is mostly because the film ends in a similar way it started; there is a big change as far as the wedding of the beginning of the movie is concerned and towards the end there is the mystery of baptism with a new godfather, signifying a new era, as if we were back to square one.

The Godfather was originally released to theaters 24 March 1972 (USA)