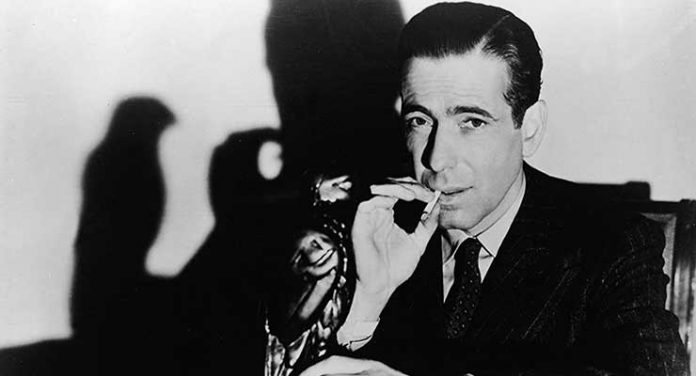 A note from the editor: In this new series from TheaterByte we invite our readers to join our new contributing writer Marialena as she discovers the world of classic films. Please enjoy this inaugural review from her of 1941’s The Maltese Falcon In this 1941 classic directed by John Huston, private detective Sam Spade (Humphrey Bogart) takes on a case to find a priceless artifact that inveigles him with a duplicitous femme fatale, the police, and two shady gangsters.

The Maltese Falcon belongs to the film-noir category and is an adaptation of Dashiell Hammett’s novel. In my opinion one of the reasons why this film is worth watching is because of its twists. Once the viewer thinks (s)he has an understanding of what is going on or starts predicting what is following, (s)he is proved wrong. The story has a depth and it is not surprising for someone to feel confused at some points, since the murders are connected with a falcon that has an ancient history. The plotline is well structured and the fictional characters are well written, while I would say that the film is very quotable. My only complaint is that I felt like in the first 60 minutes everything was a little slow going on.

One of the characteristics of Humphrey Bogart’s character, the private detective Sam Spade is his unpredictability. For sure he is a character whose actions are unpredictable and thoughts difficult to ascertain. He is a witty one and that can be said from the way he uses words when he tries to convince the police about his innocence while unraveling the mystery by himself. The most obvious example are his negotiation skills while bargaining over the falcon. He is organized, but he also appears to be driven by love and passion.

For me, the character played by Mary Astor, Brigid O’Shaughnessy, is one of the most irritating characters in the film. She is beyond just unpredictable as Spade tends to be. At the beginning the viewer might sympathize with her, but later we start to realize that she is a completely different person from what we think of her. You can never take any word from her seriously and that is because she is constantly lying and acts like she is the victim when in fact she is manipulative or “dangerous” as they call a woman.

Bogart’s acting was excellent. Although Sydney Greenstreet, who plays Kasper Gutman, the man who hires Spade to find the falcon, is great, Bogart does not seem to be overshadowed by his colleague’s performance. Both of them are amazing and contributed quite a lot and help raise the level of the The Maltese Falcon. Lorre and Patrick did a nice job as well, the one as a potential buyer of the falcon and the latter as Spade’s secretary. To my disappointment, I cannot say the same for Mary Astor. I think there is something wrong with her selection for playing Brigid O’Shaugnessy. I believe she was unconvincing as a femme fatale and I found her acting awkward and full of pretense. I have watched other film noirs with the same sort of “secretive woman” character and I was amazed, so I know surely that my opinion about her acting has nothing to do with the character itself.

The direction from John Huston is exactly what someone can expect from a film of its kind. The tension of Spade and the situation in general was well supported from it. Although I think Huston did a good job, I was just not that drawn in and that is because I have high standards (Hitchcock).

Well, despite this being a film-noir, which is noted for is cinematography, The Maltese Falcon it is a movie in which the last detail someone may pay attention to is cinematography. The reason being (s)he is totally focused on solving the mystery. But without doubt I did enjoy the visuals of the place where Archer’s murder happened. I liked the location and I think it would have been better if this scene had lasted a little longer so as to be able to see more of this ominous setting.

The Maltese Falcon was originally released October 18, 1941, was directed by John Huston and stars Humphrey Bogart and Mary Astor.