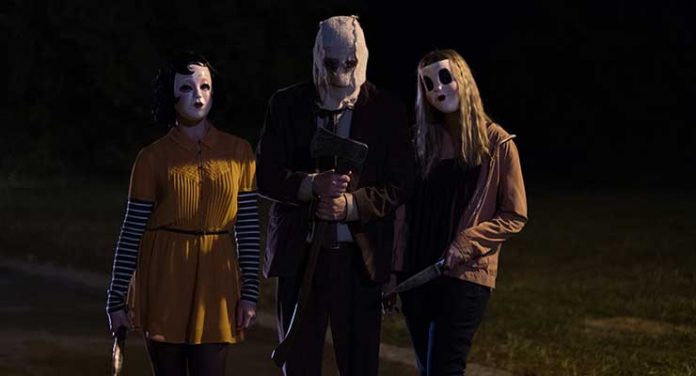 A sequel that I was looking forward to years ago finally made its theatrical debut recently in The Strangers: Prey at Night. The original film was a self-contained thriller focusing on a couple of protagonists and a couple of antagonists. It was a relatively small production that cleaned up in the box-office. After almost ten years in some sort of development, Bryan Bertino’s original film has now gotten a sequel.

The Strangers: Prey at Night picks up at an undisclosed time frame after the first film’s conclusion. The “strangers” basically take over a secluded trailer park. Our main protagonists are a family of four. Cindy (Christina Hendricks), Mike (Martin Henderson) and their children Luke (Lewis Pullman) and Kinsey (Bailee Madison). They’re off to the trailer park since it’s owned and operated by Cindy’s family. They’re in transit to ship of Kinsey to a boarding school due to her disciplinary problems. What they don’t know is that the masked killers have taken over the park and that they will surely be next on the chopping block.

When the first Strangers’ film was released way back in 2008 it made a major dent in the box-office totals. It was a minimal film supposedly based on real events and may have been an “unofficial” remake of the French thriller Ils (Them). The first film made a ton of money and was a genuinely disturbing film. Director Bryan Bertino made a splash and seemed like he would be a force to be reckoned with in the horror film world. Fast forward things ten years and that did not necessarily come to pass. A sequel was announced shortly after the release of the first one but nothing ever came of it until now. The Strangers: Prey at Night was co-written by Bertino but directing duties fell to Johannes Roberts (47 Meters Down). 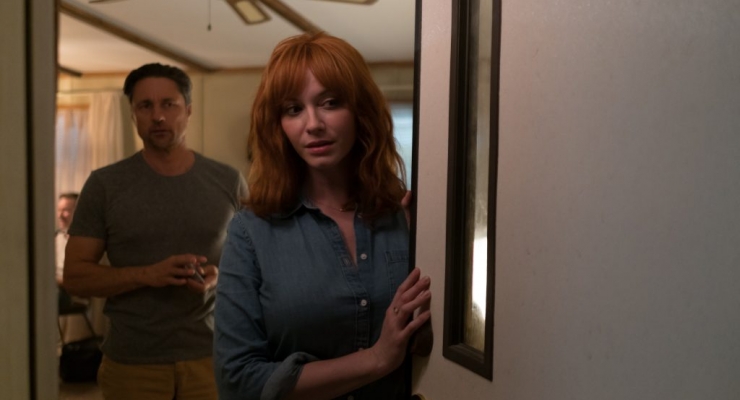 While spending the night in an abandoned trailer park, Cindy (Christina Hendricks) and Mike (Martin Henderson) are greeted by an unwelcome stranger in THE STRANGERS: PREY AT NIGHT. Photo credit: Brian Douglas / Aviron Pictures
14 Photos

The first film relied on stillness and self-contained scares while this sequel is much more open and feature a few more victims. Prey at Night wears its horror influences on its sleeve most notably that of John Carpenter. Wait until the final act – it turns into a lovely homage to the master of horror. Prey at Night also has some synth and typical 80’s flourishes, especially with regards to the music choices used.

I have no idea why The Strangers: Prey at Night took so long to get released but am glad that we got something. The sequel was an entertaining romp of a film that more than solidifies itself in the mythology of the franchise. I appreciate the final product and think Johannes Roberts did a bang up job. The film runs a brisk 85-minutes, so you will be in and out in no time. For those that want to take the journey and relive the first film – Scream Factory have recently released a remastered version of both cuts of the first film that include brand-new special features. This new sequel was released independently, so all we can do is hope that it gets a stellar Blu-ray release. As far as its theatrical exhibition goes – The Strangers: Prey at Night gets an enthusiastic recommendation!

3.5 / 5 TheaterByte Rating
{{ reviewsOverall }} / 5 Users (0 votes)
Aviron Pictures | Fyzz Facility | White Comet | Bloom | Rogue PicturesStudios & Distributors
R (for horror violence and terror throughout, and for language)Rating Certificate
USACountry
EnglishLanguage
85 Mins.Run Time
2.35:1Aspect Ratio
Johannes RobertsDirector
Bryan Bertino | Ben KetaiWriter
9 Mar. 2018Release Date
The Film
Summary
In this sequel to the 2008 horror film The Strangers, a family of four spending the night at an isolated mobile home park are stalked by a group of masked killers. I still don't know why it took ten years for a sequel but as far as sequels go The Strangers: Prey at Night does a good job in keeping the franchise alive. Recommended.
What people say... Login to rate
Order by: