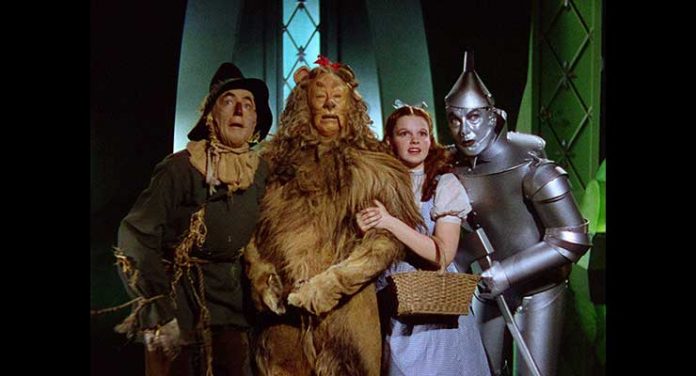 The Wizard of Oz revolves around a girl named Dorothy who, after a tornado hits her farm in Kansas, wakes up in a magical world named Oz and we see her trying to find her way back home as she finds a group of friends, the Cowardly Lions, the Tin Man, and the Scarecrow, each searching for aid from the powerful Wizard of Oz.

The plot is well structured and tailored to kids, who will find interesting all the mysterious, magical creatures in that utopian world or they may sympathize with Dorothy. Also it is obvious the music element in this movie. Many times feelings or dialogues are expressed through songs, which appear to be one of the basic characteristics of the film. This means that if you love musicals, unlike me, then you will enjoy some of its aspects. We see the Dorothy at the beginning having a small argument with her Aunt and Uncle and then the next after the tornado day she awakes in another dimension that looks very odd to her. This world has many animals and inanimate objects talking and witches, both good and wicked. She is welcomed by those new people and she tells them her plans of going home. In order for this to happen, she needs to find the Wizard of Oz. On her way to his castle she makes some new friends that are also interested in having things changed in themselves and the adventure continues. This unfortunately happens for more than half of the 1 hour and 52 minutes duration, but finally the most interesting part begins when they reach the Emerald City and have to complete the final task to get what they want.

All those characters gather together and head off on the winding yellow brick road to find the Wizard of Oz to have those issues they have solved.

Everyone was excellent in their roles, but I think my favorite acting is delivered by Bert Lahr, who plays the Cowardly Lion. There were many funny scenes, while he manages to convey in a successful way the contrasts between a powerful lion and his cowardly ways. Also there were times when I forgot he was an actual human playing an animal role, because he was very convincing.

Direction was very good, though not something special. The only interesting scenes are the ones where we see the main protagonists chased by the witch and her soldiers. They are scary scenes and since we sympathize with Dororhy’s squad we feel unnerved hoping that they will find a way to be saved, either by Glinda, or by some clever maneuvering.

One of the most spectacular aspects of this movie is the cinematography by Harold Rosson. In the first minutes of the movie everything is in a sepia tone black and white. This changes to vivid Technicolor when Dorothy enters the land of Oz, which reminds her nothing of Kansas. The setting is full of rich primary colors — greens, reds, yellows — which can be observed from the roads, the forest and the poppies, to the horses that constantly change color in the Emerald City of the Wizard of Oz. Generally, it seems that colors play an important role in the movie and that can be said by the significance of the poppies, the snow and the castle, which is full of shades of green.

The finale of The Wizard of Oz is down to earth, but somewhat unoriginal. I did not expect  that I would feel bored while watching the movie, but I did. It is a nice one for the time that it was shot, cinematography and acting were fine — very innovative at the time — it is just not my style.