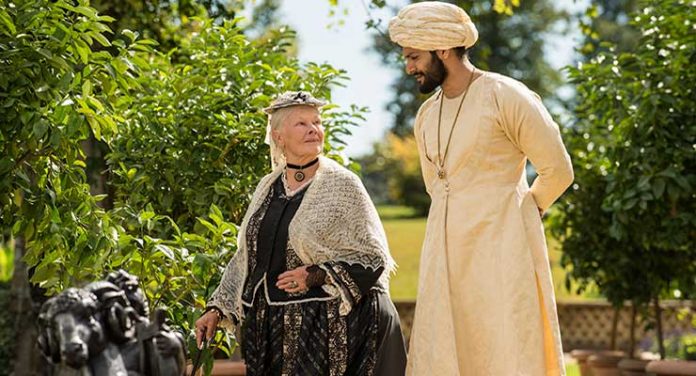 The British Empire had already ruled India for three decades, ushering in an era of utter repression for its indigenous peoples, a fact kept mostly below the surface of Victoria and Abdul when Queen Victoria (Dame Judi Dench) celebrated the Golden Jubilee of her reign in 1887. In recognition of this occasion, the British Raj sent the handsome Abdul Karim (Ali Fazal), a lowly prison clerk, and his companion Mohammed (Adeel Akhtar) to England to present a mohur or gold commemorative coin bearing the monarch’s image.

The Queen is in her dotage and has been a widow for more than three decades  Her meeting with Abdul sets the storyline in motion, much to the discomfiture of the royal household, led by Sir Henry Ponsonby (Tim Piggott-Smith) and Baroness Churchill (Olivia Williams). Abdul, a Muslim, becomes better acquainted with Victoria and agrees to be her “Munshi” or one who will teach her Hindustani and Urdu. The Queen has become weary of the royal business and having to deal with her son and heir to the British throne, the priggish Bertie (Eddie Izzard).

Abdul draws even closer to his Queen and when he reveals that he is married, she sends for his wife and mother-in-law who arrive completely concealed in traditional burkas.  Victoria’s display of favoritism toward Abdul provokes those around her, and their friendship finally hit some bumps in the road. Concerns for Victoria’s increasing fascination with all things Indian (including a dedicated Durbar room at Osborne House on the Isle of Wight) are compounded by her apparent ignorance of the Muslim role in the Indian Mutiny. A fatwa has been issued against her, making it virtually impossible, due to security reasons, for Victoria to ever visit the huge country of which she is Empress. On the verge of sending Abdul back home, Victoria relents, dropping the guard of monarchy for an unveiled expression of human affection.  Bertie, her personal physician Sir James Reid (Paul Higgins), and Ponsonby, give the Queen an ultimatum: either Victoria give up this “intimate” relationship and send Abdul and his family home or they will have her declared insane. At the film’s dramatic apex, the Queen lucidly details the accomplishments of her reign, and her lengthy list of physical maladies and personal idiosyncrasies—in short, anything but evidence of mental instability. Victoria next confronts her entire staff and gives each member an opportunity to resign by stepping forward: and no one moves. 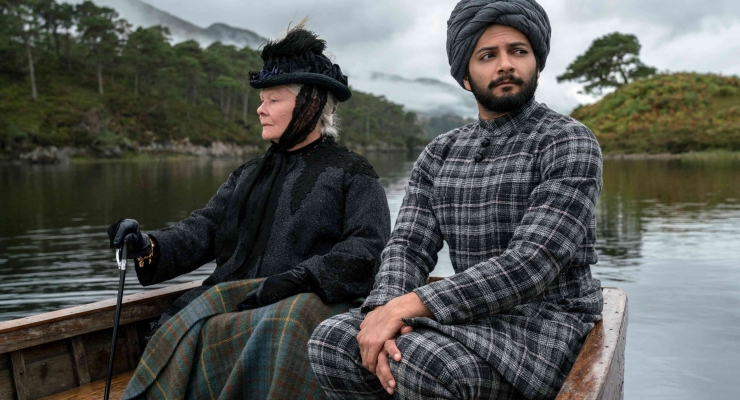 Based on a true account of this unique personal relationship, taken from memoirs of the real Abdul that were discovered four decades after Victoria’s death, there are certain liberties taken with history for dramatic purposes. Seen as a possible sequel to Mrs. Brown also starring Dame Judi as a younger Queen Victoria and portraying her relationship with Scottish servant James Brown, Victoria and Abdul paints a very different type of picture between a now-elderly Queen and a much younger man of very different ethnicity.

In a summer of films that have ranged from the hyper-dramatic Dunkirk to the rather dismal Blade Runner reboot, Victoria and Abdul is a winning historical drama. Blessed with a superb cast, Hall’s adaptation of Shrabani Basu’s book builds credible chemistry between the two leads with deft blending of dramatic and comic moments.  Director and fellow Englishman Frears is no stranger to the cinematic treatment of royalty, as evidenced by The Queen. His stewardship of this story steers clear of treacly emotionality and manages quite effectively to warm viewers’ hearts and moisten their eyes. A film to savor and see again, and one that is highly recommended.

Victoria and Abdul is in wide release in US theaters October 6, 2017.