Netflix Original Films has spawned some delightful comedies and for two years’ running this network has released a rom-com just in time for Valentine’s Day. Last year it was Girlfriend’s Day and this year it is When We First Met. Consider screenwriter John Whittington’s storyline to be an offbeat mélange of Groundhog Day and 500 Days of Summer, and you will get a pretty good idea of where this film intends to take its audience.

Professional slacker Noah Ashby (Adam DeVine, Mike and Dave Need Wedding Dates) goes to a 2014 Halloween costume party where he meets his dream girl Avery Martin (Alexandra Daddario, Baywatch). The evening starts out just fine and they head out to Danny’s bar where Noah charms Avery with his jazz piano playing. The bar has a vintage photo booth and the pair takes some zany pictures of themselves before returning to Avery’s house. Instead of the romantic night that Noah had anticipated, he only gets a hug and is relegated to the “good guy friend” list.

Three years later, Noah gets invited to an engagement party for Avery and the studly Ethan (Robbie Arnell, The DUFF) whom she had just met the day after the Halloween party. A depressed Noah gets drunk and leaves with Avery’s best friend, professional photographer Carrie Grey (Shelley Hennig, Roman J. Israel, Esq.). He drops himself off at Danny’s bar where best friend Max (Andrew Bachelor, The Babysitter) proceeds to console him and help him regain his sobriety. 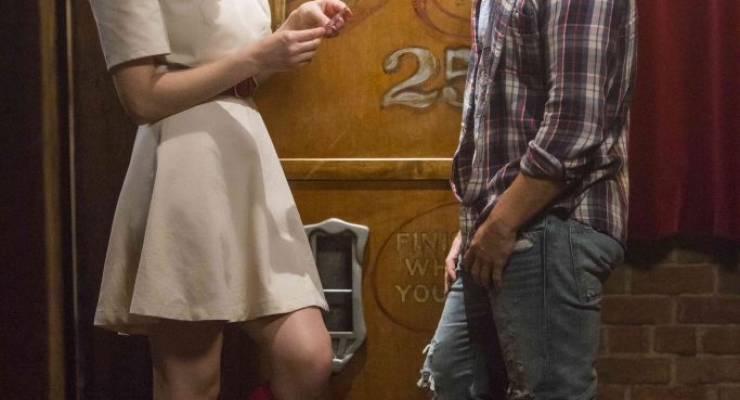 Later at Danny’s, Noah re-enters the photo booth and discovers that it is a time machine that takes him to October 31, 2014. Finally, this might give the moping young man another chance to achieve more satisfying romantic results with his precious Avery. Time travel turns out to be quite tricky as Noah finds that each subsequent visit to the past entails some unanticipated and usually undesirable consequences. Will he ever find his soul mate or is Noah doomed to lead a lonely life? Great powers of deduction are not needed to figure out how this one will end.

Adam DeVine has uncanny mugging ability, a welcome distraction here since the storyline for When We First Met is filled with the usual rom-com fluff. Noah may be a loser but as DeVine plays him, he is a lovable loser that you begin to root for in the first few minutes and continue rooting for until the film’s finale. He is surrounded by a good cast, particularly Andrew Bachelor whose Max is the perfect foil, i.e., everything that Noah is not. This is director Ari Sandel’s (The DUFF ) second feature-length film and it appears that he has very good notions about pacing and focus. If not terribly original (but how many new romantic comedies are anymore), When We First Met is still an enjoyable, feel-good movie, and just the perfect length for a Valentine’s Day watch while cuddling with your sweetie.

When We First Met is now available for viewing on Netflix

3.5 / 5 TheaterByte Rating
{{ reviewsOverall }} / 5 Users (0 votes)
Footprint Features | Wonderland Sound and Vision | MXN Entertainment | NetflixStudios & Distributors
TV-14Rating Certificate
USACountry
EnglishLanguage
97 Mins.Run Time
2.35:1Aspect Ratio
Ari SandelDirector
John WittingtonWriter
9 Feb. 2018Release Date
The Film
Summary
In this revisit of classic rom-com tropes, Noah (Adam Devine) spends the perfect day with the girl of his dreams (Alexandra Daddario) only to be relegated to the "friend zone" for three years until he unexpectedly get the ability to go back in time and alter the day over and over and change the past. A cute if not terribly original romantic comedy mixing in elements of Groundhog Day and 500 Days of Summer and a pleasant Valentine's Day watch.
What people say... Login to rate
Order by: