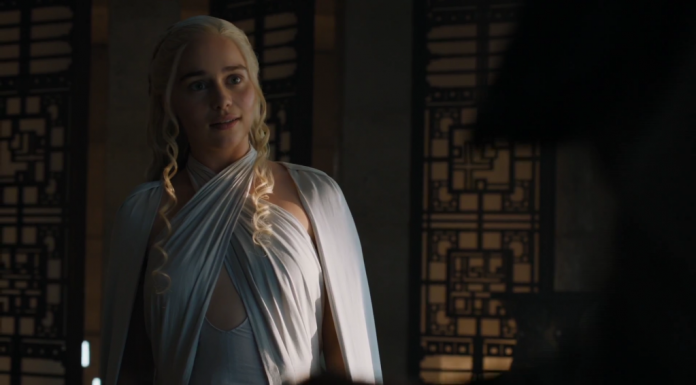 “Sons of the Harpy”

As usual, this episode of Game of Thrones had plenty of sexual innuendos, bare butts and hard nipples. Though the more prominent themes in “Sons of the Harpy” focused on manipulation and power struggles. Really, when aren’t these the driving forces behind Game of Thrones?

Oh Daenerys what have you done? The Sons of the Harpy are slaughtering your Unsullied. Dawdling around in Meereen is not how you’re going to win Westereos. Dany is stubborn, if she cannot rule Meereen then she thinks there will be nothing for her in Westereos, but that’s hardly the case. Meereen is a different world, a foreign place unaware of the customs Daenerys is trying to enforce. Whereas Westereos is a culture built upon decades of tradition, all of which Daenerys can enforce especially with an army. Now that Ser Barristan Selmy is disposed of, Deanerys will be desperate for a trusted adviser, she may even take Ser Jorah Mormont back. Especially when he delivers his Lannister prize, speaking of which Tyrion may be Daenerys best bet for both justice and vengeance. Wonder how the old bear is going to handle that?

Certain that someone will bring her Tyrion’s head, Cersei has begin to focus on the bigger picture. Now is her time to rule, while Tommen is married but still not much of a king. Cersei behaves atrociously pushing boundaries and literally getting away with murder. The woman is crafty and because of the way she’s gone about things, it’s difficult for Tommen to blame her directly. However, Margaery Tyrell knows better and if there is anyone who can beat Cersei at her own game its Margaery.

Much like her despicable mother-in-law Margaery is a master manipulator, particularly when it comes to men, though Cersei is the evil one. If left alone Margaery has the potential to be a benevolent queen and loving spouse. Jealous and insecure, Cersei is determined to make life for the new Queen as miserable as possible even if that means locking up her brother, who incidentally was to be Cersei’s future husband. Refusing to be married off, Cersei is asserting her power in Kings Landing.

Desperate to prove himself to the love of his life Jaime embarks on an impossible mission. Luckily for him he’s chosen the perfect companion. Hiring Bronn is akin to hiring at least five armed men maybe even a dozen depending on the skill level. Bronn is as quick with his tongue as he is with a sword so it’s always a pleasure to watch his scenes. He knows more than he lets on, he doesn’t believe for a second that Jaime is rescuing his “niece.” He also surmises that was Jaime who let Tyrion out. For a dumb swordsman Bronn is well informed, too bad he cannot capitalize on that! Stuck in Dorne doing all of Jaime Lannister’s heavy lifting probably isn’t the way Bronn would like to be remembered. I fear their adventures in Dorne may be doomed and with the way characters are killed off in this series I have little hope for their survival. 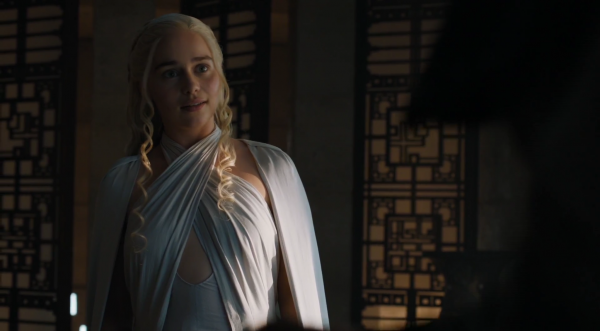 Speaking of survival, what is Sansa going to do?!? Oh sure Littelfinger gives her the you’ve-learned-from-the-best speech, but that only goes so far. Sansa is about to be married to one of the vilest men in the series, a man who skins his servants for the pure joy of it. No way is Sansa prepared for that kind of sadist. I’m guessing Littlefinger doesn’t know or doesn’t care. For him it’s one big game of chess and Sansa is his queen. He’s using her, protecting her and saving her but all for his own greater good (not hers). Whether or not Sansa understands this is a mystery; she’s either playing the game very well or completely oblivious. Currently in one of her more precarious positions yet, a position Littlefinger knowingly placed her in, Sansa is about to become one of Stannis’ most avid but silent supporters.

According to Littlefinger, if Stannis overthrows the Boltons, which is what he claims to be betting on, Sansa as the only Winterfell heir will be named Wardeness of the North. Sounds pretty good right? If however Stannis fails and the Boltons win, then Sansa will be forced to make her marriage work with the Bolton bastard at whatever cost.

Despite his obvious claim to the throne, not everyone approves of the Stannis Baratheon method. His “red woman” is at the heart of this, people don’t know what to make of her though some have taken to labeling her a witch. Though Jon Snow is fairer than most, even he doesn’t know what to think of Melisandre especially after she hits on him. In an effort to blatantly manipulate the new Lord Commander, Melisandre propositions him with her bare breasts and flowery language. She’s just inches away from consummating a truce between their two camps when Jon Snow catches himself and sends her away. Either Melisandre was testing him, or she underestimated his honor. I’m inclined to go with the latter.

While Melisandre may be the unsavory aspect of Stannis Baratheons camp, his daughter Shireen is the opposite. Through his diseased, yet recovered, daughter do we glimpse a loving warmth– a feeling Stannis rarely shows. Shireen humanizes his character in a way no others are capable. Stannis does not judge the scars on her face, he doesn’t care that she is a daughter and not a son, all that he cares about is her. In such a time and age this is a rare trait for a father to exhibit, especially one that is hell bent on ruling the kingdom.

Overall this was a fantastic episode sure to delight most fans!