10 Things I Hate About You: 10th Anniversary Edition Blu-ray Review 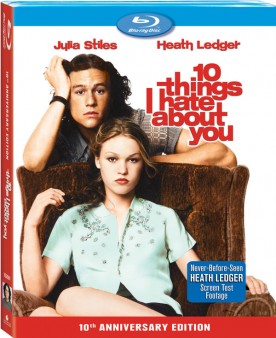 Somewhere in the 1999 teen romance 10 Things I Hate About You is supposedly an update of Shakespeare’s The Taming of the Shrew. In reality, what it is, is an outdated throwback to the 1980’s teen dramas of John Hughes. Not only is it a watered down version of the very un-P.C. Shakespeare play, but it is watered down Hughes, and that is doubly horrendous. 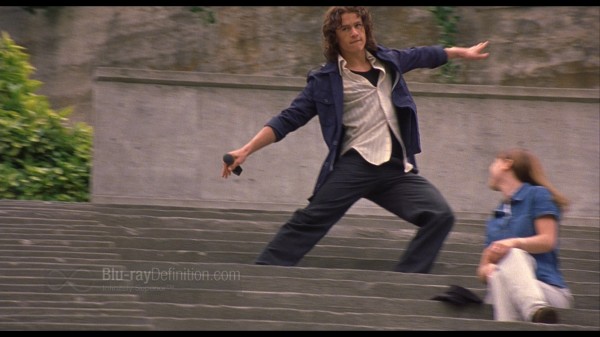 The “shrew” in 10 Things is Kat (Julia Stiles) a boy hating, Julia Plath reading, riot grrrl, if you will. Her sister Bianca (Larissa Oleynik) is the resident school beauty at Pedua High, and all the guys seem to want to date her including the obnoxious but popular Joey Donner (Andrew Keegan) and dweebish Cameron (Joseph Gordon-Levitt). The problem is, Bianca’s father will not let her date unless the somehow un-datable Kat — she’s too strong-willed and intelligent, you see — can find a date as well. So Cameron and his buddy (played by David Krumholtz) endeavor to set Kat up with Padua’s newcomer, the school’s bad boy Patrick (the late Heath Ledger).

Somewhere in all of this perplexity there is supposed to be a really hip and funny teen movie, but in 1999, the plodding direction of first-time big screen director Gil Junger, fresh off TV sitcom hits like Living Single and Dharma and Greg, decided to burden the teen romance with a soundtrack heavy with the sounds of the Seventies and Eighties, like it was a time warp right back to a John Hughes film. Let’s face it, folks, no high school kid was going to show up at a party in 1999 and crank up Joan Armatrading, George Clinton, or Letters to Cleo singing “I Want You to Want Me.”

The Shakespeare angle is also long forgotten a quarter of the way into the film as it degrades into an odd mix of slapstick, forced hipster dialogue, tiresome sexual innuendos, and underdeveloped subplots. This is no bard at work here, this isn’t even Sixteen Candles or Ferris Bueller’s Day Off, never mind that Save Ferris makes an appearance on the soundtrack.

The real attractions here are Julia Stiles and Heath Ledger who manage to pull away from the fray and exist in a world all their own. Stiles is a marvelous tomboy with a soft side and Ledger is the perfect bad boy charmer who’s really just a little kitten on the inside. Together they salvage what is not so great material and sculpt a little masterpiece inside a shell of mediocrity. 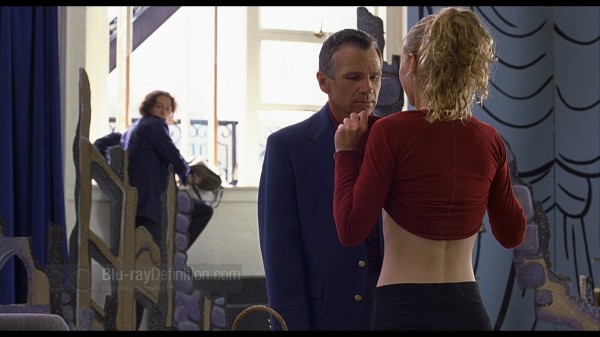 10 Things I Hate About You arrives in a 1.85:1 AVC/MPEG-4 1080p/24 encoding from Touchstone. The now 10-year-old film’s source is clean with very little in the way of source damage apparent in this transfer, flesh tones are consistent and natural and film grain is preserved. Detail is a little inconsistent, at times looking very sharp, clear and detailed and other time a bit soft with very heavy amounts of grain. Color reproduction is one of the strongest aspects of this transfer, looking very vibrant and natural without being oversaturated. 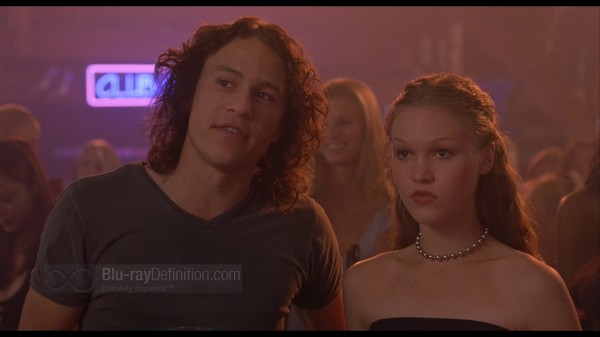 The English DTS-HD Master Audio 5.1 soundtrack is very front-heavy, with the surround channel being used mainly for some low-level ambience. Dialogue is clean, but not very full sounding.  The soundtrack does have many opportunities to open up with an expansive and dynamic soundstage, however, with the many alternative songs utilized during cut scenes, party sequences and club scenes. The biggest problem with the overall sound is the slightly tizzy sounding high frequencies, however. 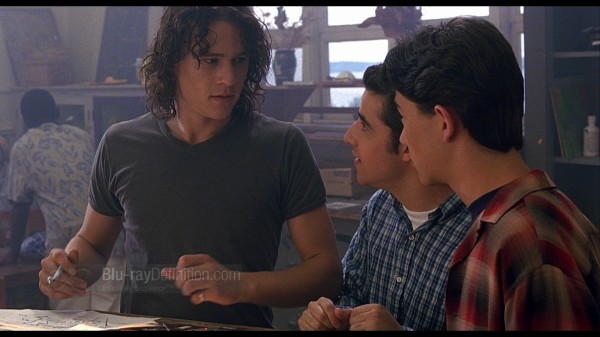 For a “10th Anniversary Edition” the supplements on 10 Things I Hate About You are surely slim pickins. There are only two bonus features proffered by Touchstone, and one is the obligatory Audio Commentary with certain cast members and the co-writers. If fans want a glimpse more of the late Heath Ledger and the promised, never-before-seen screen test footage of the late star, they’ll have to view the clumsily titled 10 Things I Love About 10 Things I Hate About You 10 Years Later featurette and glimpse it mixed in with the rest of the footage. 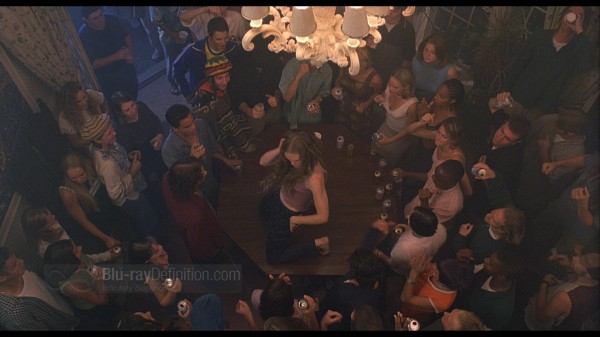 Perhaps 10 Things I Hate About You has gone on to reach a certain stature in the history of teen films more for what the young actors, most making their very first film appearances, went on to achieve afterward, than for what they actually accomplished in 10 Things itself. It still stands as an interesting time capsule of sorts, a gathering together of talents that would set the landscape of the century to come, displaying glimpses of what would make them so successful in the coming century’s first decade. Although this 10th Anniversary Edition from Touchstone is rather barebones, it is still a solid effort that is on par with other catalogue films released to Blu-ray in this genre.