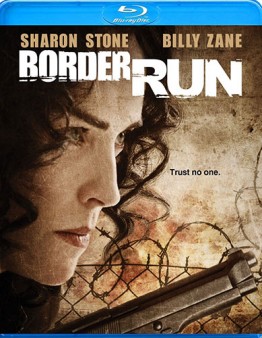 Border Run tells the story of Sofie Talbert (Sharon Stone), a Phoenix television report known for her hard-nosed right-win journalism, specifically exposing liberal politicians on illegal immigration. But when her relief-worker brother goes missing south of the border, Sofie must now use her investigative reporting to both find her brother. Along the way, she soon discovers something that even she never expected.

For about half of the film’s 96 minute run time, Border Run works – on nearly all levels. We see Sharon Stone turn in one of her better performances in years, the plot keeps our interest, and the direction is swift, clean and interesting. While there isn’t a ton of action per se, I found myself more interested in the behind the scenes information, so to speak. Once we cross the border, the film felt like it lost any and all motivation. We’re thrown into random action moments, sequences that feel as if they were added in to A) pass time, and B) allow the use of a gun on the front cover of the film. While the entire film isn’t bad, the latter half just didn’t work for this guy. Maybe it will for you. I’d recommend you check this one out and judge for yourself.

Border Run arrives with a 2:35:1 framed, AVC MPEG-4 transfer. The film’s color palette focuses on the bright, hot sun. Yellows dominate, as do reds and blacks (during the night sequences.) Detail rarely falters, as facial close-ups/texture details are rock solid. Wider shots of the main Arizona locale also result in an accurate, clean looking hi-def image. All in all, this is a solid effort from Anchor Bay.

The film includes a Dolby TrueHD 5.1 mix, one of which is equally as good as the aforementioned video. Dialogue, as one might expect, is well reproduced. Atmosphere can vary from nearly non-existent in some of the quieter moments, to almost too active during the heightened sequences. LFE, for example, is a bit too active here, constantly ringing out a deep response. While this might sound nice for demo purposes, I found it to be a bit too much considering there wasn’t THAT much action occurring to warrant such LFE. Outside of that, this lossless mix does its job.

Anchor Bay’s Border Run works, at least for 40 minutes or so. The latter half of the film felt forced, but maybe it’s just me. Based on that, I’m going to recommend you give this one a rental and judge for yourself.