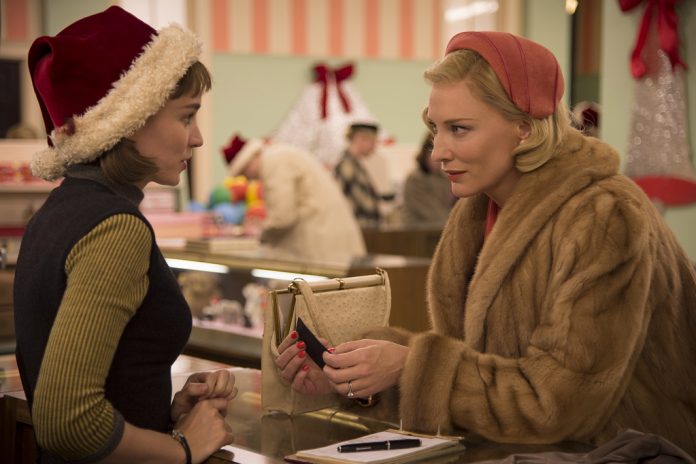 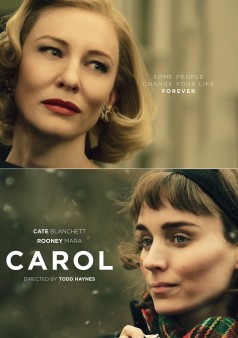 Director Todd Haynes, in his first film since 2007’s I’m Not There, has crafted this movie in a style and theme that he’s used before. In Far From Heaven Julianne Moore’s housewife faces a marital crisis — her husband is caught kissing another man so she takes comfort in the arms of a black man. Whereas in Carol, Cate Blanchett’s unhappy housewife falls into the arms of another woman. Both of these films take place in the 1950’s where it’s all dewy and lush and beautiful. And the attention to detail in both films is amazing, capturing the fashion and essence that was the norm of it’s time, where everyone made an effort to dress up, especially the women, even just to go shopping. 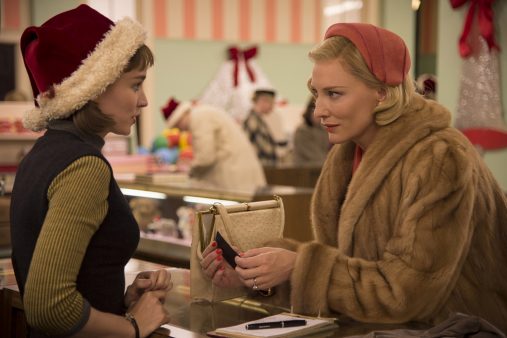 Blanchett’s character, Carol Aird, is in a loveless marriage but it’s not because her husband is cheating on her with another man, it’s because Carol is cheating on her husband with another woman. It’s not a mid life crisis that Carol is going through, she’s been linked to Abby Gerhard (Sarah Paulson) in the past, and Abby has always been in the shadows throughout Carol’s marriage to Harge (Kyle Chandler). Harge still loves Carol, he wants to stay married, but Carol insists that the divorce still go ahead, which is very difficult for the both of them because of their young daughter. But one day Carol goes into a department store and is eyed by employee Therese Belivet (Rooney Mara), who suggests to Carol to buy a train set for her daughter. Carol and Therese have chemistry, and the next day Carol invites Therese out for lunch to thank her for helping her out with her purchase. Eventually they start seeing each other more and more, and they fall headstrong into a relationship. Carol, who has the perfect husband and the perfect house, pursues a relationship with Therese, at the risk of losing custody of her daughter. Harge, in utter frustration over Carol’s newfound relationship, seeks full custody of their daughter using a morality clause as the reason. And Therese risks her impending marriage to her boyfriend Richard (Jake Lacy) to be with Carol, and the ladies embark on several trips together. It’s not until New Year’s Eve where they consummate their relationship in a full on one minute lip lock, which leads to a sexual act, again full on, there’s almost nothing left to the imagination. But will Carol’s impending divorce and the threat of losing her daughter and Therese’s burgeoning career as a photographer get in the way of their relationship? 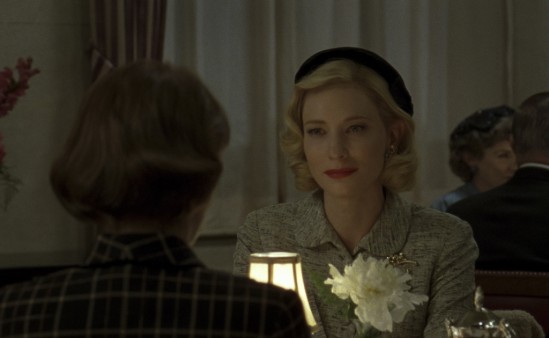 Blanchett is magnificent as Carol, who risks losing her daughter yet has strong feelings for a much younger woman. Mara is even more superb as Therese, her innocence and naivete in full display. Both actresses are excellent, yet it’s Mara who ups Blanchett in the acting arena. The movie basically revolves around Therese and her coming of age not just with her career, but with her sexuality as well. It would be a shame if Mara is reduced to supporting actress level as Blanchett does get top billing. While they both deserve Best Actress Academy Award nominations, it’s Mara who should be on the podium. Chandler is also excellent as Carol’s husband; he’s got an ideal 1950s look about him. Carol, based on the novel The Price of Salt by Patricia Highsmith, was written at a time when its subject was considered scandalous, which Haynes truly captures. Carol was filmed with Super 16 format 16mm film stock to produce the muted hues of glamour magazines of the era, it’s romantic, dramatic and lovely to watch.