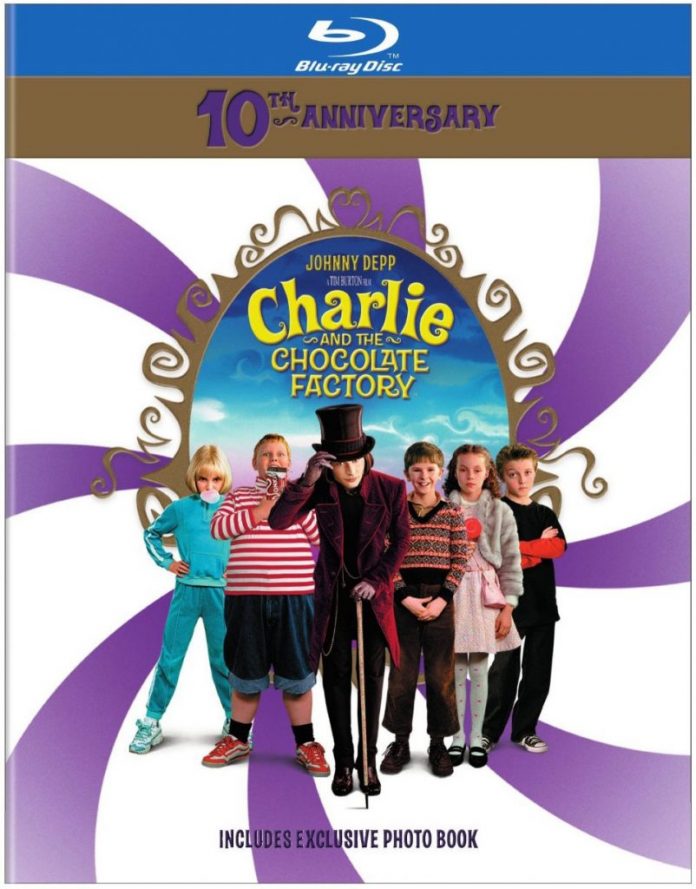 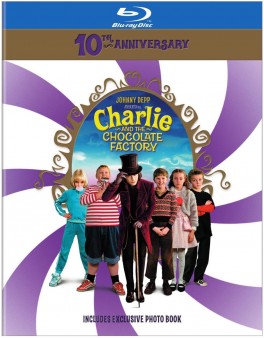 Editor’s Note: Per Warner’s request, no screen captures are available for this review

Tim Burton directed this 2005 update of the famous Roald Dahl children’s tale, Charlie and the Chocolate Factory, which had been previously brought to the screen in 1971 as Willy Wonka and the Chocolate Factory with Gene Wilder in the role as the eccentric candy tycoon. Burton’s film, (and Depp’s Wonka) is decidedly more creepy, understandable given the more mature sensibilities of millennial kids of the time, but it loses some of the childlike charm of the previous film, despite some slightly heavy-handed efforts at creating a colorful candyland.

Willy Wonka (Depp) is the eccentric and mysterious candy making tycoon that is the envy of the world, but the candy maker and his chocolate factory are notoriously reclusive. Unexpectedly, Wonka decides to give five children from around the world the opportunity to tour his factory along with their parents. He slips five golden tickets randomly into the wrappers of Wonka chocolate bars. Charlie Bucket, a poor lad who lives in the shadow of the Wonka factory with his family, manages to obtain one of the golden tickets that grants him passage to the factory, along with his Grandpa Joe (David Kelly). The other four tickets go to the snobbish Veruca Salt (Julia Winter), the gluttonous Augustus Gloop, the overachieving, competitive Violet Beauregarde (AnnaSophia Robb), and the tech junkie Mike Teavee (Jordan Fry). On their visit to the Willy Wonka Chocolate Factory, the children and their parents will not only get the tour of their lives in a magical place, but they will also get unexpected life lessons they never saw coming.

At the time of its release, Johnny Depp’s portrayal of Willy Wonka got a lot of comparisons to Michael Jackson given how weirdly eccentric, downright creepy, and very cruel toward children it came across. Looking back on it ten years later, Depp’s Wonka still seems very off-putting, to put it mildly. He comes across much more strangely than Gene Wilder’s simpler trickster. Depp seems to be hiding something more sinister beneath the candy-colored shell.

Tim Burton does coat the film in as friendly a way as possible, however, and, the strangeness of Depp’s portrayal aside, this Charlie and the Chocolate Factory will definitely please more contemporary young audiences given its dazzling array of visual effects, big musical numbers by the Oompa-Loompas scored by Danny Elfman, and mischievous children (who all go punished, parents).

It doesn’t seem like Warner has done a new mastering or even re-authoring of this previously released Blu-ray Disc, simply repackaged it. The older 1080p transfer could very well be a holdover from the format war days (with HD DVD) and while it is good enough, it is hardly spectacular in the way this colorful, special effects-laden film could be. There’s a strange sort of softness that permeates and nothing is extremely crisp. Colors look good, but not as candy colored and rich as we’d like them to be.

We can tell once again that this is a simple repackaging of an old disc that Warner hasn’t even re-authored by the fact that it auto-starts and defaults to Dolby Digital 5.1 as its audio option. You’ll have to actively select the lossless Dolby TrueHD 5.1 soundtrack from either the pop-up menu or via the audio menu on your remote. As for the sound, it’s good, but not staggering in any sense. Once we get to Wonka’s chocolate factory and the amusement park-like atmosphere, things do open up and we are surrounded a bit by some solid effects in the surround channels, such as when the group take a roller-coaster boat ride down the chocolate river. Dialogue is clear and full and the musical numbers are punchy if just a tad tizzy on the high end.

This is the 10th Anniversary Edition, but we don’t much of anything special out of Warner for this release. The featurettes are ported over, and the only “exclusives” are a softcover picture book and note from Tim Burton.

A fun, strange, and visually enticing update of the Roald Dahl classic, this Tim Burton interpretation of the story may not live up to expectations of those who grew up with the classic film starring Gene Wilder, but younger audiences can still appreciate this one.