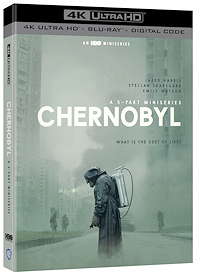 Chernobyl is a 5-part limited series from HBO that follows the 1986 disaster that started on April 26, 1986 at the Chernobyl Nuclear Power Plant in Ukraine, which was then part of the Soviet Union. An explosion triggered a massive fire and nuclear meltdown that spread high doses of deadly radiation across Ukraine, Belarus, Russia, and reached as far as Scandinavia and Western Europe.

The series focuses in on three main characters — the top Soviet nuclear physicist Valery Legasov (Jared Harris) who realized the scope of the disaster from very early, the nuclear scientist Ulana Khomyuk (Emily Watson) who determines to investigate what led to the disaster, and the party apparatchik, Soviet Deputy Prime Minister Boris Shcherbina (Stellan Skarsgård) assigned by the Kremlin to get the situation under control and keep the information of the disaster from getting out — who must come together to try to get the disaster under control and save the lives of millions of people, while also towing the Communist Party line and keeping the information under wraps and underplaying the seriousness of the situation.

From the opening episode “1:23:45” the series sets a tone of suspense, doom, and mystery. This is human horror at its finest, and what makes it even more compelling, and more riveting is this is not a fiction, this is a docudrama of a real event that held the world in thrall and in fact is still causing deleterious effects. One stunning and gut punching moment in the series comes when a group of miners, brought in from a local coal mine to dig under the nuclear plant’s core, get so hot and knowing they are being exposed to deadly radiation anyway decide to strip completely naked just for some relief. This series also does not shy away from the physical horror of the effects of severe radiation. Some of it may be too stomach turning for the faint of heart.

All around, this is a powerful series with Emmy, Golden Globe, and BAFTA-worthy performances from the A-list cast, a visually cinematic production (the fire ablaze in the first episode is an awesome and heartening sight).

Chernobyl was an original digital production shot on the Arri Alexa Mini with Cooke Speed Panchro Lenses at 3.2K resolution and a 4K DI was used in the mastering stage. This 4K Ultra HD Blu-ray comes framed at the original 2.00:1 format with an HEVC 2160p (4K) Dolby Vision encodement from Warner Bros. Home Entertainment. This mini-series is an odd choice for HDR given the very muted color palette. There isn’t a lot here to ‘pop’ outside of some scenes where you can spot flashlights or headlights that glow very nicely against a dark background. One example is the scene where the divers head into the dark tunnels. The series lingers in greyish, bluish tones and often cakey looking flesh tones, this is not an aftereffect of the Dolby Vision grading but an artistic effect. Once you get used to it, it does work to help heighten the intensity and gloom of the situation, but I don’t think it will become reference material any time soon. That said, there is a beautiful amount of detail and shadow detail is also excellent, which is great given how much of this series takes place in the dark or in shadowy backrooms.

IMDb lists this series has having an Atmos soundtrack, but that certainly is not available on this 4K Ultra HD release. What we do get, however, is a very good lossless English DTS-HD Master Audio 5.1 mix. This is a dialogue-driven series so much of the sound is spread across the front three channels, but there is a good amount of atmospherics and the score is well-balanced into the mix, filling the channels.

We get the obligatory “Inside the Episodes” making-of for each episode as well as a number of brief featurettes that delve into the Chernobyl disaster and the making of the series. A digital copy code and Blu-rays with the series and bonus features are also included.

Chernobyl is worthy of all of the accolades that have been cast its way. I’m sorry I took so long to watch this limited series, but that only means I got to see it for the first time on this excellent 4K Ultra HD Blu-ray release from Warner Bros. It is also available in Blu-ray and Steelbook editions.

Load more
The account of the 1986 Chernobyl Nuclear Power Plant disaster in Ukraine, Soviet Union, and the subsequent health and political fallout is told in five gripping episodes. The 4K Ultra HD looks superb despite the muted palette not being the best visual material for the Dolby Vision HDR.Chernobyl (4K Ultra HD Blu-ray Review)