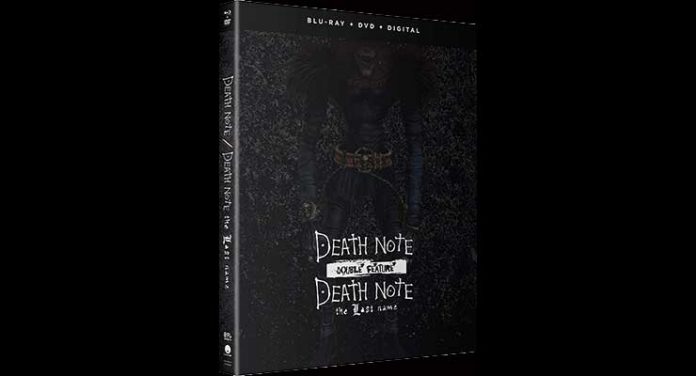 Death Note is the story of young Light Yagami (Fujiwara Tatsuya), who finds a mysterious note book called “Death Note.” Whoever has the death note in their possession wields the power of death to anyone in the world. All they have to do is write the name of the person they want dead and the book grants it. The more descriptive one is on the manner of the death – then that’s how it shall be done. The keeper of the death note, or should I say, the “handler” that passes it on from host to host is the Death God known as Ryuk. He is invisible to those that are not in possession of the notebook. He’s dressed like a goth rocker with a ghoulish visage and a penchant for apples.

Light continues the quest for “world peace” by killing the world’s most ruthless criminals. These series of events bring out “L” (Ken’ichi Matsuyama), who is basically the Sherlock Holmes of the modern world but much younger, Japanese, and is constantly eating food. L teams up with the special unit investigating the deaths. Things begin to escalate as law enforcement get dangerously close to Light.

With that being said, and this being a double feature, we’ll move right along and describe the sequel called Death Note: The Last Name. The Last Name starts off almost immediately where the first film left off. L becomes front and center along with The Last Name also features an additional Death God in the form of Rem. He’s got an “emo” face but an almost skeletal looking body. He’s not as manic as Ryuk – almost a bit of an introvert.

This chapter of the film obviously has more than one notebook since Ryuk and Rem are running around with those in possession of it. L is still working with law enforcement and is trying to recover it. Light isn’t doing so well since the note book and its powers have gone to his head – he’s turned into a bit of a maniac.

This was my first venture into the Japanese language versions of Death Note and I thought these two films were great. I always liked Ryuk’s design. The one jarring thing is that of the CGI faces. They look really weird and fake yet the bodies look great in their environments. This was obviously early motion capture, so there are some things that can be overlooked. The back and forth procedural between Light and L and the police along with the Death Gods is thrilling, as they chaos reigns in Japan and other parts of the world. I should also mention that I have not watched the anime. I’ve only watched the Netflix remake from last year. I will say that these two films bury the Netflix version.

If this is your first foray into the world of Death Gods then you have chosen wisely. Death Note / Death Note: The Last Name make for a nice starter package to the live action world of Shinigami. For those want more, there is an anime series and that aforementioned Netflix film.

Death Note / Death Note: The Last Name are presented on a singled Blu-ray disc in 1080p, 1.78:1. The high-definition image is quite strong. Contrast and sharpness levels are kept intact. The films look great for being almost 15 years old – one would think that they were just filmed yesterday. The color palette is rich and vibrant. Black levels are stable and crush was not a problem. Softness does creep in here and thee but that’s mostly when Ryuk and Rem make appearances. Their faces lack detail, so the highlights and shadows on their facial features look weird.

Death Note / Death Note: The Last Name are presented in Dolby TrueHD 5.1 lossless surround sound. Both films feature dynamic soundtracks that totally kicked butt. There are several instances of bloody shootouts that really put the rear surround channels to work. The LFE channel also brought the low-end rumble when needed. Dialogue levels were clean and crisp – no distortion was audible. The film can be quite dialogue heavy at times but the center channel did its job in reproducing those levels nicely.

Death Note / Death Note: The Last Name contain no additional special features. A DVD copy of the films is included with the Blu-ray, making it a 3-disc set. A Digital Copy is included, as well.

Death Note / Death Note: The Last Name – Double Feature (Blu-ray Review)
3.3 / 5 TheaterByte Rating
{{ reviewsOverall }} / 5 User Rating (0 votes)
TV-MARating Certificate
Funimation | Nippon TV | Warner Bros.Studios & Distributors
Kaneko ShûsukeDirector
Oishi TetsuyaWriter
266 MIns.Run Time
$34.98MSRP
28 Jan. 2019Release Date
1.78:1Aspect Ratio
1080p AVCVideo
Japanese Dolby TrueHD 5.1Audio
EnglishSubtitles
The Creative Content
The Video
The Audio
The Supplements
Summary
Light Yagami finds a powerful notebook granting him the power to dictate how people will die with the aid of a "shinigami" or demon. Death Note / Death Note: The Last Name - Double Feature is a great starter kit for those interested in the world of Shinigami. It's thrilling and has a bit of something for everyone. They're cool genre films and the fact that they play as a double-feature also sweetens the deal up a bit.
What people say... Login to rate
Order by: