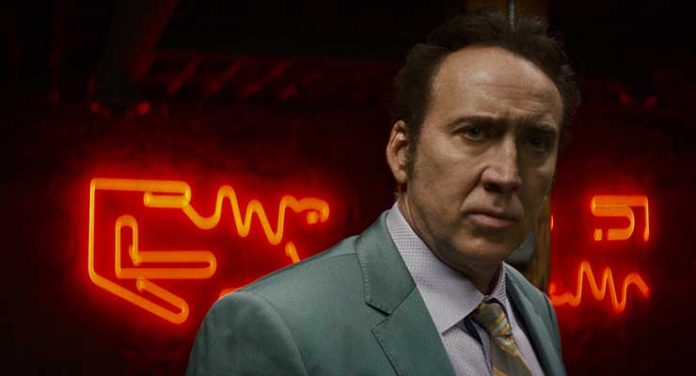 Director Paul Schrader, most famous for penning the screenplays to such classic films as Raging Bull and Taxi Driver, here steps behind the lens for one of his infrequent but not uncommon stints as director (he’s directed such films as American Gigolo and more recently The Canyons).

Dog Eat Dog, based on an Edward Bunker novel, brings together two big-name actors, Nicolas Cage and Willem Dafoe, and the less well-known Christopher Matthew Cook for a dark comedy crime thriller about three ex-cons who find themselves struggling to make it out in the real world.

Cage plays Troy, the last one of the three to get out of prison and the one with all the plans on how the trio can make some quick cash. Dafoe is Mad Dog, an unstable but loyal member of the group who took a fall for Troy once in prison right when he was readying to come up for parole. Cook plays Diesel a hulking brute of a guy with a bad temper who’s supposedly brainy and could have been a lawyer or something like that. We know this because Cage’s flat, emotionless voice over tells us so, but none of Diesel’s actions actually show us how intelligent he is. After a string of small time jobs for a mobster called El Greco (director Paul Schrader) like robbing a heroin dealer in Cincinnati while impersonating cops, the three agree to take on a job kidnapping a baby. They’re all backed up against the three-strikes law and they refuse to do the menial work that the felon assistance programs can get them, so it’s go big or nothing at all. Of course, they all pretty much know that the job will turn sour before they do it, but they agree to do it anyway, vowing to all go down together – kill each other – rather than get taken in.

Whatever it is that Schafer was trying to achieve with Dog Eat Dog, it didn’t work. There’ s just something wrong with the film from the beginning. From the incessant voice over by Cage that plays like a poor man’s version of Goodfellas to the misguided use of black and white imagery early on in a strip club scene involving the three cons, Dog Eat Dog gives off the feeling of a crime drama grasping for poignancy (it opens up with a TV debate bout the second amendment, but, why?), but in the end just throws together bits and pieces of style from many sources and turns out a haphazard, b-movie piece of pulp. The opening scene with Willem Dafoe set in a Barbie-esque house of tacky pink furniture and 1970s lighting puts us in a mindset like we’re in a time out of place, sort of like a Tarantino film where you don’t quite know what era you’re in. The scene turns violent quickly, not unlike Tarantino. The black and white strip club and strange twist ending that finds Cage putting on a bad Humphrey Bogart impersonation is almost reminiscent of a surreal, David Lynch alternate reality.

The bulk of Dog Eat Dog is basically just three idiots out of prison doing bad things and there’s nothing special about any of it, neither the dialogue, the direction, nor the acting. Only Dafoe stands out in that Dafoe kind of way as the annoyingly loquacious criminal who, though vicious at his core, is ultimately needy and insecure about his wrongdoings. 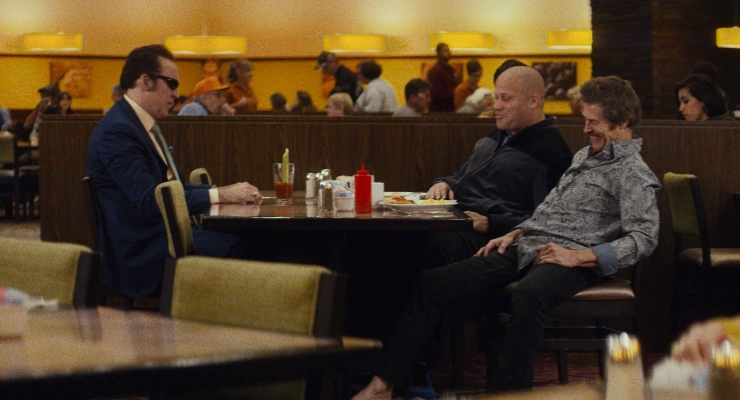 Dog Eat Dog is not a great looking film, but it works for the material at hand, often times looking gritty and almost pushing over into noisy in the darker scenes where the shadows sometimes do not yield so much nuance as much as they do a thicket of grain and some barely perceptible outlines of objects. That said, this AVC 1080p encodement framed at 2.35:1 looks natural and devoid of major issues like edge enhancement or any sort of color banding. The flesh tones are mostly accurate, when they want to be, but since there are moments when for artistic purposes the color tones are tweaked or we are in black and white, that wavers as well, such as in the opening act with Davoe in his girlfriend’s pink, almost Barbie looking house. There’s a certain “1970s” quality to the color palette there and a push in the skin tones.

An atmospheric English DTS-HD Master Audio 5.1 soundtrack is included for Dog Eat Dog. It surrounds you in good, solid sound effects and the at times hypnotic and other times pulsating score, offers up clear dialogue and good punchy mid- and low range that conveys the various gunshots with ease.

The director audio commentary is the best thing on this disc. Skip the non-effort “intro” recorded on cellphone no less, by Nicolas Cage.

Dog Eat Dog is a prime example of style of substance, poor script writing, and messy direction. Perhaps in the hands of a different filmmaker, this story could have been elevated, but here this indie crime thriller is just all over the place and basically taking elements from other films to glaze over its weaknesses.