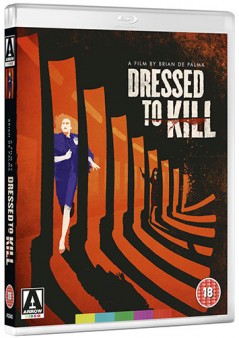 No one can accuse Brian De Palma (The Untouchables; Scarface, Blow Out) of being a low key filmmaker. His visceral, psycho-sexual Hitchcockian reworkings, such as Obsession, are always slightly controversial, big in their production values, and walk a thin line between self-parody and dead seriousness. 1980’s Dressed to Kill, one of De Palma’s best thrillers, plays on the writer/director’s strengths throughout. It’s edgy, modern for its era, and full of copious amounts of sex and violence that required a heavy-handed editing job to avoid an X-rating (this version brings the unedited film to UK viewers and seems so tame by today’s standards).

An update of Hitchcock’s Psycho complete with bookend, murderous shower sequences, Dressed to Kill begins as the sexually frustrated Manhattan housewife Kate Miller (Angie Dickinson; Ocean’s Eleven) has an oddly masochistic fantasy during sex with her husband. Later that day, she tells her psychiatrist, Dr. Elliot (Michael Caine; The Dark Knight Rises; The Cider House Rules), about her frustrations, and even flirts with him. She then goes to the museum, picks up a stranger and goes home with him for a sexual dalliance. Leaving his apartment that evening, she his violently murdered, slashed to death by a blonde in dark sunglasses wielding straight razor. High-end call girl Liz Blake (Nancy Allen; RoboCop; Blow Out) is the sole witness, and also becomes a suspect. Trying to clear her name, she finds herself being stalked, or so she thinks, by the very person she witnessed killing Kate Miller. Ironically, she has the aid of Kate’s son Peter (Keith Gordon), and they both believe that the murder is somehow connected to Dr. Elliot and one of his patients.

By today’s standards, especially with the great strides made by the LGBT community, De Palma’s story, which contains some real stretches about the psychology of transsexuals and, lets face it, pretty much casts them as lunatics, this film is, with good reason, quite dated, and more than controversial. But taken as a thriller that is not meant to be taken literally in the slightest sense and more an intentionally shocking dramatic-parody, if that even exists as something that isn’t an oxymoron, Dressed to Kill is sheer brilliance. The fantastic split screen cinematography of Ralph D. Bode, utilizing a technique that De Palma is so found of, here is more than just a visual affectation, but actually symbolic of the core plot, only to be found out much later. The hyper-sexual obsessions and the denouement, which brings with it an unforeseen twist make Dressed to Kill a purely satisfying experience.

Dressed to Kill is an anamorphic production shot on 35mm film that comes to Blu-ray from Arrow in a pleasant AVC/MPEG-4 1080p encodement. While it does show its age with some unavoidable film softness and just a hint of roughness in the grain that shows up in the skies or on walls, for the most part the image here looks clean, natural, and free from video noise or post-processing misdeeds like edge enhancement. Colors a bit pallid, but flesh tones look rather good and close-ups have a decent amount of texture. Some darker scenes tend to look just a little murky and lose some detail, but not enough to get up in arms about.

The film’s audio is offered in the original mono with a LPCM 2.0 (48kHz/16-bit) track and a 5.1 remix with a DTS-HD Master Audio (48kHz/16-bit) track. The monaural track is a good option for those who really want to stay authentic to the film and the era, and, surprisingly, it isn’t too boxy, offering up a good bit of dynamic range, clear and full dialogue with little clipping, and natural sounding ambience and sound effects. The lossless 5.1 opens things up nicely with a good spread of directional sounds across the front three channels and perfect use of the surrounds for atmospherics such as the sound of rainstorms and traffic noise. Lows are better extended as well in this surround mix, but certainly not ground shaking.

Arrow offers up the usual full slate of video interviews and making of documentaries to round out this catalogue release.

This explicit, involving crime thriller from the master of visceral thrills, Brian De Palma, is truly one of his early best. Dressed to Kill may be just a little dated in its overall mindset in the way it treats its subject matter, but that makes it none the less enjoyable and surprising.