Even in this debut film, Alex Garland shows his filmmaking mastery, over both the camera and the screenplay, the latter being no surprise at all. While Ex Machina (its title a reference to the phrase deus ex machina, literally ‘the god from the machinery’) explores some of the classic anxieties of science fiction such as the morality of scientific progress, the fear of humanity being superseded by its own inventions, and what is the true meaning of existence and life, Garland never lets these ideas overwhelm what is, in fact, a superbly balanced dramatic thriller at its core with an undercurrent of sexual tension that also runs through the film. This latter point only serves to drive home the questions of what does it mean to be alive, Ava being a sexually provocative AI, either by design, or by choice, something neither we, nor the central male characters of the film can answer. And is Ava’s sexuality a crucial part of her being self-aware or not? 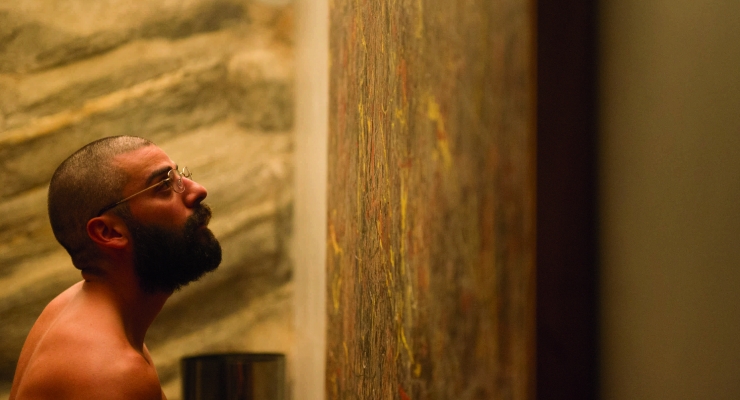 Ex Machina was shot in 4K on Sony CineAlta F65 and F55 cameras with Cooke Xtal Express, Kowa Prominar and Angenieux Optimo lenses with various cameras used for additional scenes. A 4K DI was used for processing/color coding. This new Ultra HD Blu-ray comes as a “pure” 4K HEVC encodement with HDR10 high dynamic range. The film is purposely soft with a subtle, cool color palette and some warm midrange highlights. Therefore the differences between the Ultra HD and Blu-ray are not as stark as some may expect, they are subtle and in keeping with the intent of the film, but they are noticeable. For starters, while the film still has a soft overall look, there is definitely more detail to bee seen. The opening scene on Caleb’s face in the office shows more texture and more “grain” for lack of a better term. The flight in the helicopter shows more texture in the snow, grass and waterfall. The colors and highlights are also slightly more vibrant. As Caleb and Nathan walk down the corridor when he first arrives at the house, the white and light of the walls looks whiter and brighter and when he enters his room, the amber color of the lit wall also stands out a little more than in the Blu-ray version. Again, these are more subtle changes, but ones that are in keeping with the overall visual subtlety of the film. If this Ultra HD looked “in your face” it probably wouldn’t look like Ex Machina. That said, if you’re expecting more “wow” this isn’t the upgrade for you. If you don’t have this film yet, then this is indeed a step up from the Blu-ray.

The DTS:X audio mix is an extremely subtle mix that has been available on the Blu-ray Disc release. Dialogue is full and free from clipping and there are some subtle atmospheric sounds that fill the surrounds and overhead channels – very subtle. The musical score is what is mostly immersive about this sound mix apart from the opening sequence where a helicopter flies overhead. There’s also an alarm that bounces through the room. This sounds good in the 7.1 compatible version (for those without a DTS:X equipped system) and even more realistic in DTS:X.