Denzel Washington stars and directs this big screen adaptation of August Wilson’s 1983 Pulitzer Prize-winning stage play about black garbage man Troy Maxson in 1950s Pittsburgh’s Hill District who is bitter that he was unable to parlay his stellar baseball career in the Negro Leagues into the Major Leagues because he was too old by the time the color barrier was broken. Troy (Washington) takes out his anger on his long-suffering wife of 18-years, Rose (Viola Davis) and mostly on their 17-year-old-son Cory (Jovan Adepo) who has hopes of becoming a professional football player – a dream Troy derails at every opportunity he gets.

For this film, Denzel Washington stayed close to the stage roots of the story. For the first 45-minutes, there isn’t even any musical score and, interestingly, no music comes into the film until a scene where Troy is called into his union commissioner’s office, the first time we see any white people of note, so it’s almost like the music heralds a world apart from the struggle Troy is trapped in back at home. Unfortunately, despite the colorful nature of Wilson’s language and the richness of the Hill District, which played so prominently in his so-called “Pittsburgh Cycle,” Washington’s vision of Fences on the screen stifles the work. We are limited to one or two spaces with cluttered set design and the lengthy monologues one expects from the stage, not the screen.

The film is saved from the undeniably powerful performances foremost from Viola Davis who spends the first two acts of the film showing a strong, but tempered and nuanced performance before finally letting loose with powerful emotion in the film’s dénouement. Washington is the center of the action and he puts at times is empathetic and at other times despicable as Troy, but we always get the sense of potential wasted, which is ultimately heartening.

Perhaps Washington’s hands were tied in taking on such a revered and already perfect play to bring to the screen; change it too much and it wouldn’t work, be too reverent and you get something a bit too stagnant and cloistered for the screen. Fences is not bad by any means, it just lacks some of the expansiveness we are used to for film and often seems too stagey. Still, with the powerful performances and dialogue, it is well worth watching. 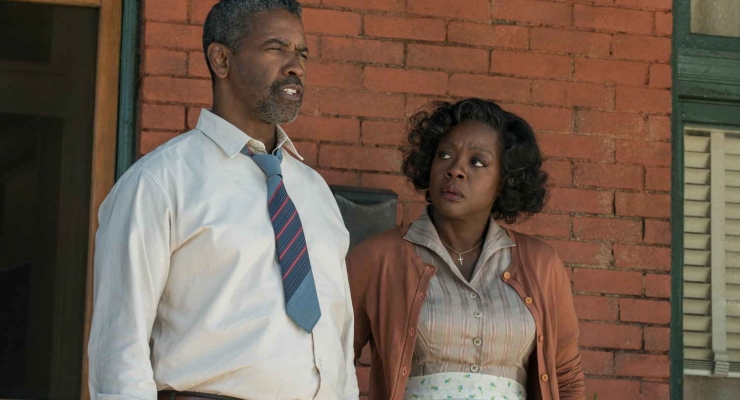 Fences was shot using Panavision Panaflex Millennium XL2 cameras with Panavision C-Series, ATZ and AWZ2 lenses on 35mm Kodak Vision3 50D 5203, Vision3 250D 5207, Vision3 200T 5213 and Vision3 500T 5219 film stock. A 2K DI (Digital Intermediate) was used in the processing and color coding stage. The film arrives on Blu-ray in an AVC 1080p encodement from Paramount that looks very filmic and organic. There are a few shots that look just a bit blurry and grainy, but that has more to do with the production than the transfer. This is a very clean and detailed transfer. The color palette is one that favors earth tones and the lighting is naturalistic, so nothing really ‘pops’, but the shadow detail and contrast is good.

Fences is a dialogue-driven film that for the first 45-minutes doesn’t even have any musical score or cues. That being the case, the lossless DTS-HD Master Audio 7.1 mix really seems like overkill, particularly since the mix is subtle to the extreme. There is hardly a sound that comes from the surround and surround back channels. There’s a scene with some rain that livens up the sound a bit and when the score does enter, it is handled with great delicacy. Otherwise, the dialogue is clean and intelligible and the mix is font-heavy with some slight stereo effects.

The selection of featurettes offer lots of interviews with the cast and crew and provide some background information on August Wilson and the Hill District whee the film is set.

Fences is a powerful drama that is aided by the A+ performances by Viola Davis and Denzel Washington. Only the staginess of this film adaptation hinders what is a solid, character-driven story and Blu-ray Disc.