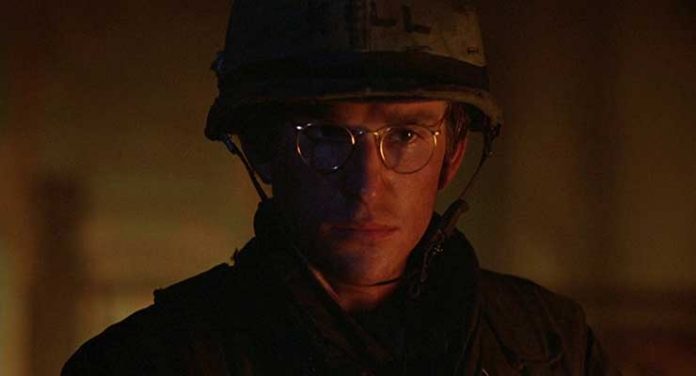 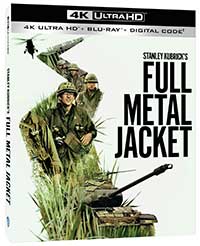 In 1987 the auteur Stanley Kubrick through his hat into the ring of what was becoming the well-worn genre of the Vietnam War movie by that time with Full Metal Jacket.

Based on the 1979 novel The Short-Timers by Gustav Hasford, Kubrick’s film has more in common with the almost elegiac film The Deer Hunter my Michael Cimino than later Vietnam films like Platoon. It follows a cynical US Marine recruit, “Joker” (Matthew Modine, Birdy, Vision Quest) who watches the dehumanizing effects the heavy-handed training of a foul-mouthed drill sergeant (R. Lee Ermy) and the violence and chaos of war in Vietnam have his fellow group of recruits.

Kubrick’s film is set in two parts, first in boot camp as “Joker,” “Gomer” (Vincent D’Onofrio) and others make their way harsh boot camp and the second as the film moves to Vietnam, and other characters come into the mix: the racist “Animal Mother” (Adam Baldwin), and “Eightball” (Dorian Harewood) to name a couple. Kubrick doesn’t fixate or fetishize the violence and chaos of war, but instead manages to focus on what the effects of war are on the soldiers.  At every turn, he chooses the interpersonal, the tragedy, and chooses not to linger on the violence. In the bootcamp act it’s a reaction shot on Matthew Modine during a crucial, tragic moment in the barracks head, in Vietnam, it’s the troops struggling to retrieve two fallen members during a brilliant Steadicam shot.

The performances that the perfectionist Kubrick draws out of the cast and his excellent use of the camera make Full Metal Jacket standout from the crowd of 1980s Vietnam films. D’Onofrio has the standout performance for one particular scene in the boot camp portion, even managing to steal the whole first half from R. Lee Ermy who pretty much owns the first half of the film otherwise. In the second half, it’s more ensemble, everyone doing their part and Kubrick’s visual aesthetic – Steadicam, wide angle shots, deep focus, lots of height – carrying the film.

As an entry into this genre, Kubrick likely couldn’t have done better. It has his signature all over it and Full Metal Jacket stands out as one of the best Vietnam War films, right up there with Apocalypse Now, The Deer Hunter, and Platoon.

The film is presented on 4K Ultra HD in an HEVC 2160p (4K) encodement with HDR10. In keeping with Warner’s previous Kubrick 4K releases, this one is top shelf. Although FMJ is a bit of a grittier looking film than the previous releases like 2001 or The Shining, it looks great here with a lot of detail, good grain structure that’s never overwhelming, and no noise or notable source damage. The HDR coloration also looks good. While I don’t think the HDR looks particularly bright especially given how the film’s palette can be a bit desaturated at times and often dark, and highlights don’t appear to ‘pop’ too much, the colors during the Vietnam sequences do look a bit more dazzling and show a wider variety of color. The flames from the bombs and other explosions and the colors of the sky on the horizon after the first Tet Offensive battle look gorgeous and more nuanced. On the the previous Blu-ray they look more amorphous, and yellow/orange versus the various colors from yellow to red they show here.

Full Metal Jacket on 4K Ultra HD includes the previously released 5.1 mix in DTS-HD Master Audio (it appears as LPCM on the included, repackaged Blu-ray Disc).  The original mono mix is also included in Dolby Digital. I have found that while the mono mix sounds a bit dull, the dialogue sounds a little cleaner than it does in the 5.1 mix, where some very slight audible clipping is more apparent. That said, the 5.1 mix for this film is certainly more engaging in one sense as it has magnificent low end during the battle sequences and spreads the stereo imaging well. There isn’t a lot of discrete use of the surround channels, but a good amount of atmospherics.

Another excellent Stanley Kubrick 4K Ultra HD Blu-ray release from Warner Bros. The visuals are great, and the sound is great. The only things disappointing are that the Blu-ray is a repackage and there are no new bonus features outside of the included digital code.

Full Metal Jacket is out on 4K Ultra HD Combo Pack on September 22, 2020 from Warner Bros.