Godzilla: King of the Monsters is the sequel to the 2014 blockbuster Godzilla, which was Hollywood’s best attempt yet at Westernizing this popular, long running Japanese ‘kaiju’ (monster movie) icon. Not to be confused with the 1956 film of almost the same name, which was a Hollywood rebranding of the original 1954 Japanese film Gojira with some added sequences, this new entry tries its best to live up to the Godzilla legacy by going to the kaiju playbook and resurrecting a slew of classic monsters from the franchise’s history. Unfortunately, even all of those monsters together in one movie don’t save this film.

It’s five years after the disaster that took place when the monster Godzilla first reappeared, created by nuclear testing. The crypto-zoological agency Monarch is now studying and a number of newly discovered monsters they’ve dubbed ‘Titans’ and a group of people inside the agency believe the only way to save humanity is to awaken them all so they can square off against each other and wipe out a large percentage of humanity. Thus, Mothra, Rodan, and the three-headed King Ghidorah are awakened and begin to wreak havoc on the world as they clash with each other and the mighty Godzilla.

What starts out promising quickly devolves into one of the slowest, most boring and incoherent paint-by-numbers Hollywood thrillers one can imagine – and that’s the only thing King of the Monsters manages to do quickly. The nefarious black ops paramilitary group working outside the purview of the government? Check. Evil genius mastermind with a plan to cleanse the world? Check! Wiley teenager who manages to be cleverer than the adults? Check. Check. Check!!! Get the picture? And the whole scenario drags on at such a slow pace with hardly any onscreen action with the monsters that are supposed to be the main event here. Instead we get monologues from Charles Dance – not that he’s not great, but, there’s a time and a place. We get shocked looks and cliché lines in dark control centers when Dr. Emma Russell (Vera Farmiga) reveals her plan over a video call (“you’re mad!”). And lots of pontificating and hunting down signals on fancy computerized screens. Yawn.

The CGI effects are great, there’s no arguing that, although some may argue if Godzilla looks authentically Godzilla-ish. Last time around there was controversy that the creature looked ‘too fat’. It does seem a bit more, um, rotund than typical in the Japanese films, but the technical aspects of the CGI are still eye-popping. The audio is also magnificent in this film, it will rock you right out of your seat and rumble through your skull turning your brain to jelly – well, maybe that’s not a good thing, but you get the point. Unfortunately, the good all begins and ends there with this movie. They’ve sucked all the fun out of Godzilla. It doesn’t even hold up as just a silly, campy, monster movie because it takes itself so darn seriously it makes it difficult to overlook all the flaws. 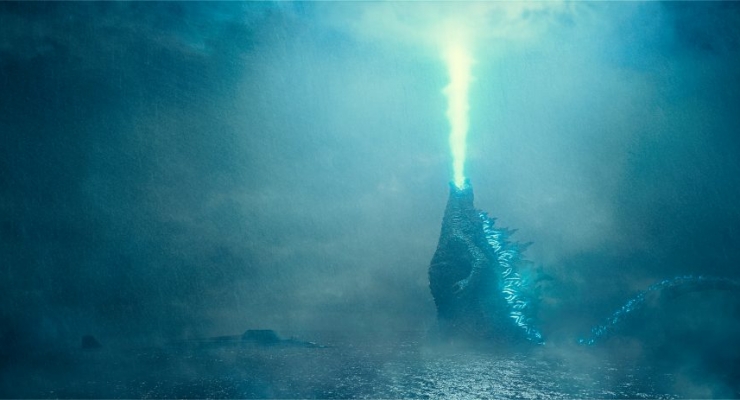 Godzilla: King of the Monsters was shot on the Arri Alexa 65 with Panavision Primo, Primo 70, C-, D-, E-, G-, T-Series, ATZ and Nikon Nikkor lenses at 6.5K and the Arri Alexa Mini with Panavision C-Series lenses at 3.4K and a 2K DI was used in post-processing. The film comes to 4K Ultra HD Blu-ray with an HEVC 2160p (4K) encodement framed at 2.40:1 and mastered with both Dolby Vision and HDR10+ HDR. Both formats are backwards compatible with standard HDR10 HDR. My reference LG OLED display and Marantz AVR handle Dolby Vision, so that is how the disc played back for me. It is gorgeous to look at, despite having used a 2K DI rather than 4K. Detail is excellent, and one can see the original high-resolution capturing left a lot of finer details in the source. The wide color gamut offered by Dolby Vision was dazzling for the fight sequences between the monsters, the fires and flames with glowed with more radiance thanks to the dynamic range as well. The Blu-ray is also clean and free from artifacts, like the 4K Ultra HD, but it looks flatter, not quite as 3D-ish Arri Alexa Mini, Panavision C-Series Lenses.

Godzilla: King of the Monsters comes with an English Dolby Atmos audio mix on both the 4K Ultra HD disc and the Blu-ray and it is as aggressive, dynamic, and — at times – hyperactive as one would expect from this big budget Hollywood monster movie. The overhead channels are put to great use and the low end is a monster in the best sense of the word. For all the bass-heads out there, this one pretty much announces itself as a subwoofer workout from the very opening.

This release comes with a well-rounded collection of making of featurettes exploring the production, casting, and special effects of the film. Plus we get a pretty good audio commentary and deleted scenes.

This sequel to the fun 2014 film misses the mark and instead offers a confused and dull Hollywood thriller that somehow manages to be boring even with so many more monsters added to the mix. Beside that, the 4K Ultra HD Combo does not disappoint on the audio/video front.

Godzilla: King of the Monsters is out on 4K Ultra HD Combo & Blu-ray August 27, 2019 from Warner Home Entertainment