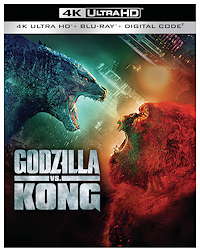 The next chapter in the Monsterverse, Godzilla vs. Kong, directed by Adam Wingard finds King Kong, the last of his kind, lonely and isolated in an advanced containment facility that mirrors his natural habitat under the watchful eye of his guardians, but he embarks on a journey to his real home that takes everyone through Hollow Earth, right through the center of the planet. His journey will awaken one other Titan, Godzilla, and a battle on the high seas ensues, putting Kong and the planet in jeopardy, but the two Titans will soon have an even bigger threat to face, Mechagodzilla, a cybernetic version of Godzilla developed by nefarious billionaire Walter Simmons (Demián Bichir) in order to destroy the creature. Eventually the two Titans must team up in order to defeat the robotic menace.

As much of a spectacle this film is, Godzilla vs. Kong lacks a cohesive narrative. The story really is all over the place and becomes somewhat difficult to follow. There’s the subplot with the teens including Mille Bobby Brown and Julian Dennison as they weirdly manage to break into a high security facility with hardly any effort at all and make an amazing discovery that seems wedged into the main plot just to give the film more set pieces.

That is really what this movie is, a string of action set pieces with little story in between. Godzilla and Kong battle on the sea. Godzilla and Kong battle in Hong Kong. Mechagodzilla appears and we get a battle royale between the Titans and the robot. Cities destroyed, people fleeing, etc. The visual effects are not always the most believable despite the advanced of CGI. The spaceship things the people fly in seem a little unrealistic and there are times where some of the motion especially in Kong looks weird and unnatural, but apart from these things the movie is still a fun adrenalin rush of action.

Godzilla vs. Kong was shot in 6.5K, uses a 4K DI, and arrives on 4K Ultra HD Blu-ray in a 2.39:1 HEVC 2160p (4K UHD) encodement with Dolby Vision HDR compatible with HDR10. This is a very solid, reference quality 4K disc all around. Detail is crisp and depth of field is nearly three dimensional. The Dolby Vision on my LG CX OLED provides lots of ‘pop’ in the specular highlights in things like the neon lights in the battle in Hong Kong or in the energy beams from the spaceships. While there are inky blacks and good nuance in the shadows, I found that the Blu-ray has better shadow detail while it does sacrifice the wider color gamut and ‘pop’ in highlights and it also doesn’t resolve the in-camera sensor ‘noise’ for lack of a better word as well, so the image, while hardly noisy, doesn’t look quite as clean as the 4K.

Godzilla vs. Kong is one of the films from Warner that premiered in theaters and on HBO Max simultaneously. The lossy Atmos stream on HBO Max was definitely deficient. It was mastered rather low requiring to be bumped up several db to get it to normal listening levels, but it was also severely dynamically compressed, making the low end especially lose lots of impact. Forget all of that as you spin up the lossless 4K Ultra HD disc (or Blu-ray which also has the Atmos mix) in this set. immediately you will notice that the mix sounds more precise, more expansive, you can hear the placement of sound effects in the soundfield better and what’s more, the dynamic range and low end are back. Kong’s footsteps, the explosions, Godzilla’s breath, the boom of those weird spaceship engines, they all have resounding LFE effects. This mix maybe even stays a little too loud all the time, but the action is great and there’s solid height awareness.

There are basic featurettes included that offer up interviews with the cast and crew talking up the franchise and film but also an audio commentary with the director. All special features are on the Blu-ray with the Audio Commentary appearing on both discs.

Over-the-top visual effects and action define this somewhat chaotic entry in the Monsterverse. The 4K and Blu-ray are both reference quality discs that will give your system a proper workout and the film despite its flaws is good popcorn fun.