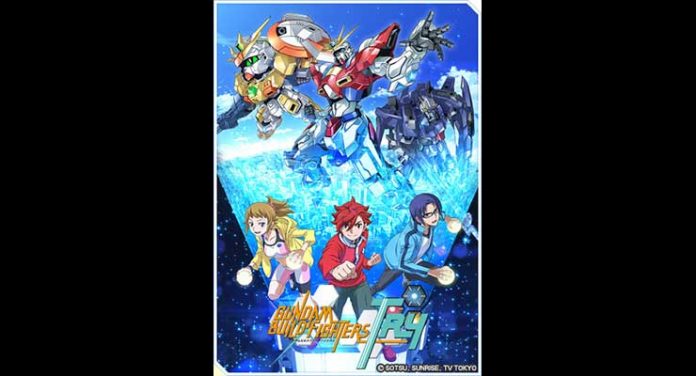 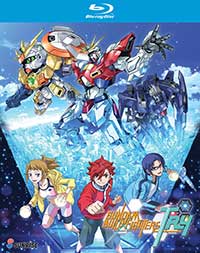 Gundam Build Fighters Try is set some seven years after Gundam Build Fighters when Iori Sei won the 7th Gunpla Battle Championship World Tournament. Now, the rules have changed, many of the Gunpla academies are gone, but the tournament is still going. Seiho Academy that Sei attended still exists, but the only member of the Gunpla battle club is Hoshino Fumina, and she is denied the ability to compete in the Battle Championship without a three member team. That is when she meets young martial arts enthusiast Kamiki Sekai, and convinces him to join the Gunpla club. Soon, Gunpla builder Kousaka Yuuma, who had withdrawn from Gunpla battle altogether because of an incident in his past, returns to rejoin the club, and Seiho Academy is back in competition. Fumina couldn’t be happier, especially when she realizes just how skilled her new recruit Sekai actually is. The team, now named ‘Try Fighters” takes the Gunpla world by storm with unexpected victories, and a lot of surprise hurdles along their way to what they hope is the ultimate prize.

For anyone who loves science fiction and mecha, especially the Gundam franchise, then Gundam Build Fighters Try will definitely be an enjoyable series to watch. It hardly slows down to let the viewer catch their breath and the visuals are, well, often breathtaking, if you’ll pardon the pun. There is also a fine balance of thrills and comedy over the course of its 25-episode arc. What does become evident, however, is that Gundam Build Fighters Try falls into a serious trap of repetitiveness pretty early on. We pretty much know how the episodes are going to play out; that is to say, there’s going to be a battle, it’s going to be pretty noisy and flashy, and Sekai is probably going to find yet another level of ability to be able to pull out a victory. This reminds me very much of Dragon Ball in that respect.

Gundam Build Fighters Try gets a gorgeous AVC 1080p transfer to Blu-ray of its digital animation. RightStuf’s release has nothing much to complain about apart from the very odd instance of barely visible banding. Colors look vibrant and the animation is sharp and free from anomalies like video noise, compression errors, or aliasing.

The original Japanese-language track and English dub are provided in LPCM 2.0 stereo mixes. These aren’t delicate and balanced mixes by any means. Given the material, one expects the mixes to be aggressive, but Gundam Build Fighters Try is audio on steroids. I had to scale the volume back a bit while watching the series. And, please do stick with Japanese cast while watching. I know there are dub fans, but the English cast is not up to snuff in anyway, shape, or form with the original Japanese cast, and this isn’t even a series that requires a lot of feeling or depth. The English cast just sounds either too over-the-top or too flat.

The list looks long, but much of what is included here is the usual promotional fare plus the clean animations. The two “featurettes” at least give brief overviews of the characters and Gunpla.

What we have here is ultimately a fun and action-packed Gundam series that has all the usual markings of a mecha franchise, like hints of the machines being nearly sentient, the operators becoming one with their mecha or Gunpla, and amazingly animated action sequences. Although it becomes repetitive over its 25 episodes, taken in smaller doses, Gundam Build Fighters Try packs a hard punch of action and comedy.