It’s year four and Harry Potter and the Goblet of Fire, now helmed by director Mike Newell (Great Expectations), finds Harry (Daniel Radcliffe) and his friends just a little older and dealing with typical growing pains – like finding a date to the school ball. There are also other issues at hand, like the dangerous Tri-Wizard Tournament that Hogwarts is hosting. The ancient Goblet of Fire, in which those witches and wizards who wish to compete in the tournament are meant to cast their names, has mysteriously drawn Harry Potter’s name from its fire although he is too young to compete. It is a binding contract he cannot break, and Sirius Black (Gary Oldman) has warned him that someone inside the school may be working against him. The tournament may be the least of his worries when it appears that the dark lord may be back.

Harry Potter and the Goblet of Fire was the darkest, most brooding film in the franchise yet, in keeping with the tradition set with the previous films. While Newell does balance out the darkness with the typical teen angst of young budding romances, unrequited loves and petty rivalries, those play second fiddle to the crux of the film’s storyline, which is very much a dark fantasy awash in dark curses, doom, and death.

Where the first entry in this series had some flaws with cheesy looking CGI, there are no major faults at all with the visual effects in Goblet of Fire, even given its 12-year-old vintage. This one is a stunning film to watch and a gripping narrative that is both intensely dramatic while also mindful of its family fantasy roots. Emma Watson and Rupert Grint return in their roles as Hermione and Ron, and further their characters’ impending romance with its early bumpy early teen start. 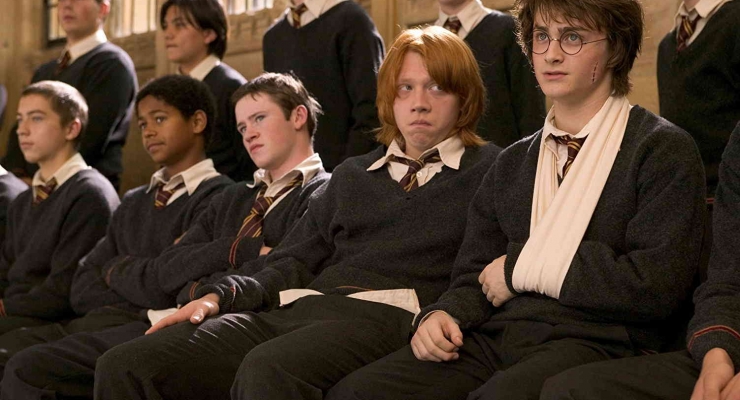 As with the three films before it, Harry Potter and the Goblet of Fire was shot in anamorphic Super 35 (3-perf) on 35mm Kodak Vision2 500T 5218, Vision 250D 5246, Vision 200T 5274, SFX 200T film stock with various Arri cameras. The film arrives on 4K Ultra HD Blu-ray in an HEVC 2160p (4K) encodement with HDR10 High Dynamic Range (HDR). It is without doubt the best looking of the first four films, mostly likely due to a combination of factors, from an increasing budget, better visual effects and slightly more recent vintage. The opening act with the Quidditch World Cup offers ample enough opportunity for the wide color gamut and broader contrast to shine with a brilliant display of colors and highlights in the form of fireworks, light shows and more. Straight through, this one is a winner with brilliant application of the HDR and organic, filmic look, and only the slightest hint of crush occasionally creeping up in some dark colors. That is offset by the nuance gained by things like a brilliant lamp peering out from the corner of a dark room or the bright orange glow of a fireplace glowing in a third of a room cloaked in inky shadows. Top notch.

Harry Potter and the Goblet of Fire comes with an amazing immersive DTS:X mix from Warner. From the dynamics of the score and sound effects to the added spatial depth of the “X” channels, this one is marvelously balanced and places you in the middle of the action. Standout moments are when Harry opens the first clue from the Tri-Wizard tournament underwater, when he has the broomstick chase with the dragon, and when he has the wand duel with Voldemort.

The special features included are all port-overs from the previous DVD and Blu-ray releases.

Is Harry Potter and the Goblet of Fire the finest film in the franchise? Possibly. It shakes off some of the childishness, wipes away the minor deficiencies with its visual effects and looks ahead to the darker final two films. This 4K Ultra HD Blu-ray reissue from Warner with HDR and DTS:X audio remix is the finest of the first four and must own disc for fans of the Wizarding World.

Harry Potter and the Goblet of Fire is out now on 4K Ultra HD Combo pack from Warner Bros.